#RESIdebate on the future of housing

The housing market is going through a period of rapid change. Build-to-rent, proptech and modular construction are just some of the things that are transforming the way the industry operates. 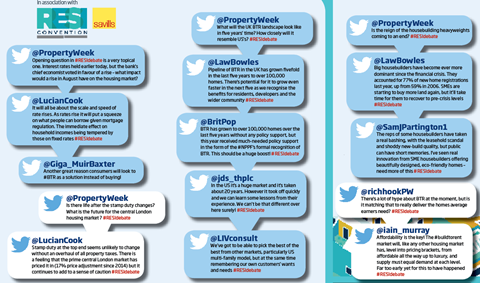 So what better subject for a Twitter debate ahead of this year’s RESI Convention than ‘reimagining the housing market’?

@PropertyWeek teamed up with @Savills under the hashtag #RESIdebate, more than 40 industry figures posed their questions to Savills’ director of residential research Lucian Cook and associate director Lawrence Bowles. The topics ranged far and wide, from stamp duty to modular homes.

The debate, which took place last week, clearly resonated with the industry, generating two million impressions from 200 tweets. Kicking off only minutes after the Monetary Policy Committee’s decision to keep interest rates unchanged, the first question was on the possible market consequences of a rise in the autumn.

Bowles predicted an increase by the end of 2018 with mortgage rates to follow. “With stress testing, that’s going to make access to mortgage finance more difficult over the coming years,” he added. Muir Baxter of GigaLiving pitched in to suggest that BTR would benefit as a result.

While interest rates didn't rise today, consensus is that they're due to increase by the end of 2018. Mortgage rates will follow suit. With stress testing, that's going to make access to mortgage finance more difficult over the coming years. #RESIdebate pic.twitter.com/Ike73Y1Vh8

Over time tenants will surely choose on-site landlords, better service, better amenities, longer lease if desired, more security in that lease. That all comes with BTR as long as they can afford the rent. #RESIdebate

There was consensus that the government had a key role to play in any successful reimagining of the housing market. Cook said: “Much depends on government policy and how successful it is at bringing SMEs and housing associations into the game. The Letwin Review is a sign that the government wants more of a return on its £44bn at a time when the big boys [major housebuilders] are developing as much as they did pre-crunch.”

Much depends on government policy & how successful it is at bringing SMEs and HAs into the game. The Letwin review is a sign that the gov't wants more of a return on their £44bn at a time when the big boys are developing as much as they did pre crunch

Here are some of the highlights of the #RESIdebate to whet your appetite. For more of the same – plus expert commentary on many of the industry’s other burning questions – make sure to book your place for the all-new RESI Convention this September.

Affordable housing delivery is low by historical standards. So any additional investment is very welcome, whether that's in the form of government support or the private sector getting stuck in #RESIdebate pic.twitter.com/NHKLrlaNt5

And an increasing appetite to joint venture with private developers and others in the sector pic.twitter.com/aYRexdaddU

Agreed, London maybe close in five years but the rest of the country is just starting to build and it will be a while till #BTR takes over

Affordable housing delivery is low by historical standards. So any additional investment is very welcome, whether that's in the form of government support or the private sector getting stuck in #RESIdebate pic.twitter.com/NHKLrlaNt5

Preparation & a product of the fact that @Savills research department does circa 350 presentations a year! Just for you heres one I have't used yet... #RESIdebate pic.twitter.com/Khysetq4cC

Big housebuilders have become more ever more dominant since the financial crisis. They accounted for 77% of new home registrations last year, up from 59% in 2006.
SMEs are starting to buy more land again, but it'll take time for them to recover to pre crisis levels #RESIdebate pic.twitter.com/wlhvgkxL1T

The reps of some housebuilders has taken a real bashing, with the leasehold scandal and shoddy new-build quality but public can have short memories. I've seen real innovation from SME housebuilders - offering beautifully designed, eco-friendly homes-need more of this #residebate https://t.co/7kANyPn1dZ

Like many (recently 50) year olds, the idea of Micro-living fills me with dread! However, I'm not 20 and looking for an affordable housing solution, so if we have it, it needs to be fantastically designed and have amazing service levels. Addendum, I'd live on a boat! #RESIdebate

There is a gap: reduction in BTL stock looks like it will come before BTR hits its stride. Additional clarity in the planning process and more government support could help deliver that BTR pipeline quicker

We've got to be able to pick the best of the best from other markets, particularly US Multi-family model, but at the same time remembering our own customers wants and needs. #RESIdebate #BUILDTORENT