“That’s the street they used in the advert,” sighs Paul Honeywood, cabinet member for housing at Tendring District Council. 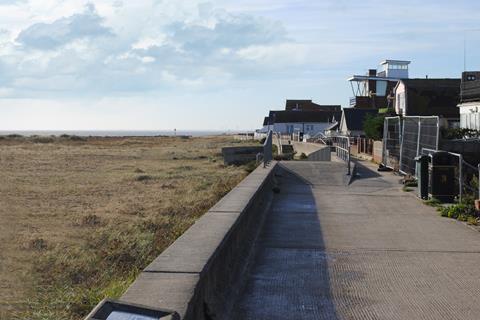 The street in question? Essex Avenue in Jaywick Sands, Essex, which briefly became notorious when a picture of it was used anonymously – and incongruously – in an advert in the build-up to the recent US midterm elections by Republican candidate Nick Stella. The candidate emblazoned the words ‘Only YOU can stop this from becoming REALITY!’ across a picture of the dilapidated street.

For Honeywood, the episode was yet another kick in the teeth for a community that has received a great deal of negative media attention since it was named the most deprived ward in England by the government in 2015.

Honeywood does not deny that Jaywick Sands still has its problems, but he says some of the coverage has been highly misleading, noting that on one occasion tabloid hacks gave a group of young local people booze and then interviewed them when they were drunk.

He also points out that the community has changed dramatically since 2015. Certainly, on a crisp, bight autumnal day last week, I found it virtually unrecognisable from the advert. For a start, the street has been properly paved. So what does the future look like for Jaywick Sands?

In the past three years, the council has worked hard to turn the area around. Part of the challenge facing it was that Jaywick Sands was never meant to be a year-round settlement. The community started life in the 1920s and 1930s, when aspirational Londoners bought up plots from a local landowner and built summer homes, which they could reach via the railway or the new and exciting motorcar. Pictures from the time show smart vehicles parked up along the beachfront: this was not a deprived community. 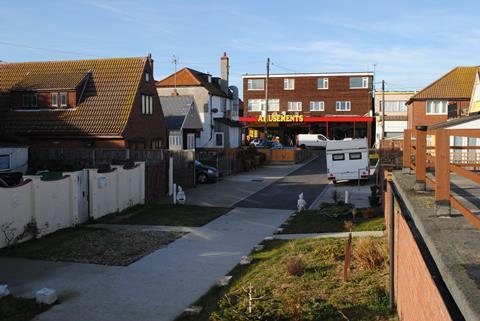 Word on the street: Essex Avenue (which has since been resurfaced) in Jaywick Sands featured in a US midterm election advert

Then came the Second World War and, more specifically, the Blitz. Scores of people bombed out of the East End moved to Jaywick Sands and started to occupy properties on a year-round basis, leading to a cat-and-mouse game between the council and the landowner. The council complained about the lack of running water and drainage. Reluctantly, the landowner installed them.

However, nothing could disguise the fact that this was not meant to be a permanent community. The roads were unadopted by the public authorities and became ever more dilapidated; the homes lacked heating and many were riddled with asbestos. Over the years, Jaywick Sands became less and less fit for human occupation.

By 1970, the council felt it had no choice but to attempt to force the sale of the homes and launched 770 compulsory purchase orders (CPOs), all of which failed.

In the 1980s, regeneration consultants were brought in and masterplans drawn up, all of which involved phased demolition. They failed too after vociferous protests from residents. By this point, Jaywick Sands was an established community.

“You get to the point where there are all these masterplans, but they’re all rejected by the community,” says Paul Price, head of operational service at Tendring District Council, who was previously in charge of managing the Barbican estate for the City of London Corporation.

“There was a meeting where the police had to be called in to escort officers and councillors out of the building. You’re talking about mass demolition of homes and people opposed it.”

Fast-forward a few decades and Jaywick Sands was being used as a political football by parties of all colours, with prospective councillors lining up to promise the earth in terms of funding from central government.

After watching those promises turn to dust, Honeywood decided that a different approach was needed when he was a candidate in the 2013 local elections.

“When I stood, I said: ‘If you vote for me, there is no money from government and very little from district or county council,’” he recalls. “But I also said I had an idea to get private investors involved. They’ve got lots of money, they want to make lots of money, but along the way the community would get new facilities. Voters just have to accept that the investors are in it for a profit and most people said: ‘I don’t have a problem with that.’” 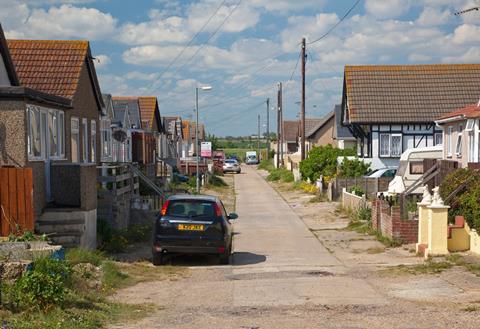 After winning the election, Honeywood – who is also a councillor on Essex County Council – set about making good on his pledge. Working with Price, he secured £6.5m from the county council, which was used to pave the roads.

Next, Tendring council started buying up land, but not primarily in Jaywick Sands. Instead, Honeywood and Price concentrated on land between the area and Clacton to the east. It wasn’t always easy, concedes Honeywood.

“Some of these people can be difficult characters to deal with,” he says. “We had some offshore accounts, land owned by a trust based in Lichtenstein, somebody who is a Panamanian citizen… but I started to do deals and I managed to acquire about 28 ha of land fairly quickly.”

The idea was that instead of issuing CPOs and bulldozing people’s homes, the council would develop a new coastal community.

“What we want to do is buy land to build a better housing offer; to see if we can encourage people from [Jaywick Sands] into better properties,” says Honeywood. “We decided to work with the community rather than against it. People don’t have to move, but the new coastal village will provide better housing.”

A new body has been established to drive forward the regeneration plans under the government’s Coastal Community Team initiative and the organisation is working to overcome multiple issues, not least the fact that Jaywick Sands is in an area of high flood risk. The 1953 flood disaster claimed the lives of 33 people and a tidal surge in December 2013 came within an inch of breaching flood defences.

Then there is the matter of stopping the area from being so attractive to absentee landlords. This was already the case, but changes to the way in which housing benefit was calculated in 2009 made matters much worse. Previously, Jaywick Sands was its own reference area for housing benefit purposes, but the changes mean that a much wider area, covering both Tendring and Colchester, is now used as the reference point.

“It hasn’t helped the situation,” says Price. “We’re looking at how you link property condition with benefit levels. There is a lot of nervousness around that, but we’re having constructive conversations with government.”

The Housing & Finance Institute is working at a community level to help improve other aspects of life in Jaywick Sands, but from a physical regeneration point of the view, the priority is the new settlement and in order to make that a success, Honeywood and Price know they need outside help.

“We don’t have the expertise or the resources to develop all this out,” says Price. “We can either parcel up sections or land and put them out to the market or we go for one big bang – we’ve been talking to the likes of L&G and Cheyne – but on the back of doing this we’ve already got more private sector interest.” 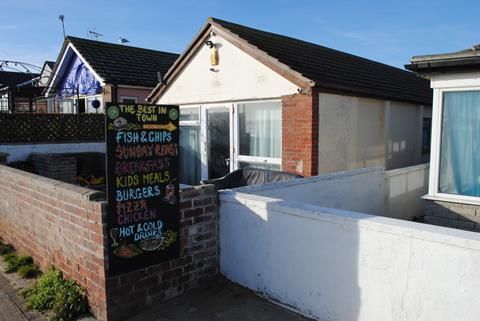 In terms of the existing settlement at Jaywick Sands, the council itself is leading the charge and is on site with a 10-unit project, with five units for social rent and five for submarket sale to local people. In recent weeks it has also granted planning permission for four private-sector-led residential developments within the existing footprint. At the time of Property Week’s visit, another application had just been submitted.

“The interesting thing is that we didn’t get any objections to any of the applications,” says Honeywood. “If it had been anywhere else in Tendring, we would have had to move the planning committee meeting into the theatre in the town hall in order to accommodate objectors.”

Those private developers, of course, were only attracted to the area because property values are rising, something that was prompted by the council’s investment and future plans.

“I was talking to a developer who was looking to do another one and he was complaining that the cost of land had gone up,” says Honeywood. “At the beginning of this, any property you built was worth less than the cost of building it, which was the problem we faced. Developers wouldn’t be doing this if they couldn’t make a profit.”

Honeywood and Price believe that despite the bizarre use of a badly out-of-date picture of Jaywick Sands in that aforementioned US midterm political ad, public perception of Jaywick Sands is slowly starting to change for the better.

The hope is that in a few years’ time the national press will be more interested in reporting on regeneration and rising property values in the area than reliving its less-than-prosperous past.