A Shakespearean theatre is poised to play an important role in a £750m mixed-use development in Shoreditch. 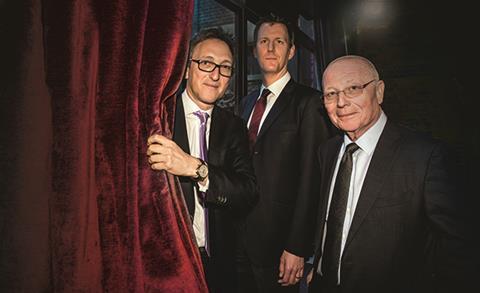 “All the world’s a stage, and all the men and women merely players,” wrote Shakespeare.

Fittingly, one of the biggest ‘stages’ in London at the moment is a 2.5-acre site in Shoreditch where a £750m mixed-use development is taking shape on the site of the 16th-century Curtain Theatre, where Henry V is believed to have first been performed.

When fully built out, the scheme will offer 32,668 sq ft of retail, 205,634 sq ft of office space, a 37-storey residential tower and, perhaps most intriguingly of all, a historic Shakespearean playhouse visitor attraction.

The ‘players’ in this production, aptly christened The Stage, are joint venture partners Cain Hoy, Galliard Homes, McCourt, Vanke and The Estate Office Shoreditch, which acquired the site two years ago.

Property Week visited the site to find out how the commercial element is progressing and how the developers intend to deal with a structure of such historical importance.

US private equity firm Cain Hoy and Galliard Homes were appointed funding and development partners for The Stage by the Bard family’s Plough Yard Developments in spring 2015.

Jonathan Goldstein, chief executive of Cain Hoy, says the partners bought the site with planning and were fully aware of the existence of the Curtain Theatre.

“We’re very excited and enthused by the opportunity to unlock something of such historical importance,” says Goldstein. “It’s quite an honour to be involved in this and it’s quite exciting.”

To ensure the theatre was protected during construction, which will complete in 2019, the developers have been working closely with the Museum of London Archaeology (MOLA), which carried out a detailed dig of the site in spring last year. 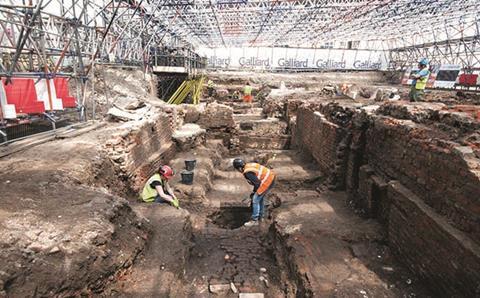 As well as establishing that the theatre’s structure was rectangular, archaeologists discovered fragments of a bird whistle and a bone comb.

The Curtain is one of Shakespeare’s least-documented theatres, but experts believe that Henry V was first performed there and that other plays such as Romeo and Juliet and Every Man in His Humour would have also been staged there.

Hence the developers’ keenness to preserve the theatre in an international visitors’ centre. Goldstein thinks it could attract as many as 500,000 visitors a year.

“The Globe gets a million visitors a year down on the South Bank. Now the Globe is a wonderful site with two new reproduction theatres, but we’ve got the genuine situation here,” he says. 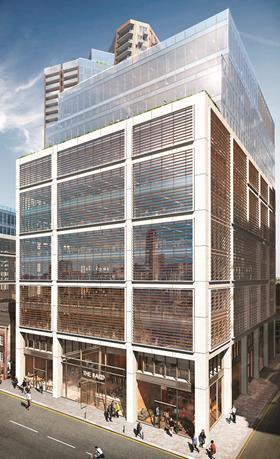 The Bard building at The Stage

The developers are currently in discussions with Hackney Borough Council to create an enlarged footprint for the theatre, which has been temporarily protected by a combination of sand, plywood, high-density polystyrene blocks and a slab of concrete that will stay in place during the construction of the rest of the site.

“The council has been extremely supportive,” says Goldstein.

“What we would like to do is make something bigger than what we initially got planning for. We want to create a Shakespearean experience where people go underground.”

To deliver this ambitious vision, the development partners are hoping to purchase three buildings - a pub and two small office blocks - that sit adjacent to the theatre.

“We’ve made no secret of the fact that we would like to acquire them,” says Goldstein.

“We’ve tried to acquire the pub from the pub company, but so far we haven’t had any success.

“They are sites we would like to bring into our ownership so that we can expand the footprint of the museum underground.”

Around £25m will be invested into preserving the theatre and creating the visitors’ centre, and in recognition of the development partners’ expenditure, the local council “deleted” the social housing element from The Stage’s residential tower. Visitors will have to pay an entry price to the theatre, but this is only being imposed to cover the cost of the day-to-day operation of the attraction.

The prospect of restoring the fortunes of the historic theatre proved an irresistible draw to development partner Vanke, according to Stephen Conway, chief executive of Galliard.

“This is Vanke’s first development situation in London and they were really keen to get involved because of the Shakespeare connection, so they came in and co-invested with us at an early stage,” says Conway. “We’re excited to be working with them to see where that leads.”

Although the theatre’s ability to drive footfall to the site is important to the development team, the main focus at the moment is pushing forward the commercial aspects of the site.

The residential tower has already proven a hit. Of the 421 residential apartments being delivered, almost 30% have been sold, according to Goldstein. Now the developer is actively starting to market the scheme’s office space, which covers two buildings: a 70,000 sq ft block called The Hewett and a 137,000 sq ft space called The Bard.

New York-based gym group Equinox has taken 30,000 sq ft in The Hewett for its second London gym and Goldstein says there has been strong interest from technology and media companies in The Bard in particular, not least because the site sits next door to Amazon’s new 500,000 sq ft-plus UK headquarters at Principal Place and is a short walk from the Silicon Roundabout at Old Street.

“What has happened over the last five to 10 years is that a lot of the technology companies that initially started out on the road to Heathrow airport and in places surrounding it like Slough and Reading have realised that in the war for talent people want to work and be in the middle of London,” says Goldstein.

“That’s why so many media companies have moved into town. You’ve seen that with Apple down at Battersea, you’ve seen it with Facebook and Google and Amazon here, which is a massive hub for the company. That’s why a lot of people have shown early interest in that building [The Bard].”

Watch: The Stage - regeneration in action

It is a view shared by Conway, who believes the location is second to none. “Shoreditch attracts the geeks and the high-tech guys who want the nightlife and the café culture and that’s what this building is designed for,” says Conway.

“This has got better transport links than Old Street. The roundabout was very successful and the rents went through the roof, but this is closer to the City, closer to Liverpool Street Station and closer to Amazon, so this should achieve premium rents compared with that area.”

While the developers are not currently focusing on rents, Goldstein has a figure in mind. “If you look at the comparables in the marketplace, the average rent achieved in the Old Street area in the last year or so was around £65/sq ft to £70/sq ft. It will be up to those people who come here to decide whether they think this is better or worse than those areas, but that’s the ballpark number we’re looking at.”

The scheme is being built speculatively, but Goldstein insists he is not concerned about the company’s exposure despite the level of uncertainty in the market.

“We’re believers in London - it’s as simple as that,” he explains. “Stephen has got 5,000 to 6,000 units around London, a lot of which are pre-sold, but a lot of them are still speculative because you can’t sell them all, as much as you would like to, and it’s the same with offices.

“There is a limited amount of office stock coming on to the market at the moment and Derwent has shown with the White Collar Factory up at Old Street how well you can do in the area.

“That’s an example of a prime company bringing a premium office to the marketplace and we’re hoping to do the same thing here with a very focused, quality offering in the middle of Shoreditch.” 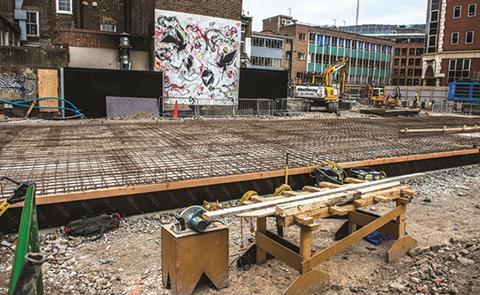 He says that early interest in the commercial elements show his confidence is justified, although he admits there is a “long way from confidence to getting someone to sign a lease”.

So isn’t Goldstein worried about the ‘B’ word? “Burnley? We beat them 2-0 on Saturday,” jokes the die-hard Spurs fan.

We are still going to be the centre of what is a European market - Stephen Conway, Galliard

“The reality is we are on a journey now as a country and we can spend forever talking about what that journey is going to be like or we can focus on what we can control over the course of the next 18 months before the government comes back to us with a picture of what the world for England is going to look like post Brexit.

“In the meantime, if you believe in London the way that we do and if you’ve got quality sites, quality offerings and quality partners then that will overcome most of the political shenanigans that will go on.”

It is still early days for the office space and earlier still for The Stage’s retail and leisure space, which will be marketed closer to the scheme’s completion date, not to mention the 19th-century railway viaduct that borders one side of the site and is currently housing the marketing suite for the scheme.

However, ambitious plans are afoot. “We’re going for A1 and A2 at the viaduct and we may look to apply for A3 use in due course,” says Robert Allan, development director at Cain Hoy. 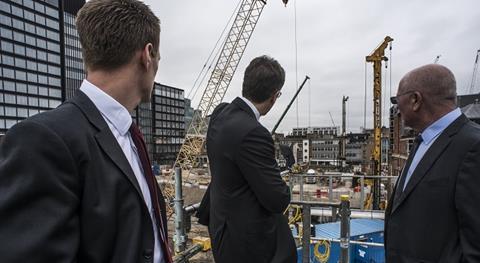 Goldstein, Conway and Allan have a grand vision for the future of The Stage

“The viaduct will have a ‘pocket park’ on top of it, which is very unique and different for Shoreditch and the surrounding area because there is very little green space.

“This scheme is a truly mixed-use development and for a site that’s only two-and-a-half acres it’s doing an awful lot.”

Indeed it is, which is why the stage is very definitely set for The Stage to become a major player in the London property market.