Locals are aware of the hidden gem that is the area around Waterloo station, but for the majority of people who pass through it en route to and from the South Bank, it consists of a series of seemingly impenetrable underpasses and roundabouts surrounding the station and little else.

However, Lambeth Council and the local BID, We Are Waterloo, are hoping to change that.

Having regenerated Lower Marsh market - which made it to the finals of the 2016 Great British High Street Awards - they are now intent on improving the area’s connectivity and permeability.

As part of the ongoing redevelopment of Waterloo station, London and Continental Railways (LCR) is bringing into use long-concealed Victorian arches to form a new street north of the railway tracks.

One of Waterloo’s most recognisable landmarks is the Leake Street tunnel - London’s largest legal graffiti wall - which links Lower Marsh to the South Bank and is home to the acclaimed arts and entertainment venue The Vaults.

The arches adjacent to the tunnel, once home to a bonded whisky warehouse, have been used for storage for decades. But now LCR is transforming them into eight units, totalling 23,350 sq ft, which will be occupied primarily by creative and independent restaurant, bar and café operators. It will be “a street gallery with restaurants in”, says LCR development director Adrian Lee.

We want people to discover it and tell their friends they’ve found this amazing place - Adrian Lee, LCR

To achieve the desired tenant mix, LCR, supported by development consultant Union Street Partners, plans to curate the space by reaching out to up-and-coming food, beverage and entertainment operators. For most, it will be their first or second permanent location in London and they will be encouraged to play an active role in determining the fit-out.

“You have to have that leap of faith when it comes to regenerating areas and it was quite hard at first to picture what it might become,” explains Lee.

“We first thought it’d be a great space for a gym, but once we had a greater understanding of the area, we thought it could be so much more. Now we have somewhere where there’ll be much more activity and a whole blend of different people.”

Tunnel on Addington Street and link to Leake St

The aim is to make Leake Street attractive to as wide an audience as possible.

Six of the eight units have already been leased to: Aures London, which claims to be the UK’s first custom-built acoustic event space; The Italian Job, a pub serving Italian street food and craft beers; an as-yet-unnamed French bistro that has chosen the arches for its first venture outside Paris; gourmet chicken restaurant Mother Clucker; and Squint/Opera, a creative studio collaboration between chefs, artists, musicians and producers, which has taken two units.

“We’re really hands-on when it comes to finding operators,” says LCR development manager Duko Frankhuizen. “We’ve worked closely with our agents and there’s been a lot of leg work actively reaching out to operators that we think will fit, meeting them and building a relationship with them.”

Lee adds: “We went to food festivals and micro-breweries. Visiting people in their places has been absolutely critical.”

The first tenants will open for business in August and it is anticipated all units will be up and running before Christmas. When fully opened, Frankhuizen hopes Leake Street Arches will change people’s perception of what they go to Waterloo for and make the area just as much of a pull as the major attractions on the South Bank. 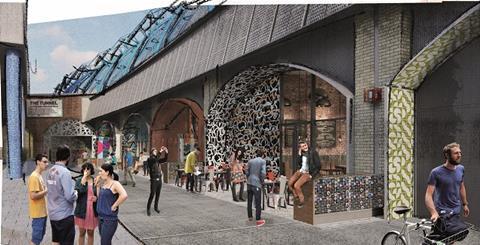 But don’t expect LCR to start singing from the rooftops about the project. “We don’t want this to be a branded development and we don’t want to shout about it too much,” says Lee.

“We want people to discover it and tell their friends they’ve found this amazing place. Leake Street doesn’t have to be the biggest blob on the map, but it will be a blob.”

If LCR is successful in its aspirations, this ‘blob’ will be another place from which to gaze on Waterloo’s famous sunset.