Welcome to Sarajevo: the green shoots of a property recovery

It has been a long time coming, but Sarajevo is finally seeing green shoots of recovery.

Perched on a sofa in the lobby of the Hotel Holiday, in Sarajevo, photojournalist Paul Lowe peers into the cavernous space above him. The popular joke, he says, was that you knew it was a socialist hotel because from this spot in the inner sanctum you can see the door to every bedroom on the balconies above - so the administration would always know who was seeing whom.

The huge, brutalist structure - once called the Holiday Inn - was designed by Ivan Štraus to host the Winter Olympics of 1984. Back then, the city was the jewel in the crown of the economic and cultural powerhouse of Josip Tito’s Yugoslavia, but in 1992 disaster struck.

“That’s the room from which [snipers loyal to the leader of the Bosnian Serbs] Radovan Karadžić fired the first shots of the war,” says Lowe, pointing upstairs. At least 100,000 people were killed in the conflict that followed between the country’s three ethnic groups.

As war ravaged the country, Bosnian Serb forces surrounded the multicultural and richly historical Bosnian capital of Sarajevo, laying siege to it for nearly four years - the longest siege of a capital city in modern history. Shells fell daily on the city; snipers took pot-shots at men, women and children as they scurried to collect water.

The Holiday Inn was the only hotel to function throughout the war - waiters still wore carefully ironed shirts and dinner jackets - and it became the home of the international press corps, as journalists, including Lowe, moved in to enjoy its intermittent running water and electricity supply provided by on-site generators run on oil.

The building was one of the iconic symbols of the war and today it is considered a symbol of hope for the city. After the war came to an end in November 1995, thanks to the Dayton Peace Agreement, the holes in the bright yellow façade of the hotel were patched up. It has taken almost two decades for the hotel to be restored to something close to its former glory, but after being bought last year by the Hotel Europe group, it is in the midst of a multimillion-euro refurbishment programme.

The long-running saga surrounding the rebirth of the Hotel Holiday is one that has played out across numerous buildings throughout Sarajevo, which finally seems to be seeing green shoots of recovery. Today, although the scars of war are visible - buildings in the city are still pockmarked by bullets - the nation is on an upward trajectory.

Bosnia’s tourism industry is growing fast, with foreign tourism up 14.5% in 2016 on the previous year. The country’s rich history - including its socialist era and conflict - is proving to be a significant draw for visitors from the US, Europe and particularly the Middle East, who like to take a break in the cooler climes of a European country with a familiarly Muslim culture.

Although the scars of war are visible on buildings, the nation is on an upward trajectory

Sarajevo is also proving attractive to overseas property investors looking to capitalise on the city’s commercial renaissance. But it has been a long, hard slog.

After warring factions laid down their arms in 1995, work began to restore some semblance of normality in a country that had just seen Europe’s worst atrocities since the Second World War. Around 60% of buildings in Sarajevo had been damaged or destroyed during the conflict, although aside from buildings near the front lines and a few political and cultural buildings targeted for symbolic reasons, many buildings were still structurally intact.

Architect Jean-François Daoulas, former head of urban planning for the United Nations bureau for reconstruction in Sarajevo, told Property Week that the first tasks tackled were basic repairs, such as replacing broken windows, restoring electricity and water supply and patching up shell-damaged roads. At the time, he says, the concept was simply to rebuild - there was no new urban plan and little appetite for innovation.

“It was a real problem to propose something different than what had been there before,” says Daoulas regretfully. “I was fighting to make a project for the future, but they wanted a project for now.”

Billions of US dollars, mostly from international donors, poured into the reconstruction effort. Bosnia’s national library called the Vijećnica - an elaborate Austro-Hungarian masterpiece built in 1891 and completely destroyed in 1992 by shells launched by Bosnian Serbs stationed in the hills - began, fitfully, to be restored.

Reconstruction was carried out in four stages over a staggering 18 years, in a process frustrated by the chaos that reigned as the country acclimatised to a new and fiendishly complex power-sharing political system.

“The Austrian government gave the first grant of around $1m (£815,000) in 1996. I was assigned to the job, but I was in a dilemma of what to do with $1m against the background of such destruction,” says architect Ferhad Mulabegovic, who led the project. The library finally reopened in 2014.

According to Daoulas, town planning has been hampered since the war by the fractured governance system installed by the Dayton Agreement, which divides the country into two semi-autonomous entities, the Serb-led Republika Srpska and the mostly Muslim Federation of Bosnia and Herzegovina.

The two entities have different administrative structures and separate urban plans, meaning they can have no common projects, he explains. Despite such challenges, not to mention reports that organised crime was taking hold, commercial investment began to trickle in as developers spied unexploited opportunities in this raw, emerging market.

The iconic Unis Towers have been replaced by the Unitic Business Centre - Source: Jim Marshall

Mejrema Zatric, who studied architecture in Sarajevo in the 2000s, remembers the first big development that moved away from the programme of mere reconstruction of buildings destroyed during the war.

Bosmal - for Bosnian Malaysian, since the €120m (£104m) investment came from Malaysia and Bosnian investors - was an 118m-high mixed-use tower focused on residential units, which “brought in a new typology” to the city in 2001, says Zatric.

The development, designed by architect Sead Golos - who would go on to work on many of Sarajevo’s new developments - was considered a flop by locals, as it suffered from high vacancy rates for years.

Similarly, the country’s first modern shopping mall, Alta, opened in 2008. But, says Uros Vukomanovic of Colliers International, which covers Bosnia from its office in neighbouring Serbia, this too was “problematic”.

As the leasing agent, Colliers struggled to find sufficient demand to meet the new supply of retail units, since purchasing power in Bosnia was still very low.

Vacancy rates have dipped in the past few years and this part of the commercial sector is gaining a stronger foothold - Uros Vukomanovic, Colliers International

Despite such teething problems, foreign investment has continued to flow in, especially from Arabic countries. The BBI Centar - a mixed-use mall development focused around a central square, which is now a buzzing meeting place for locals - opened in April 2009 and is 99% backed by the Saudi Arabia-based Islamic Development Bank.

The retail occupier outlook has also improved. “Vacancy rates have dipped in the past few years and this part of the commercial sector is gaining a stronger foothold,” says Vukomanovic.

As the global financial crisis hit home, new projects slowed down, but a new mini-boom now appears to be happening. Another Saudi-backed mall opened in 2014, called Sarajevo City Centre, whose huge gaudy screens and tower taller than that of the nearby parliament building drew criticism from locals. 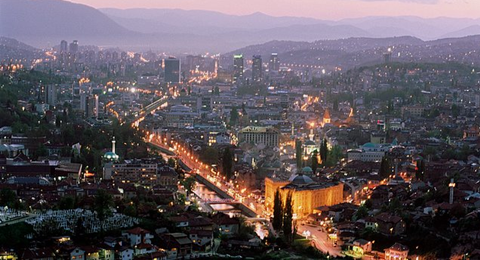 In addition to malls and hotels - such as the Hotel Bristol, another pre-war icon reopened by Arab investors in 2011 - the newest spending spree is focused on gated residential developments. For example, Poljine Hills, a recently launched 211-villa gated community, is situated 15 minutes’ drive from the city, with prices starting at €230,000 for a three-bedroom villa.

According to Daoulas, there are now 13 similar developments in the Sarajevo area, and developers are taking advantage of flexible urban planning regulations - in which a municipality can allow projects to go ahead that are not included in the town plan - to attract money from the Middle East.

Bosko Tomasevic, head of the south-east Europe region for JLL, expects further money to flood into Sarajevo across all property sectors. There are better deals on offer in Bosnia than in other eastern European countries such as Poland or Hungary, he says, citing high demand for office space, with only six dedicated office developments at present and vacancy rates of less than 10%.

“Money is cheap now, so [investors] want to spend it and if they have the courage to come into this market, the returns are much larger than in any other country in the region,” says Tomasevic.

If investors have the courage, the returns are much larger than in any other country in the region - Bosko Tomasevic, JLL

The other growing attraction of investing in the region is the slowly loosening regulation. Bosnia has aspirations of joining the EU and, as a result, the government is looking to press on with a raft of legal reforms replacing the previously burdensome administrative regime.

Because Sarajevo is lodged in a valley with little space for expansion, Daoulas hopes that in the future some of the city’s existing Austro-Hungarian and socialist buildings - many of which lie vacant or underused - could be rehabilitated, just like the former Holiday Inn. 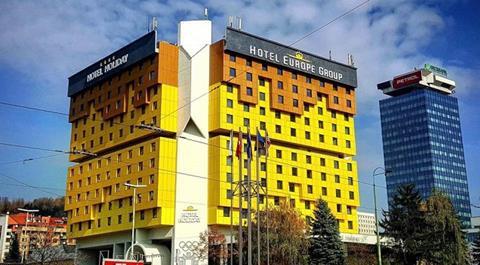 The renamed Hotel Holiday reopened in September last year and, once the refurbishment programme has been completed, it hopes to snag a five-star rating, which will put it back on the international map for the right reasons.

“The Hotel Holiday is a symbol of the city,” says Azra Celik, sales manager. “We have had to work hard to tell the new story of the hotel. It’s been a challenge, but we want to say that the Hotel Holiday is not its past - we are focusing on the future.”