What’s in store for logistics?

Savills, db symmetry and Property Week brought together a panel of experts for the second annual Logistics Spotlight event, which followed this summer’s census survey of the industrial market. The hot topics of discussion were Brexit, rising rents and advances in technology. 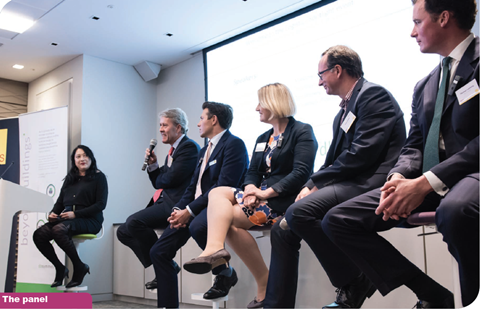 With Brexit just around the corner, it was little wonder the topic was top of the agenda when a panel of experts came together to debate the state of the industrial and logistics market at the second annual Logistics Spotlight event.

Hosted by Savills, db symmetry and Property Week, the event followed the annual census survey of the market that ran throughout the summer and featured in Property Week last month. The starting point of the discussion was Brexit and what impact it is expected to have on demand in the sector.

Representing the views of occupiers, Kurt Mather, head of real estate at TNT UK, said whatever Brexit deal is negotiated it will have a big bearing on the company’s future space requirements.

“We have a specific Brexit team that is looking at all the potential outcomes,” he said. “For a company like us, whatever type of Brexit occurs it will have a big influence on what we do or don’t need to take in the future.

“The worst-case scenario is that we need to take a lot more space to hold goods while they go through some kind of customs check. The best case is that it stays roughly as it is and we can move things as quickly as we do now.”

Brexit only a short-term issue

Sally Bruer, head of research at Tritax, pointed out that Brexit was a short-term issue for the sector.

“We have little idea of what might happen,” she said. “It will come down to perception of risk and how businesses mitigate that risk even if it doesn’t materialise. If it is important to have goods available then it will be important to hold stock where required without the risk of those products being held up for a longer period of time at the border.

“That may then translate from a perception of risk into a requirement of more stock, which might mean more space requirements in the short term. In the longer term, as we start to better understand what Brexit will look like, businesses will have better ability to plan around those new border controls.”

Andrew Jones, chief executive of LondonMetric, agreed adding that Brexit was seen as a short-term disruption for most investors. He said: “Is it an opportunity or a threat to the sector? Well, we’ve just heard that a bad Brexit will result in occupiers taking more space and the best-case scenario is that take-up will stay the same.

“This is a short-term disruption. It is not going to affect our decisions on how much money we commit to this sector.

“We believe the bigger issue in this sector is the impact technology is having on our lives – how consumers decide to live, shop and work. That leads to an attractive demand-supply equilibrium. The outlook – whether we have a no deal, good Brexit or bad Brexit – is that the structural changes in shopping habits and delivery expectations mean we will continue to enjoy a strong demand equilibrium.”

The census responses of more than 100 occupiers showed that rising rents were their number one concern for the sector. Mather insisted the rate at which rents had risen in the past two years was unsustainable for the market and predicted that a number of third-party logistics operators (3PLs) would go out of business if rents continued to rocket.

“There has to be a point where the developers and the investors realise they won’t have a development or investment without the occupier, so it can’t carry on as it is with rents rising.

“What will happen is that less secure logistics 3PLs will go under, which will have an adjustment on rental levels because the big boys who are still there won’t be willing to pay the rental levels. Hopefully, we won’t get to that position and there will be a sensible discussion between all the parties.”

The census also found that spec development was on the agenda for most developers. In his state of the market presentation at the event, Savills’ head of research for industrial and logistics Kevin Mofid stated that 10.2m sq ft of spec buildings is currently being developed.

That volume was last seen pre-recession, so is it a cause for concern? Tom Leeming, development director at db symmetry, maintained it was not. “If you look at the credentials of the market and structure of the market it is completely different to 10 years ago,” he said.

“In 2007/08, there was consecutively 10m sq ft of spec brought to the market on the back of 25% vacancy rates. That vacancy rate has now fallen close to 6%, which is eight months’ supply, so I think spec development is at a sensible level. Developers are looking more forensically at the market. The environment feels right for spec development in the right location.”

Toby Green, head of London and south east national industrial and logistics at Savills, agreed, adding: “The running five-year average for take-up was 20m sq ft a year pre-recession, it’s 28m sq ft now. What’s really comforting if you look at the major deals that have happened this year is it’s a nice spread – it’s not just from one sector. There are occupiers out there who need to get going and get going quickly.”

Technological advances were also a hot topic among the panellists. The census found that occupiers considered technology that enabled visibility of stock to be a game-changer.

Bruer said: “Occupiers put great importance on understanding where the products are and the relationship between warehouse and logistics operations and retail store operations to get them to the consumer in the way that the consumer wants them to be.

“That’s using urban delivery hubs, centralised big-box warehouses and efficient operations to ensure they’re in the right place at the right time and even using shops and stores as logistics platforms.”

However, Jones countered: “The only problem you’ve got when you talk about storing in shops is that it is quite expensive. Shop rents are not £5/sq ft. It’s all very well talking about this hypothetically but it’s not going to work unless we get a complete rebasing of retail rents. We are talking about back of store rents having to crater for this to work.

“Using a store to deliver your online orders is great because you’ve got space and you’re paying the rent but it’s not where you’d start when our average rents are £24/sq ft.

“What might happen is, for example, a 100,000 sq ft supermarket might have the retail side paying the £22-23/sq ft and the back storage areas at £5/sq ft for it to work efficiently.”