A work culture that stimulates is key

Editor: Google’s bet on the office is further evidence that the so-called work-from-home revolution is by no means a done deal. The global tech company joins a growing list of business giants who believe that investment in high-quality real estate forms a crucial part of a successful hybrid work model. 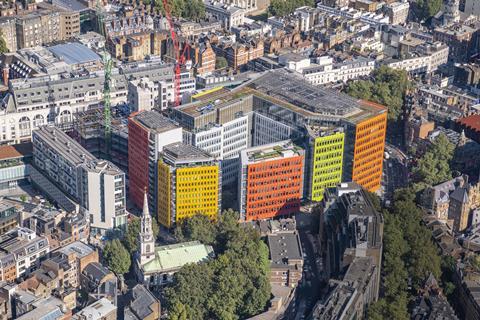 Back to the office: Google’s London HQ, Central Saint Giles

It comes as no great surprise that one of history’s most successful enterprises wants its workers to be around each other. Teams need to be together to build rapport, brainstorm ideas and deliver them creatively and efficiently. Bonding with colleagues, and the cultural dynamic that follows, is a key ingredient of any successful business.

Google boss Ronan Harris described the acquisition as a “commitment to rebuild” – a claim that goes to the very heart of what the debate is all about. Investors, developers and landlords would be wise to recognise that occupiers now expect more. On a fundamental level, they will need to be guided by the notion that the office needs to be an enticing place where employees want to be.

Google’s financial muscle means its interpretation of that takes shape in the form of a three-lane swimming pool, massage rooms and exercise studios.

And while that is far beyond the reach of the average business or start-up, it speaks to the core principles that every employer must now consider in their hunt for appropriate offices: how space is used, the role of amenities and in-office perks, with wellbeing the golden thread that weaves it all together.

A demonstrable application of these attractive elements, alongside a strong emphasis on environmental factors, will put any employer in good stead with their workforce. It will ultimately create a culture that stimulates, and that’s what will bring workers back to the office.