Editor: In the face of increasing pressure to build housing, many towns and cities are considering demolishing historic buildings. There is a scarcity of ‘obvious’ construction sites left, so many are now looking to brownfield or even green-belt sites. 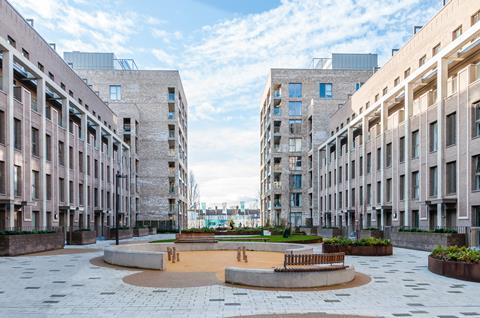 While the argument for protecting the countryside is persuasive, 18% of these sites are described as neglected derelict buildings and should ultimately be classified as brownfield. According to Unlatch, the number of brownfield sites available in London could provide space for around 355,000 new homes.

However, if we look closer, we can see that there are many hidden pockets of land – the forgotten historic buildings – just waiting for revitalisation.

Retaining original architecture plays an important role in helping provide the homes and community facilities an area needs, while still paying homage to what was there before. Our Upton Gardens scheme in Newham, east London, is an example of how a heritage asset – the old West Ham FC ground – has been successfully revitalised by placing tower gatehouses in the same position as the yellow turrets of the original football stadium entrance.

But the restoration of such an asset does not have to be an extensive project to achieve maximum impact. At our Hayes Village and Eastman Village developments in west London, we have gone back to basics and focused on the superficial aspects of heritage. Each site was a former factory. At Hayes, we have replicated the art deco, Crittall-style window frames, restored the 19th-century decorative gates and railings and retained the original colonnade outside the building, which will house a new community centre.

At Eastman, we have restored the iconic Kodak factory chimney, and used traditional red industrial bricks, similar to the old factory, for the new buildings. We have also added subtle graphics in the signage and balcony screens linking with the site’s heritage.

Breathing new life into heritage assets can be a time-consuming and complex process, but adapting old, forgotten, energy-inefficient buildings into new homes is a far better proposition than losing heritage assets all together.