Creating a third runway at Heathrow is a terrible idea. 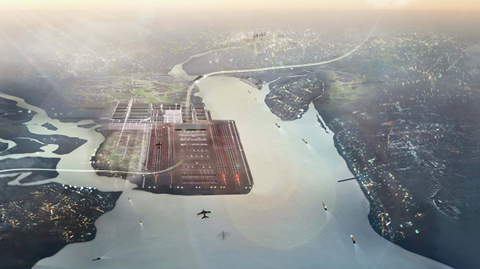 We should develop the world’s largest airport, operating 24/7, and site it where Lord Foster proposed, on the Isle of Grain and reclaimed land in the Thames Estuary. The so-called Thames Hub Airport would also offer new road and rail links to central London within 30 minutes travel time.

The £50bn cost could be more than off-set by closing and developing the 4.74 square miles of Heathrow, as a high rise city, housing some 300,000 people and creating 200,000 jobs in a new commercial centre for London.

The blight of noise and pollution would be much reduced for the lives of 1m-plus west Londoners, improving their health, increasing the value of some 400,000 homes by 20%, and potentially eliminating the possibility of crash risk from planes overflying central London.

If Hong Kong and Tokyo can successfully relocate their airports to coastal locations with over water flight paths, London can do the same.

The idea is so obviously beneficial in so many ways that the government should commit and support the Foster scheme without further delay.