Most investors believe that prime real estate is now overpriced across Europe and are increasingly turning to secondary cities and assets, 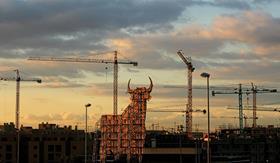 According to the Urban Land Institute and PWC’s Emerging Trends in European Real Estate report, nearly two thirds of the 500 people surveyed in the report said they felt core property was overpriced in almost all European markets and yet the vast majority also said they expected more equity and debt to flow into real estate this year.

The attractiveness of the income returns available in property compared with other sectors appears to be trumping concerns about pricing — especially for the growing body of sovereign wealth funds and Asian investors with investment horizons of more than 10 years.

Investors with shorter holding periods are being forced to chase riskier opportunities by the heat of the market.

As a result, investors are expecting some of the best returns this year to come from the cities hardest hit by the financial crisis. In contrast with 2014, when all the top-10 cities tipped as having the best prospects were in northern Europe, three southern European cities feature in this year’s ranking. Madrid has shot up 16 places to third in the ranking
and Athens has jumped 23 places to fifth.

The appetite for secondary locations is also evident in the UK. However, it remains to be seen how many investors are brave enough to pile into some of these riskier markets.

“It will be interesting to revisit the story a year from now to see, given the high level of uncertainty around the political and economic situation in locations like Athens, how many investors actually go to invest there,” says Simon Hardwick, a PwC Legal real estate partner.

Some fear that the market has already got ahead of itself, and that the lack of rental growth in some recovering markets could spell trouble. In Spain, pricing has recovered sharply over the past 18 months without any significant turn-around in occupier demand or rents.

“There is a big disconnect between rental growth and where capital values have gone. It is getting a bit toppy and could end in tears,” said one investor.

There is also a disconnect between the sectors that investors think offer the best returns and those that they plan to invest in. This year, six of the sectors judged to present the best opportunities were ‘alternatives’, including five related to residential.

However, when asked if they planned to invest in alternative investment sectors this year, 72% said they wouldn’t, with the majority citing lack of expertise as the reason.

Given how far yields have fallen across Europe and how much money is still flooding into the market, it could well pay for investors to learn new skills.

European cities with best prospects in 2015