Even after a sharp jump in its share price, Savills still trades at a big discount to US rivals CBRE and Jones Lang Lasalle (JLL), which analysts think is undeserved and could even make it an acquisition target. 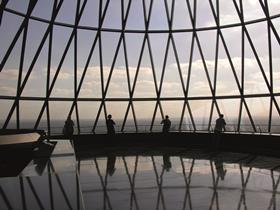 Savills shares leapt by 7.3% to 699.5p last Thursday (15 January) after the company revealed its full-year results would be “well ahead” of previous forecasts. The share price continued to rise this week, up to 730p on Wednesday - a 12% jump on its level a week earlier.

But the company’s shares are coming off a low base and have not kept pace with CBRE and JLL over the past year. Amid booming real estate markets on both sides of the Atlantic, Savills shares ended 2014 more or less at the same level that they started the year, while CBRE shares leapt by 29.6% and JLL more than 46.6%.

Listed UK commercial agents have traditionally traded at a discount to their US peers. This is partly because there is more equity chasing shares in the sector in the US and partly because UK-listed players have historically generated a higher portion of their revenues from transactions rather than contractual business, which makes them appear riskier in the eyes of investors.

It remains true that Savills is more geared towards deal-related business than its bigger US rivals but it is diversifying. More than half of its revenues now come from non-transactional sources, and following its acquisition of Studley last year it now has a sizable presence in the US, Europe and Asia.

Last year’s £154m Studley acquisition increased, overnight, the percentage of Savills’ revenues coming from the US from less than 1% to more than 15%. Analysts expect the acquisition to prove a big success, helping to diversify Savills geographically, and with Studley’s focus on tenant representation, helping to diversify it by sector as well. The deal has also already proved useful for Savills’ UK capital markets team, providing a network to draw on in North America when they were marketing the Gherkin (pictured) for sale.

In a note initiating coverage of the company last autumn, Barclays said: “Savills’ diversification presents significant defensive qualities. Buoyed by the acquisition of Studley in the US - game-changing, in our view - Savills has added a new and interesting strand to its growth story.” 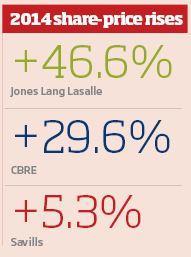 One of the factors that weighed on the company in 2014 was its exposure to high-end UK residential. News about UK stamp duty or mansion tax made no impression on CBRE or JLL shares, but had a big effect on Savills.

Analysts believe some of the negative headlines about London house prices and the impact of stamp duty and mansion tax on the luxury end of the market resulted in a disproportionate impact on the shares.

“There is a perception issue among investors,” says Chris Millington, an analyst at Savills’ house brokers, Numis. “People believe that the majority of Savills’ business is reliant on residential, but in fact it is about 13% of revenue and 18% of profit.”

After Savills’ trading update, Numis issued a share price target of 837p - although other analysts are not quite so bullish, all have targets above 780p, which is still well up on the 730p price this week.

Despite analysts’ positive stance on the stock, Savills still trades at a significant discount to JLL and CBRE, which one insider said could make it an acquisition target. “It could well be a target for one of the big US firms. There would be an immediate arbitrage.”

But with Savills shares on the rise, any potential buyer may have to move quickly. Once the election result is known, the shares could rocket and the window of opportunity would close.