Bellway has made no mention of the fire that engulfed the Barking Reach development in east London last weekend in its latest trading update to the market. 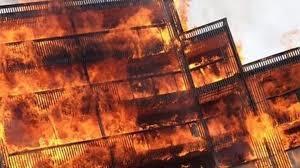 Instead, the group focused solely on its trading performance, reporting a 4.7% increase in its weekly reservation rate, and a 2.7% rise in its forward order book.

Residents at the block of flats have said concerns were raised with Bellway and the council about potential fire hazards. Twenty flats with wooden balconies were destroyed and another 10 damaged in the fire on Sunday. One man and one woman were treated at the scene after suffering from smoke inhalation. No other injuries were reported.

Bellway built the flats on the Barking Riverside scheme in 2012, and subsequently sold the freehold of the property to Adriatic Land 4, which is part of the £1.6bn Long Harbour Ground Rent Fund.

Residents have also claimed there were no sprinklers or working fire alarms and that passers-by raised the alarm by honking car horns.

However, Jason Honeyman, chief executive of Bellway, did not address these concerns in the trading update, choosing to focus on what he called “another successful trading period for the group”

Honeyman added: “Customer satisfaction remains high and this has helped secure our position as a five-star home builder for another year. Going forward, we are on track to deliver further earnings growth this financial year and beyond that, our strong balance sheet ensures that Bellway is in a good position to continue its long term growth strategy.”

The Barking Reach residents’ association wrote to Bellway in early May to ask for the fire risk at the flats to be investigated after the BBC Watchdog programme broadcast claims of fire safety problems at two other developments by the same builder.

In a statement about the fire on Monday, Bellway said: “Bellway continues to take the issue of fire safety extremely seriously and will work with all involved to ensure that affected residents are properly supported during this difficult time.”

London Mayor Sadiq Khan said the fire could “easily have resulted in fatalities”.

He said: “This incident highlights both City Hall’s total lack of powers over private building owners and the slow response from the Government and developers to the fire at Grenfell.”

He added: “We will be pushing for vital changes to be made and the safety of residents ensured.”