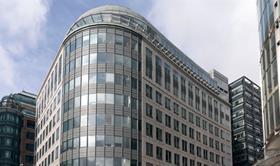 The building is now fully occupied and this letting brings the office element of the 30-acre Broadgate campus to full occupancy.

WeWork is locating its third London office at Broadgate and has signed a 15-year lease. The company will occupy the bottom four office floors along with the ninth floor of the building, with a standalone entrance at ground level.

WeWork’s members run the gamut from entrepreneurs, freelancers, and startups to artists, small businesses and even divisions of large corporations. The company will join an already diverse mix of businesses at 199 Bishopsgate, including JX Nippon Exploration and Production, SAS Software, global asset management business Allianz Global Investors and US law firm Dorsey & Whitney.

Matt Pinsent, head of city asset management at British Land, said: “WeWork adds to an already diverse mix of occupiers at 199 Bishopsgate. This diversity reflects not just the quality of the building but also its location, close to the growing Shoreditch market, the City and to Liverpool Street Station. We expect the wider Broadgate campus to benefit from the opening of Crossrail in 2018, and are investing across the estate to enhance its appeal to a broad range of sectors. We look forward to welcoming WeWork to the building later this year.”