Sir George Iacobescu, chairman and chief executive of Canary Wharf Group (CWG), is set to receive £3.5m from the sale of his Songbird Estates shares, following the £2.6bn Qatari-led takeover of the group yesterday. 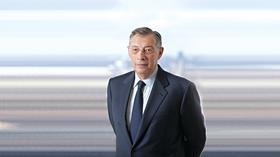 Iacobescu will be the biggest earner from a CWG staff windfall of almost £60m to be shared among its 100 employees. In 2013, He was awarded more yet-to-be released shares that would be worth a further £2.3m, taking his potential total windfall to almost £6m. Another big earner is understood to be Peter Anderson, CWG’s managing director of finance, who will bag more than £1m.

The group’s annual report shows three tranches of Songbird shares have been awarded to directors and senior employees in recent years, worth £23m at the offer price of 350p. The remaining £37m will be distributed among the remaning staff.

Iacobescu, a Romanian who fled the Ceausescu regime 40 years ago and was knighted in 2011 for his role in turning the East London estate into one of the most successful commercial districts in the world, is sitting on around 1m Songbird shares. He first joined the group in 1988 during the Paul Reichmann era, when, as Olympia & York, it was fighting to retain control of his the multi-billion pound plan to transform a remote part of east London into a world class business hub.

He stayed with the project when Olympia & York went into administration in 1991 working as construction director and then becoming deputy chief executive of the CWG when it was formed in 1995, and chief executive in March 1997. During his time at Canary Wharf, Iacobescu has participated in the development and construction of more than 30 buildings.

Anderson is another long time employee. He also joined Reichmann era in 1992. He is responsible for the group’s capital raising activities, accounting, strategic planning and analysis, taxation and information technology. He is also non-executive director of Transport for London and chairman of Transport for London’s finance and policy committee.

A spokesman for Canary Wharf confirmed to Property Week that should the Qatari Investment Authority and Brookfield Property Partners, who won their £2.6bn takeover battle Songbird yesterday, now increase their backing from 85.6% to 90% of shares the company will be delisted and Iacobescu will sell his shares at the 350p bid level.

As Property Week revealed yesterday, Iacobescu, who turns 70 in November, has been asked by the winning bidders to remain in his position at CWG.

Yesterday’s news that Songbird’s major shareholders China Investment Corporation, Simon Glick and Morgan Stanley had all backed the bid shocked the market after Songbird, which owns almost 70% of CWG, had recommended investors reject the bid earlier this month.

The bidders are set to be granted a 14-day extension to their bid deadline by the Takeover Panel this afternoon to secure the remaining 4.4% of shares required to reach the 90% level. It will then delist the company and form a new private group. Gaining the extra shares is considered to be a formality now the Songbird board has backed the bid, albeit reluctantly following a bitter war of words over the past three months.