LandSecs valued at more than £10bn in post-recession high

Land Securities’ market valuation this week passed £10bn for the first time since early 2007 after it reported a substantial improvement in retail sales. 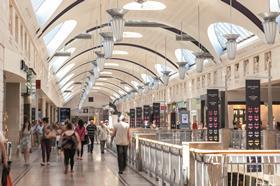 Shares in the UK’s biggest REIT rose 1.4% to £12.70p in early trading on Wednesday , taking its market value to £10.3bn. Spurred by falling gilt yields and an 11.5% jump in NAV in its half-year results to November, the shares have risen 25% in little more than three months.

It is the first time Land Securities’ market cap has passed £10bn since the start of 2007, when it peaked at £11bn shortly after the UK REIT regime was introduced. The shares then underwent a precipitous decline and the value of the company fell to a low of little more than £2bn at the end of 2008.

The rise in the share price this week came after Land Securities revealed in its Q3 2014 interim management statement that like-for-like sales from its retail portfolio grew 3.8% in the three months to the end of December, which was substantially ahead of the 0.8% growth achieved in the same period in 2014.

The strong performance follows last year’s transformation of Land Securities’ shopping centre portfolio, which saw it sell several secondary centres and acquire a 30% stake in Bluewater shopping centre (pictured) for £656m, at a landmark yield of 4.1%.

“While perhaps a slightly ambitious stretch, this could be seen as validation of the asset selection in the retail portfolio,” said JP Morgan analyst Tim Leckie.

Land Securities chief executive Rob Noel was also upbeat about the company’s developments, which he said were coming to market just as rents were rising due to a shortage of space. “Interest in our developments is strong and on terms ahead of our valuers’ most recent estimates,” he said.

Land Securities has attracted criticism for not developing more after stating in its annual results last May that any additional development commitments would require prelets.

Jefferies analyst Mike Prew said this week that Noel must be wishing the REIT had more than its current 1.4m sq ft development pipeline. “Land Securities has been too cautious too early and should have more development and leveraging,” he said.