M&A activity has returned to the listed property sector with announcements on successive days of the proposed takeovers of Market Tech and Kennedy Wilson Europe (KWE). 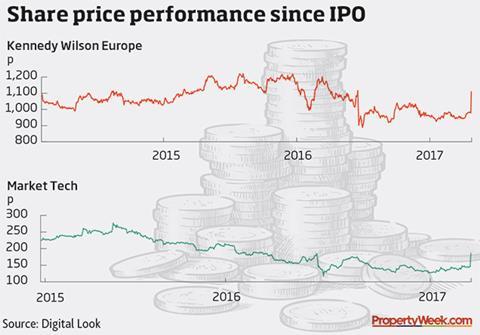 After markets closed last Friday, Market Tech revealed that the Camden landlord was to be taken private by Teddy Sagi’s LabTech, which already owns 71% of the company. And on Monday, KWE announced that it had agreed to a takeover offer from its US-based parent, Kennedy Wilson, whose current stake totals about 24%.

They look set to be the first major acquisitions in the listed property sector since the sale of Canary Wharf Group owner Songbird to Brookfield and Qatar Investment Authority two years ago.

Both Market Tech and KWE floated in 2014 and have been trading at significant and persistent discounts to net asset value (NAV) over the past year.

Market Tech was trading at a double-digit discount before Friday’s announcement and LabTech’s offer price of 188p a share is below the float price of 200p, even though it represents a nearly 30% premium to the latest share price. Explaining the deal with LabTech, the company said the weak share price had “made accessing capital more expensive for the company and restricted Market Tech’s ability to expand”.

In the case of KWE, it was trading at a discount of around 20% to the latest NAV ahead of the merger announcement. The offer of 0.67 Kennedy Wilson shares for each KWE share values the European company at about £1.5bn and represents a 20% premium to the latest share price.

Analysts at Merrion Capital predicted in March that KWE was a likely takeover target, comparing the company to a double-A corporate bond yielding 5.2% and trading 25% below bar. “We estimate a 65% probability of a bid for KWE over the next 12 months,” it said at the time. “Kennedy Wilson has been buying up shares in KWE recently, which suggests to us they feel the company is undervalued. We believe KWE could be eventually taken over by its American-listed parent.”

A lot of mid-size UK REITs are trading at discounts and could be attractive to sovereign wealth funds - Colin Lauder, Goodbody

Goodbody analyst Colm Lauder added that KWE was a “really strong asset management business” but that the share price had suffered since the EU referendum because of investor nervousness about the company’s exposure to secondary UK property.

He predicted that other UK-listed property companies could be takeover targets. “A lot of mid-size UK REITs are trading at discounts and could be attractive to sovereign wealth funds or other well-funded buyers, especially given the weakness of sterling,” he said.

However, Green Street Advisors analyst Hemant Kotak said that, although many REITs trading at persistent discounts were “vulnerable to takeover interest”, potential bidders may have to pay significantly more to gain control of companies than their discounts would indicate.

“Another point to bear in mind is large headline NAV discounts may appear more tempting than they really are given the magnifying impact from leverage and mark-to-mark debt liabilities,” he added.