The latest data on commercial property investment paints a decidedly mixed picture of the health of the market. 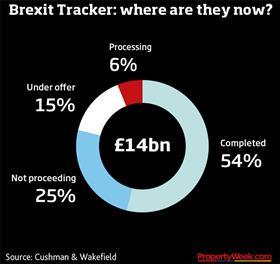 On one hand, the latest valuation data points to a recovery in capital values with analysts at Peel Hunt upgrading many of their net asset value forecasts for UK property stocks this week, citing “resilient property prices”. On the other, deal volumes continue to be sluggish with research from Cushman & Wakefield (C&W) revealing that more deals than normal have fallen through since the EU referendum and that those that have concluded have taken longer.

In a note to investors, Peel Hunt was upbeat about values. “Physical real estate prices have held up stronger than many expected, with IPD showing an overall valuation decline of 3% since June, and even in London valuations are only down by around 4% so far,” it said. “Encouragingly, IPD has also now posted valuation rises in each of the last three months.”

The recovery in values looks to have continued into 2017 with the CBRE Monthly Index last week reporting capital growth of 0.3% in January.

C&W’s Brexit Tracker, which has followed the progress of more than 300 commercial properties worth over £14bn that were on the market at the time of the EU referendum, also shows only modest movement in pricing. The weighted average discount-to-offer price on the assets that have since been sold is just 3%. 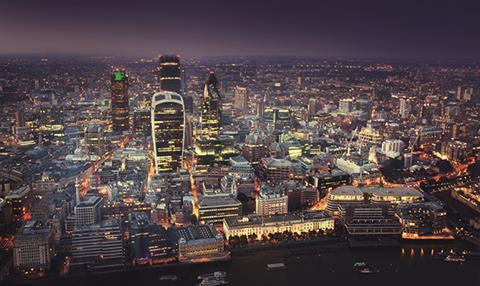 “At the outset, people pointed to a more Armageddon scenario but we haven’t really seen that manifest itself,” says Nigel Almond, head of EMEA capital markets research at C&W.

People pointed to a more Armageddon scenario but we haven’t seen that manifest itself - Nigel Almond, C&W

However, the research also reveals significant changes in the market’s liquidity. As of mid-January, 54% of the £14bn worth of deals tracked had been sold. Of the rest, 21% were either under offer or still progressing, leaving 25% that had fallen through, far higher than the 10% C&W estimates would have failed to progress in normal market conditions.

Transactions have also taken longer. Typically, deals take three months to go under offer, but in the wake of the Brexit vote, they have taken up to five or six months.

Larger lots in particular have suffered delays as investors have taken more time and stepped up their due diligence before signing off major investments.

The C&W findings also underline how important overseas money has become in the London property market. Nearly three quarters of buyers in the capital in the second half of 2016 were foreign. By contrast, only 40% of buyers in the regions were from overseas.

In London, an influx of Asian capital, from public and private companies in Hong Kong as well as some private companies in mainland China, has helped offset reduced demand from other regions. However, some commentators warn that the market is becoming too reliant on a limited set of buyers. For instance, bearish Jefferies analyst Mike Prew describes the dominance of Asian buyers since the Brexit vote as “worryingly narrow”.