Shaftesbury has updated investors with numbers including the crucial Chrismas period. 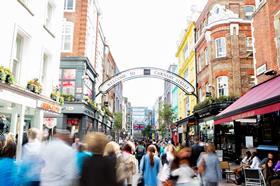 Over the Christmas and New Year trading period visitor numbers across its West End villages, including shopping mecca Carnaby Street, were strong, it said.

Shaftesbury said it is pushing plans for two major acquisitions made in 2014, Charing Cross Road/Newport Court/Newport Place in Chinatown, and 57-59 Broadwick Street in Carnaby.

“Subject to receiving the necessary consents,” it says, “we currently expect to commence on-site in 2016. We currently estimate a total cost of £22m across both schemes.”

However, it also said it was finding it hard to persuade more property owners in Chinatown and Soho to sell, as it seeks to increase its dominance in the two London tourist hotspots.

Shaftesbury’s shares were slightly down in early trading falling 0.25% to 810p.