A new facility to enable testing of a revolutionary air-breathing rocket engine is under construction at Westcott Venture Park, formerly a secretive military base, as Rockspring continues to develop the Buckinghamshire site. 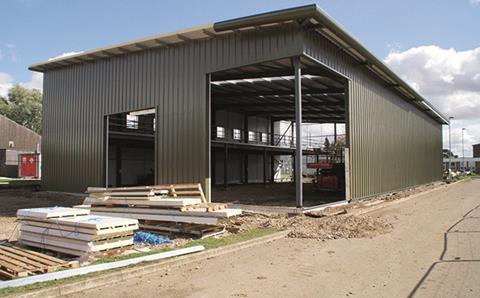 It is thought to be the first new propulsion facility built in the UK for more than half a century - a nod to the park’s history as a Second World War and Cold War base.

Westcott is owned by the 50-year-old Rockspring Hanover Property Unit Trust, which bought it in 1999. Rockspring is developing six acres of the 650-acre site, which lies between Bicester and Aylesbury, for a new test site and assembly building for UK company Reaction Engines.

Tests for the Synergetic Air-Breathing Rocket Engine (SABRE) will begin in 2020.

Westcott provides us with an excellent venue for our test facility at the centre of an emerging space technology cluster - Mark Thomas, Reaction Engines

“Westcott provides us with an excellent venue for our test facility, close to our headquarters and at the centre of an emerging space technology cluster,” says Mark Thomas, managing director of Reaction Engines.

The former RAF Westcott has a strong history of rocket propulsion research. It has been used since 1946 for projects including Blue Streak and Black Arrow.

Although attention tends to be drawn to the park’s technology clientele, what sets Westcott apart is its diversified tenant mix, says Rod Mordey, associate partner at Rockspring.

“Westcott Venture Park is a highly resilient, diversified asset with significant opportunities for further income and capital growth,” Mordey says. “The emphasis of activity at the moment surrounds three pre-let development projects across the storage, light industrial and hi-tech sectors, together with a modest speculative development of small light industrial units.”

Green Retreats is taking an additional 10,000 sq ft building adjacent to its existing facility at Hangar 4 and a four-acre site is to be developed into a storage facility for Mobile Mini, which hires portable site accommodation and storage containers.

Following the success of the last speculative development - a 24,000 sq ft warehouse that completed in 2015 and was fully let the following year - work on Century Court Two, a 21,000 sq ft five-unit industrial scheme, begins next week. However, propulsion research and development is still the park’s unique selling point.

A further 10 ha of land is ready to develop, and more than 20 ha is available altogether. “For the past 70 years the park has been the home of UK rocketeers, and recent lettings to Reaction Engines and Nammo will ensure it remains at the forefront of this activity,” Mordey says. “The excitement for us is to benefit from the park’s niche position in this market, which is currently receiving a big funding boost from central government.”

Westcott has rocketed to the forefront of the UK’s propulsion technology sector and with plenty of land still to develop, Rockspring hopes to keep it that way.