Exclusive research for Property Week shows how property prices have risen significantly along the Crossrail route. We report on the hotspots.

To date there has been plenty of hype about the ‘Crossrail effect,’ but little evidence that the new £16bn rail network has had a tangible impact on property prices - not least because prices have been rising across London anyhow over the past few years.

However, exclusive new research undertaken for Property Week by location intelligence consultancy Groundsure has revealed house prices have soared by up to 73% along the Crossrail route between 2013 and 2015, with the rate of house price growth in areas within walking distance of the new stations outstripping the London average by as much as 56 percentage points.

Using Land Registry price-paid data, the consultancy also established that three residential areas outside central London have yet to fully enjoy the benefits of the ‘Crossrail effect’ on house prices: Harold Wood, where prices only rose by 1%, Chadwell Heath (6%), and Ilford (7%) - the average growth for London house prices since 2013 is 17%.

“The ‘Crossrail effect’ has been widely debated in the press of late, but the general consensus has been that it will have a profoundly positive effect on property prices across the capital,” says Groundsure managing director Dan Montagnani. “This data goes to show that the experience for homeowners isn’t consistent across the city as proven in the difference between prices in areas like Taplow and Harold Wood.

“There is no doubt, however, that Crossrail is essential to supporting growth in London, which will, in turn, boost the rest of the economy.

“With the recent announcement of the proposed route of Crossrail 2 homeowners in areas close by may well have reason for excitement.” 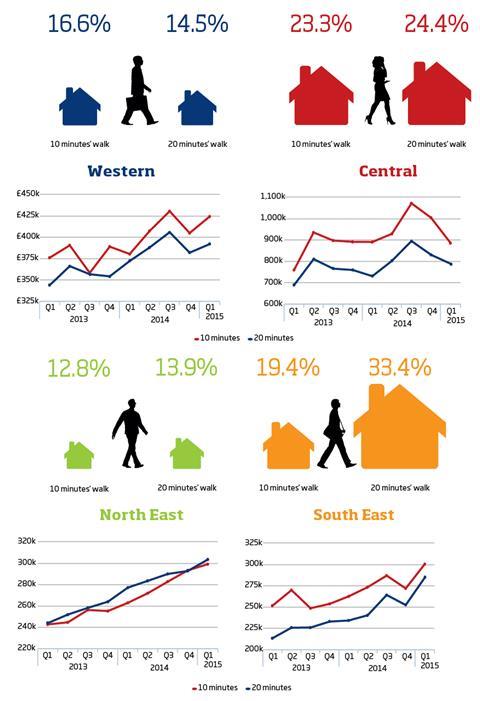 Increase in Taplow - the area that has seen the greatest growth.