5
An American Invasion in the UK logistics market
Insight

An American Invasion in the UK logistics market

What the Americans lack in being first when it comes to the UK logistics market, they certainly make up for in being bullish. Back in 2019, when some were quietly worried about a bubble forming in the shed market, US-backed developers poured into the sector in a big way. 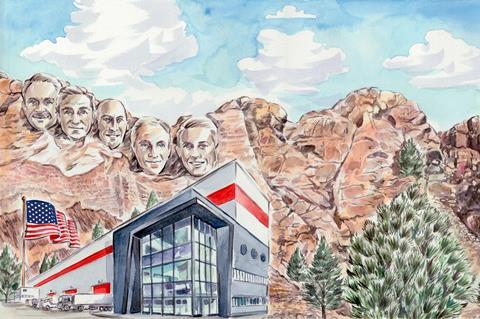 First came Firethorn, a vehicle founded by former Tristan Capital directors Peter Mather and Chris Webb and backed by capital from the American Stephens and Van Tuyl family offices. The firm made its debut industrial purchase in 2019.

Next came Bridge Industrial, a large US industrial developer. It announced the opening of its UK office in 2020 and made its debut UK industrial buy in May 2021, as revealed by Property Week at the time.

Then came Trammell Crow Company (TCC), another large US industrial developer. Opening its UK office in 2021, it made its UK industrial debut in August that year.

Despite being quite late to the UK logistics party, these three US-backed developers are now making a name for themselves in a UK market already crowded by giants like SEGRO, Prologis, Panattoni and Logicor. Property Week  sat down with Firethorn, Bridge and TCC to find out how the past couple of years have been for them and where they think their businesses – and the wider market – are headed.

TCC, the last of the three to enter the UK industrial and logistics market, has made up for lost time by already completing a few deals. “We’ve put a stake in the ground and we’re going to park our tanks on your lawn,” says TCC’s UK head Mike Forster. “We’re going to drive this business. It’s no longer new. It’s here and we want to be one of the biggest logistics developers in Europe.”

Forster is speaking to Property Week at the newly refurbished CBRE London HQ, Henrietta House. TCC is backed by CBRE, so the company certainly has the clout to become a European powerhouse.

Forster is flanked by Ian Worboys, head of TCC’s European operations. A self-confessed “shed head”, Worboys is a veteran of the industry who was brought out of an extended period of “gardening leave” – following the £2bn sale of P3 Logistics Parks to Singaporean sovereign wealth fund GIC in one of the biggest real estate deals of 2016 – to spearhead TCC’s European growth. And that growth has been pretty stratospheric.

“We’ve gone from a key handful of people to around 30 people,” says Forster. Worboys adds that the next stage in the company’s European growth is getting its assets let. On that point, he too is upbeat, predicting that two of its UK assets will be “75% to 100%” let by the time they start construction on them – which will be this April for one asset and June for the other.

It sounds like an exciting time to be working for the company, but is it not a few years too late to be taking advantage of the UK industrial boom?

“We felt challenged by people saying it was too late,” says Forster, who says he is actually motivated by the assumption that the market has peaked. Worboys agrees and argues that having been involved in the sector for decades, he knows when the heat has come off a market and when it’s still warming up.

“There are a lot of people pretending to be industrial specialists at the moment: ‘Oh yeah, back in the ‘90s, I drove past a warehouse, so I’m a specialist’,” he says. “But the people who are really doing well are real shed heads. This is a people business, and your reputation goes a long way.”

Another company hoping its reputation will carry it a long way is Bridge Industrial. Aside from being one of the biggest names in sheds across the pond, its UK director Paul Hanley is the former Prologis vice-president. Bridge brought in ex-Logicor director Stephen Vickers as senior vice-president, as Property Week revealed in January 2021. The company quickly established a name for itself by snapping up last-mile logistics space in and around London.

Its fifth and most recent deal was its biggest to date. As revealed on PropertyWeek.com, it bought the 8.5-acre Weybridge Business Park on Addlestone Road for around £55m and plans to redevelop the site into around 190,000 sq ft of industrial space. The fact that the developer is open to office-to-industrial conversions showcases its belief in the last-mile logistics market, specifically in London.

The people who are really doing well are real shed heads. This is a people business and your reputation goes a long way

Hanley believes there is a lot of growth potential in the London market. “It still feels like we’re very, very early on,” he says. “We have seen in some locations land values almost double in 12 months.”

Asked if he thinks it is too late to be coming to the UK, Doloughty offers a similar response to TCC’s. “It’s human nature to think that yesterday would have always been a better time to invest, but where we are right now is compelling in terms of what runway still exists in the market.”

Space in the market

One company that knows the benefits of buying into the shed market ‘yesterday’ is Firethorn, which entered before TCC and Bridge. Yet its co-founder, Peter Mather, still sees space for new entrants.

“I wouldn’t say you can’t enter now,” he says. “It depends where you’re entering. Are you trying to be a developer or a buyer of built products? It always depends on the cost of people’s capital.

“The amazing thing about global capital is that one person’s good return is not good enough for somebody else. And so, some people are willing to pay a higher price than the next person.”

Having started earlier than Bridge and TCC, Firethorn is now well into the leasing phase of the business plan, having let 354,000 sq ft of space at its Northampton Cross scheme in August last year.

“Now you can see the proof in the pudding,” says Mather. “Once you’ve got stock to lease, you can really start to understand that side of the market rather than just saying ‘this is a good strategy and we’re going to make it work’.”

Once you get the breadth of international capital chasing the sector, someone is going to surprise you

As for where he thinks the market is headed, Mather says he’s been surprised by the variety of international investors who have poured money into the sector and the sheer number of records set for UK warehouse investment. Describing Firethorn very much as a “developer trader”, he says the company is considering its next move.

“We have decisions to make about where to go. Do we build a portfolio that we think will be worth more as a whole or sell the individual parts?”

Asked about whether he thinks yields could go much lower, Mather thinks that anything could happen considering the current heat in the market. “You would naturally think that riskier assets would carry more yield, but you’re seeing logistics assets trade at 3%. Can it go much further? It goes back to how much return people want from their capital. Once you get the breadth of international capital chasing the sector, someone is going to surprise you.”

Of course, it is not just sharpening yields that have surprised overseas entrants to the UK industrial market. One international shed expert says that the antiquity of the planning system and the regular ‘gazumping’ on deals are things they find odd about the UK market. Another admits they were taken aback by the way some large-name developers in the UK “just did every deal in the name of killing the market”.

With the potential rewards as big as they are, no amount of UK market oddities are going to slow this trio of US-backed industrial developers down. Having parked their tanks and raised their flags, the US invaders are here to stay.

Find out more about the Industrial & Logistics Conference & Showcase