A game-changing deal for Ireland?

2
Belfast is ready to bounce back
Insight

Belfast is ready to bounce back

This summer, a single building will have a major impact on not only Belfast’s office market, but also the future of its city centre. In July, PwC will move from its current home in Waterfront Plaza into the 230,000 sq ft Merchant Square, which straddles Wellington Place and Upper Queen Street. 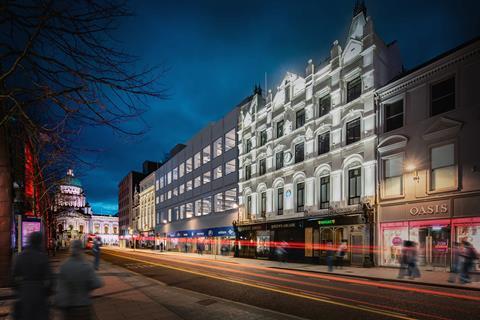 As large corporates weigh up the pros and cons of the office versus working from home, PwC’s commitment to Merchant Square sends a strong signal about its faith in the future of Belfast’s office sector. Its commitment to the scheme, which last month became the province’s biggest investment deal when it was sold by Oakland Holdings to a Middle Eastern investor for £87m, could also aid the regeneration of Belfast’s staid core.

So, just how big a role could the accounting giant’s commitment to Belfast play as we slowly emerge from lockdown?

Commentators say it is too early to know whether Brexit will also have an impact on the market, but Belfast is expected to emerge from the pandemic stronger and raring to go.

Merchant Square is a good location with leisure and public transport

“No sooner had we signed our deal on Merchant Square than every lease and restaurant was taken up in the surrounding area,” says Kevin MacAllister, regional market leader for Northern Ireland at PwC. “We will not single-handedly regenerate Belfast city centre, but we are going a fair way to kickstarting it.”

Progress would be swifter if there was not a shortage of office space, but the many statement buildings now under way or with planning consent should remedy this (see panel, overleaf).

Several huge projects are also set to alter the face of Belfast in the coming decades. There is Weavers Cross, a new £1bn regional transport hub; The Sixth, which is set to open in the old Belfast Telegraph Building; the Destination Hub – a new £100m tourist attraction and cultural hub that the council is currently looking for a site for; and Smithfield Yard, just off the main retail thoroughfare.

All these are making developers salivate and, following the Merchant Square sale, investors are now watching the city closely.

“A commitment of this scale [in buying Merchant Square] from an international investor new to the jurisdiction shows the exciting and unique place our market finds itself in,” says Ben Turtle, director of investment at Savills. “We are aware of other assets being prepared for market that will further test the depth of interest in Northern Ireland.”

Brian Lavery, managing director Belfast at CBRE, describes the Merchant Square deal as “a shot in the arm for not only the city’s market but for PwC, making it clear they are going back into the office to be an office tenant”.

There is a certain irony in PwC taking Merchant Square given it originally occupied the building two decades ago when it was known as Ferguson & Rushton. However, according to MacAllister, PwC’s move was not “because those of us who had worked there before [were] feeling in any way sentimental”.

He says the building is well-located in the city centre and has a thriving leisure scene and good public transport links, so signing on the dotted line was a no-brainer.

“When Covid struck, it seemed the world of professional services occupying big office development was gone, that we were going to move into virtual working forever,” says MacAllister. “But we were never convinced that was the case. We are talking about future-proofing our business – developing a place where people want to be, rather than have to be.”

Merchant Square is just a few hundred yards away from the proposed Weavers Cross transport-led regeneration scheme. The eight-hectare site, in the heart of the city, will be home to a modern, high-capacity transport hub and mixed-use developments, including large swathes of offices. Set to be developed on the site of the existing Europa bus centre and Great Victoria Street railway station, the £1bn scheme promises to create 50,000 new jobs.

MacAllister says the development is seen as a huge catalyst for Belfast’s regeneration. “[Weavers Cross] is certainly influencing our decision to move in that direction because that will bring the whole life into the city centre.”

Another development that will have a significant impact on the local property market is The Sixth. In February 2019, the £80m joint venture between Belfast City Council and McAleer & Rushe got the go-ahead. The 300,000 sq ft mixed-use scheme at the old Belfast Telegraph site on Royal Avenue will have 230,000 sq ft of workspace, and potential for a global HQ with floorplates of up to 30,000 sq ft.

The Sixth will be next to Ulster University’s new £250m Belfast campus. The 750,000 sq ft site will house up to 15,000 students and staff – the equivalent of a population the size of Armagh being dropped into one end of the city. “The biggest change in Belfast is going to be the Ulster University campus,” says Patrick O’Gorman, principal at Bywater Properties, which along with partner Ashmour is bringing its own changes to the city.

Together they are refurbishing a 30,000 sq ft building, 35DP, which is five floors above the Boots shop on Donegall Place and set to be completed in early July.

“It’s a slightly untested environment for office space because traditionally the upper floors in Belfast have been left fallow above retail,” says Gareth Howell, director at Savills, the scheme’s leasing agent. 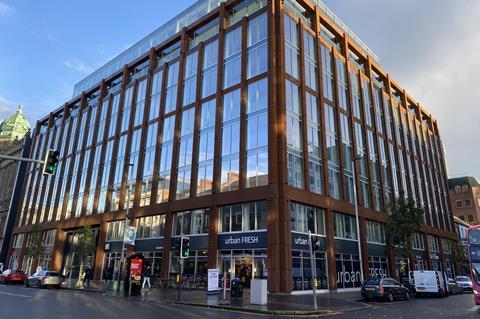 Potential occupiers have clearly not been put off by the location, as the building is close to being under offer on half the space.

The Bywater/Ashmour partnership is also bringing on Smithfield Yard, a 167,000 sq ft mixed-use scheme with 152,000 sq ft of offices, which is currently populated by a hub of independent retailers. The scheme has planning permission and is viewed as a long-term prospect when market conditions allow.

“It is one of the things that attracted us to working in Belfast,” says Theo Michell, principal at Bywater. “You don’t get many major city centres in the UK where you get vacant sites that have sat for a long time with not much happening. But it’s right off Royal Avenue, slap bang in the city centre.”

At all the new schemes and developments being brought forward in Belfast city centre, the spotlight is very much on wellbeing and ESG.

“The wellness agenda was ramping up pre-pandemic, [but Covid has] sped up that process,” says David Wright, director at CBRE Belfast. “There’s going to be a flight to quality in the short term. We have a lot of secondary-type buildings in Belfast that aren’t fit for purpose.”

Merchant Square has an entire floor dedicated to wellbeing, hosting pilates and yoga classes along with social activities. And next door is a building leading the charge on wellbeing.

The Lotus Group is developing The Well, a 36,000 sq ft office building on Wellington Street that has a strong focus on wellness and will be delivered in 2022. Already dubbed ‘the healthiest building in Belfast’, its website boasts it will be ‘an office utopia where the air is clean, the lights are controlled and the journey from door to desk is 100% touch-free’.

Alastair Coulson, managing director of The Lotus Group, says he has no worries about leasing activity post-pandemic. “We bought a building in a really prime location next to the city centre, and the new transport hub [Weavers Cross] is going to be opposite PwC’s new building so location is A1. We were always confident we were in the right location.”

Despite the challenges the industry has faced over the last 12 months, Coulson is optimistic about the future. “There are a lot of great developers doing great things in the city. That all [aids] Belfast plc, as a rising tide helps all ships.”

A game-changing deal for Ireland?