Can beds really mix with sheds? 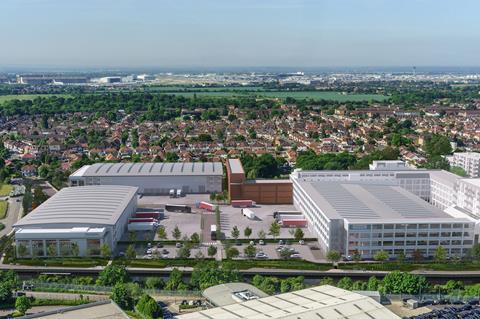 SEGRO Park Hayes: the developer incorporated housing and industrial in a side-by-side arrangement

That equates to an awful lot of big boxes, but perhaps it doesn’t need to. Such statistics, plus the fact that warehouse space required per new home is likely to increase with the ongoing rise in ecommerce, have got people thinking: is it time to incorporate logistics capability into residential design? Can it be done well? And what needs to change to facilitate such development?

One organisation that has put in the research on the potential for the co-location of warehousing and residential is KKS Savills,

the agent’s design and architecture studio. “As more and more homes are built, what that actually means is more and more deliveries are going to have to be made,” says Katrina Kostic Samen, head of workplace, strategy and design at KKS Savills.

“All we’re seeing at the moment is white vans driving around our streets and snarling up traffic. The question, essentially, is: how do you create a place that works both for residential and industrial from a design perspective?”

At first glance, the idea of a steel shed sitting alongside people’s homes is incongruous, certainly from an aesthetic point of view. However, Oana Nastase, architect and technical designer, workplace, at KKS Savills, points out that most residential areas already incorporate other uses – indeed, the ones that don’t tend to be rather forlorn.

“We just need to take a look at how we can connect the different functions within an area,” she says. “You hardly ever find just housing without any additional functions, whether that’s an office, retail or education component. You have services. But you also need that logistics component to tie everything together.”

Moreover, Samen says the industry needs to forget the image of a hulking warehouse. The sort of space she and her colleagues are talking about would be used purely to service the local community – the last, last mile, as it were – and would therefore be small enough that design would not need to be an issue. She makes the comparison with the so-called ‘dark stores’ used by grocers to fulfil online orders.

“With dark stores, they are just looking for 10,000 sq ft units,” she says. “They’re small. You could repurpose a high street store. You could have it in the middle of new housing and call it the clubhouse and have a café attached. You could have it anywhere you want it to be, really.”

How do you create a place that works both for residential and industrial from a design perspective?

Quite apart from the aesthetics, the other issue that people have raised in the past when the co-location of warehousing and residential has been suggested is access. After all, logistics operators tend to need 24-hour access – goods may not be delivered through the night, but they are certainly moved around at all times of the day.

Again, the scale of what KKS Savills is talking about is important on this point. Yes, some sort of van would probably be needed to make deliveries to a community-scale warehouse space, but that could be done during the day, and onwards deliveries, whether to somebody’s door or secure locker, could be made by e-scooter. That deals with the noise issue and also ticks the sustainability box. “It could be an electric scooter, drone or some other sustainable method,” says Samen.

“Logistics as a sector needs to transform. It’s been very much around the macro – getting it from transportation hubs, whether it’s the waterways, the seas, the ships, the boats, the ports, and on to the lorries to get to the warehouses. Now, we need to really transform it into the micro.”

That’s the theory, but is anyone actually doing the sort of scheme that KKS Savills is talking about? The answer is ‘sort of’, but it should also be said that companies are looking at it very seriously. “We’ve looked at various schemes across London that look to co-locate employment space and residential on the same site,” says Alan Holland, director, greater London, at SEGRO.

“We’ve done kind of a side-by-side arrangement at Hayes and more latterly we announced a JV with St George, the residential developer. That’s a multi-level industrial building that is on a smaller scale as opposed to large-format logistics, and it’s part of a larger residential scheme. We haven’t at the moment broken through to the next step, which is to physically integrate light industrial with residential.”

However, full integration is something that SEGRO is considering in depth. “It is something that I know we and the market are looking at increasingly, particularly in areas undergoing a large level of residential intensification,” says Holland. “Clearly, from a design and masterplanning point of view, it’s got a few more challenges than just doing the side-by-side arrangement.”

Those challenges include design, access and sustainability. According to Holland, it is vitally important that a logistics or warehousing element is considered from the outset of a project: if it is just an add-on, it will fail. “When you look at the large-scale housing schemes in and around London, it always tends to be thought about right at the end,” he says.

However good the design and however early a warehousing element is considered, planning is still an issue. If logistics developers are just starting to get their head around the co-location of warehousing and housing, the same is true of planning authorities. That said, it would appear that the situation is starting to change – in Greater London at least.

The latest iteration of the London Plan certainly places a greater emphasis on the importance of logistics space to a large and growing metropolis. City Hall, it appears, has realised that the rise of online retail still demands physical space and that local distribution is vital if the capital’s roads aren’t to be ever more clogged up by pollution-spewing HGVs, perhaps in recognition of the fact that the regulatory path towards green lorries is far longer than the one for cars.

“The latest version of the London Plan puts a different expectation [on the need for logistics space] and has changed the tone of discussions we’re having with the 30-odd boroughs in London,” says Holland.

“There’s a recognition of the value of logistics in the role of a functioning city. So, I think local authorities are up for it. They accept the need to integrate these uses.”

He adds: “There’s definitely been a change in mindset and philosophy. I think the Greater London Authority [GLA] recognises the importance of, and critical need to provide, industrial and logistics space in the capital – and I think the London Plan was a watershed moment in that regard. I think the GLA are very much on side. They’re supportive.”

That support may well be unique to London. After all, the pressures on land availability in the capital are such that logistics developers have been forced to lobby the GLA hard, given the far more politically high-profile housing crisis. Quite simply, if they are going to get a look-in, co-location may well be the best available option.

Hines. “Whether it’s from a planning and residential perspective or from a logistics perspective, in some instances you need to look at co-locating both residential and industrial use. The supply-demand pressures need to be at a point whereby the compromise by both parties makes sense. And really, it’s only in London where we’re seeing the pressure on land and demand at such a point where it becomes feasible.”

Even with planning support, however, it is clear that there are few, if any, developers capable of executing a successful co-location alone. After all, the skills and knowledge required to build a successful residential or logistics project are miles apart.

“I think the most successful partnership would be a collaboration between sector specialists,” says Holland. “We’re both looking at the same problem – how do you support the growth of the city? – but with different perspectives. There is the housing need but also the need for logistics and light industrial.

“SEGRO is a sector specialist and a lot of our peers in the residential world are similarly keen to stick to what they do best. It’s got to be a partnership, a collaboration, between different investors and developers.”

So, it would appear that the situation in London has reached the point where co-location is inevitable. Quite how long it will take before other parts of the country adopt similar strategies is a different story entirely.