Ireland supplement: lots of activity in Dublin and Belfast

Look east along the River Liffey from the bottom of O’Connell Street in Dublin’s city centre and the most obvious building on the skyline is a red-brick tower in the middle distance. 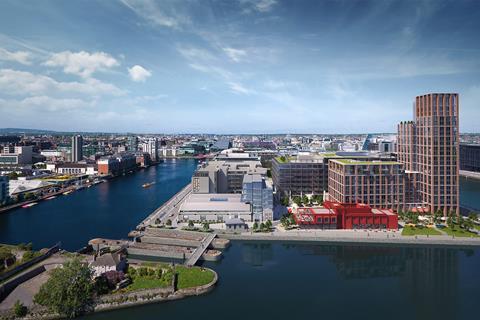 At 22 storeys, the luxury build-to-rent (BTR) scheme is Ireland’s tallest building and forms part of the new 690,000 sq ft Capital Dock campus – thought to be the largest project delivered in a single phase in Ireland.

The company’s aim was to create a vibrant community on the last remaining site in the South Docklands.

Having sold one office building to JP Morgan and let the remaining space to Indeed – both more than 12 months ahead of completion – and with residents moving in, its goal is being realised. 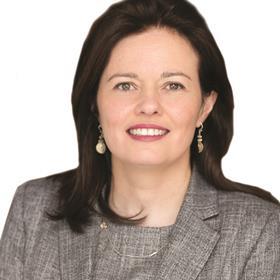 Property Week spoke to Kennedy Wilson’s head of Ireland, Alison Rohan, to find out about the company’s vision for Capital Dock and the part she believes it will play in Dublin’s evolution.

Kennedy Wilson has owned the site since 2012, when the recession had hit and Ireland was on its knees. There had been no development for a year and wouldn’t be for another three.

“We looked at the fundamentals of Ireland,” says Rohan. “The advantage of being an American company is that you can stand back. We felt that once things settled down and returned to normal, there would be this opportunity to create a large campus on a prime South Docklands site that top companies would want to take space in, surrounded by residential and retail space and a community.”

The team looked into what had and had not worked at Canary Wharf when the business district was first established. “Now, it’s a vibrant retail destination with activity in the evenings and at weekends but initially, come 5pm on a Friday, that was the end of it,” says Rohan.

Taking inspiration from the best bits of Canary Wharf, Kennedy Wilson spent a couple of years on the masterplan and acquired buildings on the periphery of the site, including Three Locks Square and 10 Hanover Quay, which it felt would add to the campus and it has earmarked for redevelopment. Once these two buildings are completed, the site will total 4.8 acres and will comprise a total of 900,000 sq ft of built space.

Kennedy Wilson received planning permission for its masterplan in October 2015 and began on site in early 2016.

The residential component, which was completed in January, comprises 190 apartments across two interlocking blocks – the tower known as the Hailing Station and the Keystone building – and East Lofts, a smaller building elsewhere on the site.

The luxury flats, rents for which start at €3,300 (£2,800) a month for a 1,000 sq ft two-bedroom apartment, are among the most expensive in Dublin. The idea is that residents can expect service similar to that of a five-star hotel. Amenities include: two lounge areas and a kitchen and dining room, which residents can use as an extension of their homes or book for private dinner parties and events; a cinema room; a games room; a business centre; a gym; and three outdoor terraces.

Of the flats, 31 have been let and Rohan expects all 190 apartments to be let by this time next year.

The lion’s share of inhabitants are expected to be professionals but Kennedy Wilson hopes to attract a broad range of residents including families. “There’s no reason anyone from a kid to an old-age pensioner shouldn’t feel that they could live here and enjoy it,” Rohan says.

Kennedy Wilson has incorporated a number of facilities that tie in with the growing move from home ownership to long-term rental, the desire for convenience and people’s increasingly transient lifestyles.

The company is trialling an app that will allow residents to fill out forms associated with their letting, contact the management and concierge teams, have food delivered from the onsite deli and book restaurants, events and cars – Kennedy Wilson has done a deal with Toyota car-sharing company Yuko, whose cars will be available on site.

There will be regular events and workshops to enable tenants to meet each other; and some of the flats will be serviced apartments for people staying in Dublin for work for a few weeks or months only.

“It comes down to thinking about what people want; people’s needs are changing,” says Rohan. “We looked at the US where Kennedy Wilson has 26,000 units and thought about what works there that we could apply here.”

High-density living was one of the US trends Kennedy Wilson adopted. It was one of the first developers to take advantage of the Irish government’s new, more relaxed guidelines on building height.

“I don’t think we’ll be New York any time soon but there is an acceptance that – in certain areas of Dublin – we need to look at increasing building heights,” says Rohan. “There is a finite amount of space and the population is expected to rise by 20,000 people per year in the next 10 years – where are all those people going to live and work? 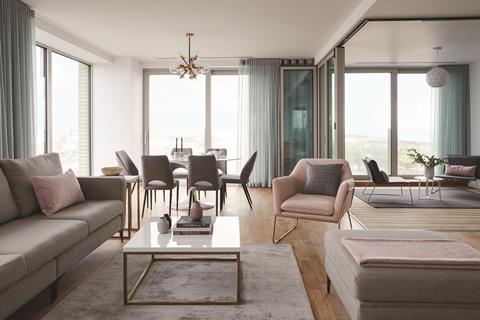 “I think if you come back to Dublin in 10 years, you’ll be looking out of the ninth or even the 15th floor of the Hailing Station and you’ll see buildings of a similar height. They are already being designed and a lot of applications are going in. Whether they go through at the heights envisioned, we’ll have to see.”

For now, the Hailing Station stands out on the skyline. The penthouse apartment has an open-plan living area with a ‘winter garden’ and floor-to-ceiling windows on three sides and is on the market for €20,000 a month. Banks and professional services companies are expected to rent it out for visiting senior executives.

Looking out at the city from the penthouse 80m above the ground, Rohan explains the benefits of the campus’s location. Capital Dock is a 25-minute walk east along Sir John Rogerson’s Quay from the city centre, close to the city’s rugby stadium and the 3Arena, and a 15-minute walk from the beach. Once a new bridge is in place it will be a 20-minute drive from the airport and it is also directly opposite the North Dock, one of the city’s last major undeveloped areas and on which a number of schemes are under construction.

One such scheme, the Exo building, being developed by Tristan Capital Partners and SW3 Capital, is expected to be Ireland’s highest office building at 17 storeys. Meanwhile, Kennedy Wilson is moving ahead with another mixed-use scheme, comprising 375,000 sq ft of office space and around 450 homes, that forms part of what is known as City Block 3.

Rohan says Capital Dock’s proximity to these developments, as well as the mixed-use and high-quality nature of the scheme, was key to attracting JP Morgan and Indeed. 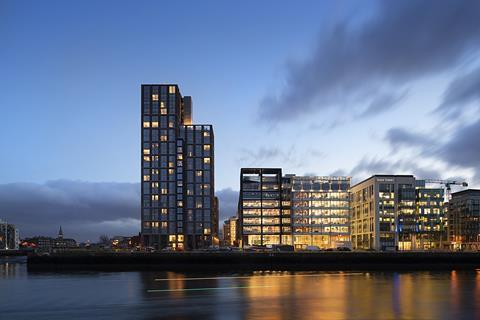 JP Morgan moved in late last year and Indeed is operating from part of its new office space while the fit-out of the rest is under way.

Kennedy Wilson was confident in the scheme and the market, but built the office space with flexibility in mind to attract as broad a range of potential occupiers as possible. “Floorplates in Ireland have traditionally been 10,000 sq ft but that’s changing, particularly as a result of international companies coming in,” says Rohan.

“We built the office space in a way that a company could take a whole floor or several or they could be split horizontally or vertically to suit smaller requirements. That allowed the occupier flexibility and it allowed us, the investor, flexibility, too.”

She believes another boon for occupiers is that unlike other developers, Kennedy Wilson’s model is not to build and sell. Capital Dock is a long-term investment for the firm and it will continue to manage it. “We’re building stock for ourselves and we’re here for the long haul,” says Rohan, who is confident that the fundamentals underpinning Dublin’s office market will only strengthen. 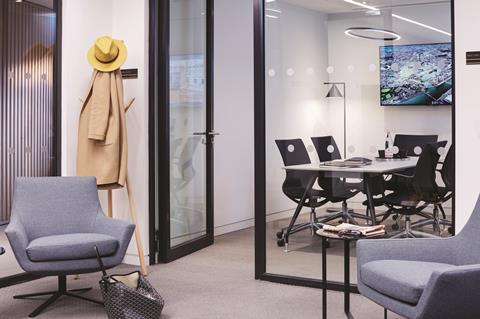 As for the future of Capital Dock, Rohan says she and the Kennedy Wilson team are looking forward to seeing it “come to life”.

“We want to see people sitting out here having a coffee whether they live or work here or not; we want to see all the amenities being used and a community to grow here and make it vibrant.”

If that hope becomes a reality, other developers in Dublin may also choose to go down the ‘campus‘ route.

Ireland supplement: lots of activity in Dublin and Belfast