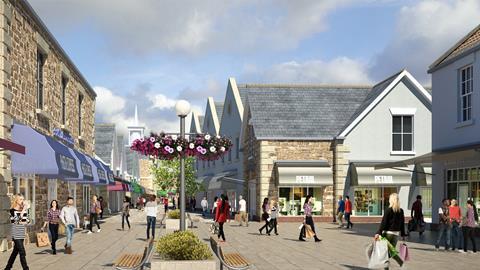 There couldn’t be a worse time to launch a new retail centre. Over the last few years, a slew of established high street retail names have disappeared prompting massive asset write-downs from the UK’s leading retail landlords. And now there is the Covid-19 pandemic to contend with.

Yet now is the time Simon Waterfield finds himself in the unenviable position of trying to push ahead with a new £90m designer outlet village at Scotch Corner, in the north of England. And pushing ahead he is.

Enabling works have commenced at the site and, all being well, Waterfield hopes to start trading by Christmas 2021.

He explains how he intends to go about turning the site into the best retail and leisure scheme in the north of England and what challenges, beyond the obvious, he expects to face.

Waterfield is a property developer and co-owner of the special-purpose vehicle Scotch Corner Richmond, which is behind the new designer outlet. When he acquired the 100-acre site in 2012, the greenfield plot was being marketed by its then owners as an employment site.

“They had achieved consent for B1 office buildings, some industrial units and a couple of large distribution warehouses,” recalls Waterfield. “I said that the distribution warehouses – given the site’s strategic location – could be a runner, but for me it was a humdinger as a designer outlet site, knowing that this area of the world was not served properly [in terms of retail] and had a great need of and demand for a designer village.”

After acquiring the site, an application for the 250,000 sq ft, 92-unit outlet village was worked up and submitted to the local borough council. The council approved the plans, but they were called in by the secretary of state.

Although a public inquiry followed and the inspector ruled in Waterfield’s favour, the whole process delayed the project and it was only two to three years ago that Waterfield’s team was really able to start ramping up letting activity.

“From day one, I said to my letting agents [SPACE – Retail Property Consultants] and consultants that this needs to be a high-quality scheme. I don’t want a mid-market or low-market scheme,” he says.

“Putting Bicester Village to one side, which obviously has highly exclusive brands, the two schemes in the country that are the next tier down are Cheshire Oaks, north of Chester, and Gunwharf Quays, in Portsmouth. So I said to my team: ‘We are basing our tenant line-up on the minimum of those two.’ And that is what we have adhered to and achieved.”

To date, Scotch Corner Designer Village has signed up the likes of BOSS, Calvin Klein, Tommy Hilfiger, Skechers and Levi’s – the largest unit of 10,225 sq ft has been taken by Adidas.

“We’ve got a range of high-quality designer brands and we’re in negotiations with a couple of well-known Italian brands at the moment, so we’ve kept the level of occupant at a very high aspirational level,” says Waterfield.

He adds that in terms of exchanged deals, almost 45% of the site’s floor area is now accounted for. An additional 10% of deals are with lawyers and further deals in negotiation account for another 10% to 15% of space. 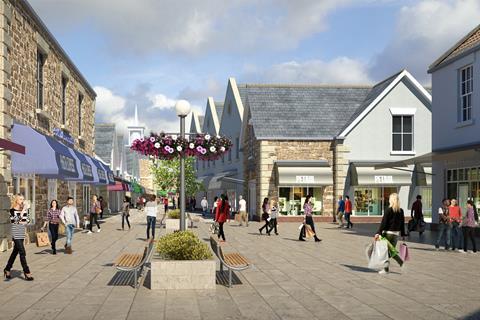 “So I anticipate in the next three months we will have exchanged deals well over 50% and I would think probably 55% with other negotiations continuing,” says Waterfield. “We anticipate being between 90% to 100% let, probably nearer 100%, on opening.”

The reason he is so confident the rest of the space will fill up quickly is the “phenomenal” location of the scheme, which sits on junction 53 of the main A1(M) North/South motorway and the A66. It is at the gateway to surrounding areas, such as the Yorkshire Dales and North York Moors national parks, and also offers access to the Lakes and Scotland.

According to data from Ken Gunn Consulting, the scheme has a catchment of 3.8 million residents within a 60-minute drive – almost 60% of this customer catchment are classified in the top three most affluent ACORN categories.

Furthermore, millions of tourists visit the area annually and Waterfield anticipates passing traffic, day-trippers and tourist visitors will account for around 40% of the designer village’s annual revenue.

Ken Gunn estimates that, given its accessibility, Scotch Corner Designer Village will generate annual footfall of more than 4.3 million and that 28.9 million vehicles will pass the site each year. The consultancy group’s research suggests the development could be a top-six UK outlet centre by expected visitor spend.

Key to attracting these visitors will be the site’s leisure offer. In addition to a wide range of food and beverage (F&B) operators – Wagamama and Five Guys have already signed up and Waterfield says negotiations are under way with a couple of “interesting brands that are different from the run-of-the-mill” F&B offer – the site will feature extensive indoor and outdoor leisure and sporting facilities.

A “very large, high-quality bicycle retailer” is taking 10,000 sq ft at the village and Waterfield says he is weighing up a number of bicycle-oriented leisure options at the moment.

“There are 175 cycling clubs within a 50-mile radius of Scotch Corner and when you look at the success of the Tour de Yorkshire, it [cycling] is a big theme in the area,” he says.

There will be a real mixture to create a major destination

That is not the site’s only unusual feature. There are plans for a farm shop and a 100,000 sq ft home and garden store; planning for the latter is due to be submitted in the next few months.

“So, there will be a real mixture to create a major destination for people. We want people to be there for a minimum of a half day and we believe most will be there for a full day.”

Further down the line, there are plans to deliver a hotel and another retail phase of circa 100,000 sq ft. Waterfield says a planning application for the second phase will “probably” be made later this year.

So, why does he feel so bullish about retail at a time when most are bearish? “If you look at the way outlet trading has grown in the last seven to eight years, at roughly 7% to 8% per annum – whereas shopping centres have grown by a fraction of that and are now going in reverse – you can see how attractive outlets are,” says Waterfield.

“What we are doing is giving people the experience of a day out. People like to buy high-quality goods at a discount. We will be talking about a discount on goods of a minimum of 30%, but probably 40% to 60%.”

Waterfield, who owns around 2m sq ft of income-generating retail and commercial property around the UK, plus circa 450 acres of development land, is the driving force behind Scotch Corner Designer Village alongside Peter Mullen, who founded and sold the Thomas Pink retail chain and was part of a consortium that rescued and rebuilt the Hunter footwear brand.

“Peter is an old friend of mine,” says Waterfield. “We’ve done a lot together and we own a lot together. This is another property in our portfolio.”

Both partners have a strong track record of delivering retail success and are confident that all the ingredients are there to make the scheme the leading retail and leisure destination of the north.

“It’s a wonderful location, it’s highly accessible and it has a wonderful catchment within an hour, as well as an affluent local catchment,” says Waterfield.

“We believe the brands we have already signed up, and are continuing to sign up, will create a phenomenally exciting line-up for people of that region and tourists as well. It’s very exciting.”