Satisfaction with new technologies often rises and falls dramatically. US analyst firm Gartner calls this experience the ‘hype cycle’, reflecting the peaks and troughs that early adopters must endure. 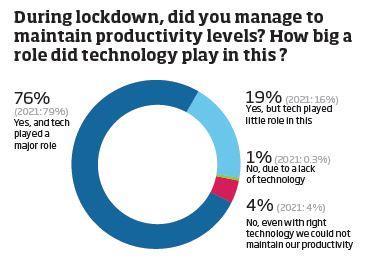 Property Week’s sixth annual Power of Proptech survey, supported by Freeths, shows this cycle in action. Since the Covid pandemic descended, there has been a rollercoaster ride of tech adoption and re-evaluation.

Despite such ups and downs, property professionals continue to believe in new tech. Just over 50% expect a significant revenue lift from tech investment over five years, while another 44% expect some returns. Only 6% dismiss tech’s value. These proportions have barely shifted over the past three surveys.

The link between tech and productivity is also widely seen, with more than 75% of respondents saying tech plays a major role.

Almost half see themselves as early adopters, with 46% saying they will give new tech a try, against 50% who want proof before investing.

More than three in five respondents (62%) say the pandemic has made them more inclined to embrace tech. Those who still favour ‘business as usual’ after Covid remain in the minority, at around one in seven firms (14%) – unchanged since last year. The number following a digital roadmap has also held steady, with around three quarters (73%) either rolling one out or drawing one up. 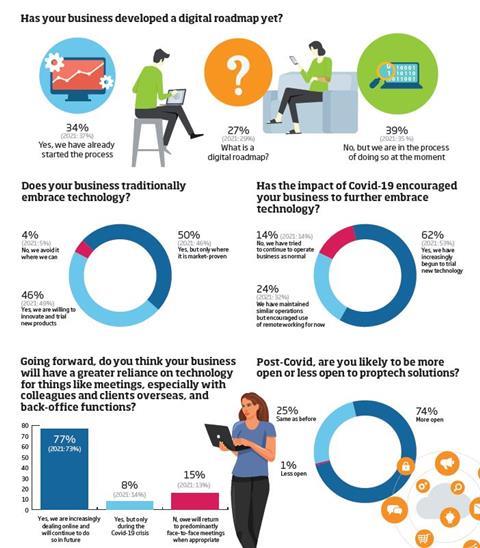 A similar proportion (74%) say they are more open to proptech following the pandemic.

When asked to choose particular technologies worth investing in over the next five years, the sector reveals further ups and downs.

In a multiple-choice question, 39% back artificial intelligence (AI) in decision-making – a big jump from the 20% in the prior two surveys. Around 29% choose augmented reality (AR) and 360-degree video, also up significantly on last year, while 55% cite improved analytics and forecasting tools, up from 49% last time. 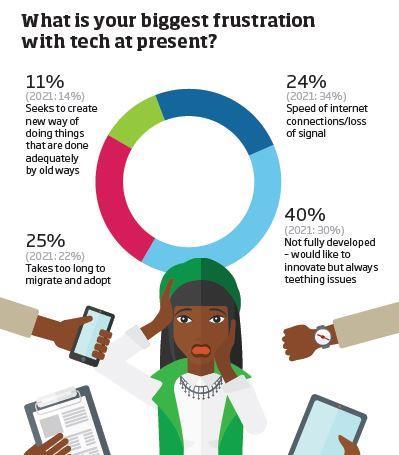 The most frequently chosen area for future investment is still homeworking and digital meeting tools, although its score fell from 82% to 64% this year. The drop suggests collaboration tools are increasingly seen as current, not future, tech. When asked to look back and select the most important tech of the past five years, 46% say digital virtual meeting tools.

Looking forward, respondents choose a broader spread of technologies likely to have a big impact over the next five years, led by virtual reality (19%), digital meeting tools (17%) and back-office automation (16%).

While only 25% say they prefer digital rather than human interaction with service providers, 77% expect their own business to become more digital. Just 16% expect a widespread return to face-to-face meetings. 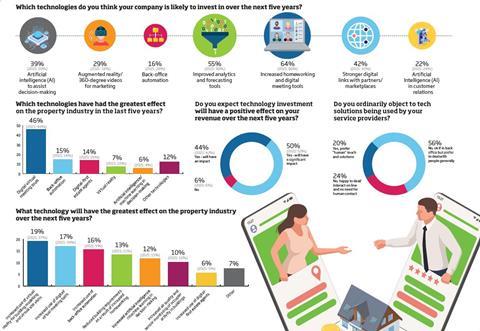 While proptech’s path may not feel smooth, one thing has improved. Poor connectivity has fallen year on year – a problem for 44% two years ago but just 24% this time around.

Darren Williamson, national head of real estate at Freeths, says: “Our survey reveals some evidence of setbacks with digital uptake but that teething issues are being ironed out and a lot of tools that were seen as cutting edge even two years ago are now day to day. It also shows that the property sector has increasing confidence in tech solutions and that it feels they link to business success.

“Is the sector becoming more of an early adopter than it ever has been? Covid seems to have truly opened Pandora’s box.”