Getting up to speed on climate issues

Now is not the time for complacency when it comes to climate issues. COP26 in Glasgow put the fight against climate change in sharper focus, but global conflict, the pandemic, cost of living crisis and shortages have also muddied the water. 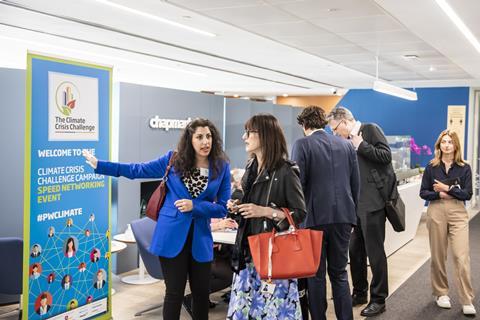 These myriads of political and economic distractions, or challenges, mean the drive for sustainability from those within the built environment must be stronger than ever.

The need for radical collaboration, new regulations and fresh ideas were very much on the minds of the figures from across the industry who gathered last month at the London offices of chapmanbdsp to discuss the next steps forward. The speed networking event, hosted by former PropertyWeek editor Liz Hamson, saw a range of topics thrown out for discussion, from the planning system to social justice, finance to biodiversity, and while all were keen to show what progress they had made so far, there was no room for complacency. 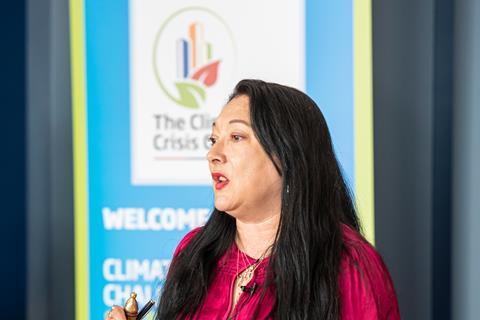 Opening the event, Guy Grainger, JLL’s EMEA global head of sustainability services and ESG and the president of the BPF, was keen to echo this sentiment. Addressing the room, he said: “All of us here who are on board this sustainability train have to be really careful we don’t become an echo chamber, we must do more than congratulate each other on the progress that’s been made so far. 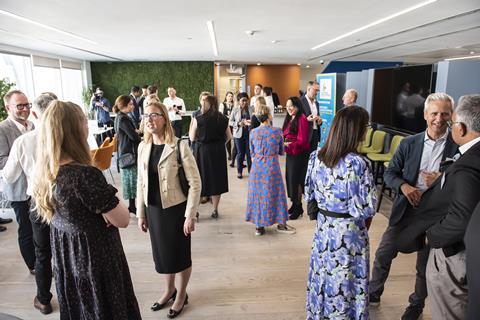 “My request is that we move from being the believers to being the pioneers, because this whole system needs to change for us to hit the targets that have been set globally, nationally or within our business.”

According to Grainger, progress will depend on moving from “science to economics” when it comes to delivering widespread change to the built environment, where he argued that the business case for sustainability had not yet been effectively made.

“It’s all about regulation and compliance right now, frankly,” he said, before issuing a challenge to his audience. “The only way the system can change is through pioneers leading the way and leadership getting empowerment within businesses to put action into place,” he said. “We need leadership, that is how we get from targets and talk – from reporting figures because that’s what the regulation says – to action and credibility for the sector.”

A strong desire for action and radical change was also evident as the industry figures in the room went on to discuss the planning system. 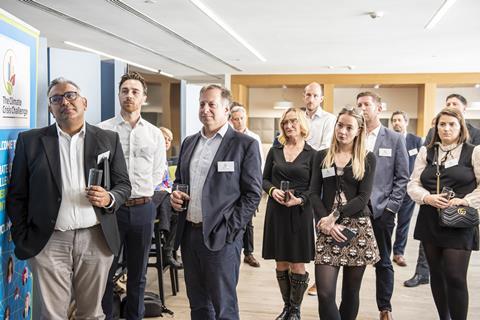 Considering whether planning decisions should be made by national government or local authorities, Lauren Gill, corporate development manager at Octopus Real Estate, said: “I think the consensus here today is there should be some minimum standards laid down from the government to the councils. But the local authorities need to be the ones making the decision on what’s best for their region; we cannot have a symbiosis of planning output from London and Cornwall for example.

“The next question should be how we bring net-zero to the heart of the planning community. The answer has to be to get planners excited about feeling that they’re the driver of change. The message I’ve heard the most today is to ‘rip up the rule book’.” 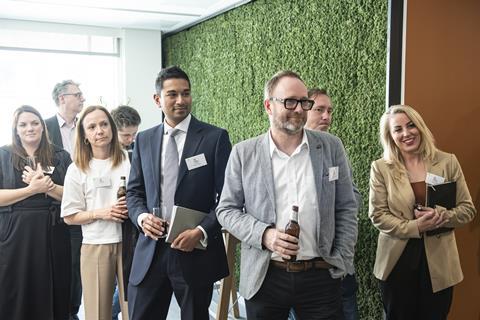 Gill added: “There’s also a lot of discussion around the full carbon footprint of a building, embodied and lifecycle output, and the recent debate over plans to demolish the Marks & Spencer store on Oxford Street has emphasised this. When it comes to demolition versus retrofit, we need the technologies to look at the carbon across the whole cycle, not just relying on EPCs to make a decision.”

Looking more widely at the pathway to net-zero, Yetunde Abdul, head of climate action at UKGBC, noted: “One topic that has kept coming up is what the government can do to support all of this through policy and legislation, or KPI monitoring and carbon pricing.

“Adding clarity to the net zero roadmap is one of the ideas close to UKGBC’s heart. Having a common starting point to work from and to measure and report how you’re contributing to that pathway will be so important for businesses, and this needs to be set in stone. 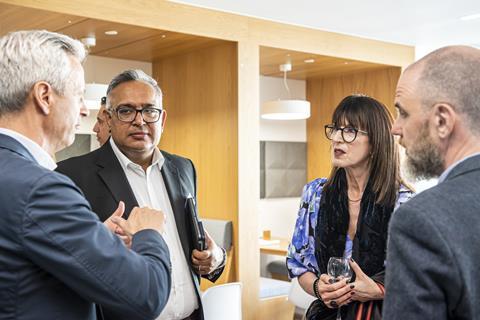 “The other worry is targets trying to look too far into the future, and by the time you get close to 2030, then you start to panic. We want businesses looking at the steps they can take now, aspirations for near-term targets.”

Alana McPhee, vice president, Sustainable Product Group at Barclays Corporate & Investment Bank, said she felt there was a consensus among those at the event that regulations were an important incentive to accelerate the pace of change.“But for green finance to facilitate that change, [companies] need to exceed the regulations. It’s an interesting discussion, because if you end up with a very high standard that no one can beat then what’s the point? So it needs to be a topic that continues to evolve and grow, as the regulations and requirements increase, to navigate [a path] between high aspirations and greenwashing.” 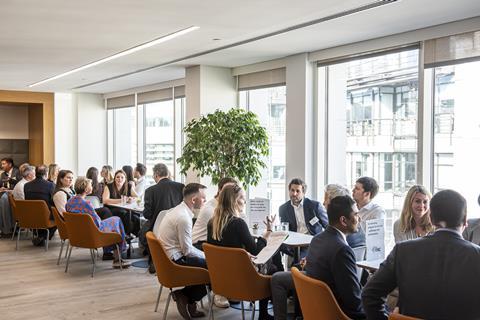 Biodiversity is also set to benefit from new legislation in the form of the Environment Act, and for Daniel Farrand, planning partner at Mishcon de Reya, this legislation couldn’t come soon enough. “Listening to the industry discuss how planning will deliver net zero makes me depressed about biodiversity,” he said. “We are miles behind and it is very clear that not all organisations do understand what biodiversity is. It is not universally talked about throughout businesses and not necessarily at the top of people’s agenda.” He added: “You do worry if this new statutory requirement for biodiversity is a good move, or if you measure something, maybe companies might end up working to the measure and not innovating beyond that line. I disagree; I think the best companies will stay at the top of innovation and keep doing what they are already doing.

“But there are those in that lazy middle of the bell curve who will need to comply when things are put on a statutory footing, and this may be what’s needed to get everybody up and running. Biodiversity is after all the way we survive on this planet, so we know we must reverse its decline. There’s just uncertainty as to how we get there.” 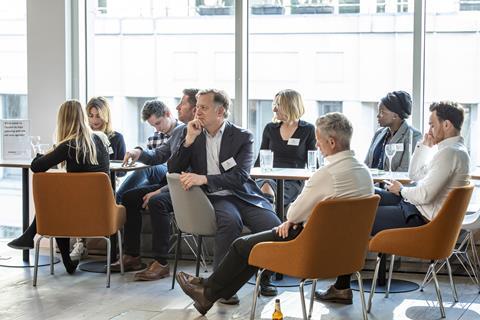 Rob Miller, King’s Cross sustainability manager at Argent, weighed in on climate change’s social justice responsibility and said the cost-of-living crisis had also recently come to the fore. “Climate impact is not equal; often, those from the poorest communities are impacted the most by the climate crisis,” he noted. “The poorest quality housing is often the most carbon intensive and has some of the highest energy bills, and the people living there have the least investment available to do to something about it.

Miller added: “The energy crisis we’re in is exacerbating the social injustice issue, but it also focuses people’s minds on this very issue. But where will green residential investment need to come from? Will it come from the government, local authorities or from private investment? Decisions need to be made locally.”

Grainger summed up the discussions by first calling for more radical collaboration. “For the industry this means sharing more data; where there are successes lets share the information, an open book please,” he said.

“More importantly though, let’s see some failures. We think failure is such a shameful thing, but this industry needs to see the failures, because right now there is no brown risk being embedded into the values of our real estate.” 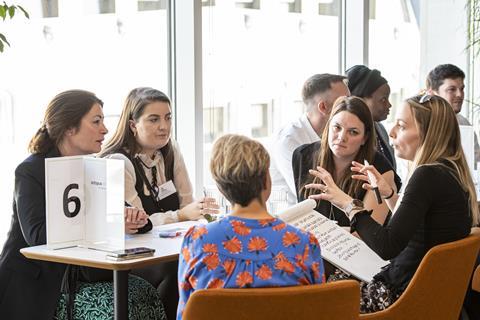 The BPF president also called for more positive joint working and occupier engagement. “We act for both investors and occupiers, and when we ask our investors why we can’t make progress more quickly, over 50% of them say it’s because of the occupiers. And when we ask the occupiers, over 80% say it’s because of the investors – yet they’ve got the same goals to reach net zero carbon. We need to engage with occupiers in a better way.

“What’s the outcome of this in 2022? It’s to talk about the present tense, less of what companies will do and more examples of what investments you currently have in sustainable outcomes, or even better, show us what you have already done.

“Being able to get to the end of the year with some tangible examples of your green credentials is going to be crucial in ensuring you’re credible as a business. So, let’s start moving from the future tense to the present.”