Northern towns and cities have shot up the list of the UK’s hottest office locations in the latest ranking compiled exclusively for Property Week by CACI. 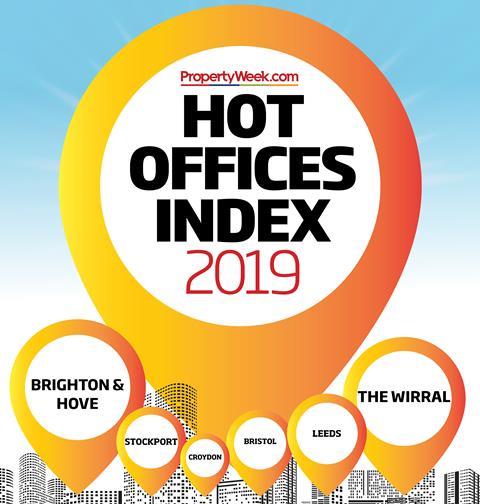 Five of the top 10 locations were northern, with Stockport and the Wirral registering double-digit rises, and Scottish cities taking two spots.

“In our 2019 ranking, the South East is still the top region, but it is less dominant than it was this time last year, with many areas of the north moving up the ranking,” says John Platt, director at CACI.

“There has been a rise in other parts of the UK including the West Midlands and Scotland. This shows that there is a growing opportunity for office development beyond London and the South East.”

To compile the ranking, CACI assessed more than 400 UK locations, taking into account a number of different variables including: workforce demographics, accessibility and the quality of the retail and catering offer (see methodology box). London was excluded from the main ranking but is considered separately.

For the third consecutive year, Brighton and Hove occupied the top spot in the list of hot office locations, with businesses attracted to the city by its “dynamic and lively business environment alongside good transport links to both London and Portsmouth,” according to Platt.

Trafford in the North West leapfrogged Edinburgh to secure second place in the top 50, thanks to an increase in its affluent worker population.

“Other notable shifts include Stockport [moving up 10 places], Glasgow city centre [up 14] and South Gloucestershire [up 23],” says Platt.

In terms of the biggest fallers, Cardiff and Reading both dropped out of the top 10 and Platt thinks things could get worse over the coming months for the latter location.

“The rising price of [Reading] office rents due to Crossrail, coupled with uncertainty over when the line will open, may make potential businesses reconsider locating here in the short term,” he says.

In the capital, Bromley topped CACI’s list of the top 20 office locations, followed by Croydon, Barnet and Lambeth, which all registered the same score.

“It may come as a surprise that some of the more traditional central London worker locations miss out on our London ranking,” says Platt. “Relative lack of amenities relative to worker population means that the City of London suffers.”

For the first time ever, CACI also assessed the hottest locations for co-working providers, reflecting the rapid recent growth of this sector of the office market.

Croydon topped this list thanks in large part to the fact that it offers companies a cheaper alternative to central London locations such as Shoreditch, says Platt.

“Croydon is an emerging destination undergoing huge amounts of change, with the new Westfield/Hammerson development being built alongside office and residential space, making it a good choice for businesses that need office space with good transport links to London but without the high price tag,” he adds.

Brighton notched up second place in the list of hot co-working locations thanks to its “reputation as a centre of creativity and entrepreneurship” and the fact that “31% of the workforce fall into the ‘rising prosperity’ group – the young and urban population who tend to occupy these spaces,” says Platt.

It will be interesting to see how the tables change over the next 12 months.

The ranking assessed 406 UK locations, taking into account: workforce volume/ demographics, accessibility, quality of retail and catering offer, and wifi connectivity. Each location is ranked on each metric and assigned a grade from A (most favourable) to E. The higher the grade, the higher the score. The variables are: