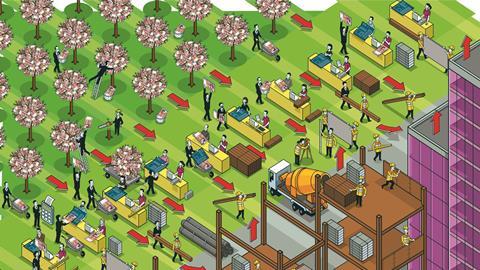 How green is your debt?

When Teekay Shuttle Tankers issued a green bond to fund the building of fuel-efficient oil tankers late last year, the move was met with consternation. How could a company that transports oil around the globe qualify for green finance?

Not surprisingly, the fundraising fell short of its target. Investors were clearly sceptical about the bond issue, classified as ‘light green’ by sustainable analytics firm Cicero – and with good reason, it seems. At the start of this year, Norwegian police raided Teekay’s offices on suspicion that the company had committed environmental crimes in relation to the scrapping of a ship in India.

For the emerging green real estate finance market, the Teekay case illustrates some of the potential pitfalls of eco-friendly lending. If the environmental credentials of a green property loan or bond are not up to scratch, borrowers and lenders alike could find themselves the subject of greenwashing allegations.

Given how carbon intensive most real estate development is, this is a very real danger. On the flipside, if done well, green finance could open up new sources of capital and help the industry in the fight against climate change.

In continental Europe, meanwhile, Crédit Agricole and ING provided what is believed to be the first green real estate loan in Italy, while Goldman Sachs launched what is being dubbed the first green CMBS – River Green Finance 2020 DAC – which was secured by an office in Paris.

Exactly what makes each deal eco-friendly varies, as does the level of public disclosure and independent scrutiny. But there are some common threads.

These are voluntary industry guidelines and stop short of providing prescriptive checklists for borrowers and lenders.

For example, the Green Bond Principles state that the proceeds of a green bond should be used for green projects and outlines various categories of project that would qualify, including “green buildings that meet regional, national and internationally recognised standards or certifications.”

The wording is deliberately vague “in recognition of the diversity of current views and the ongoing development in the understanding of environmental issues and consequences”, according to the ICMA.

The main purpose of the ICMA and LMA documents is to outline what a green loan or bond should look like. As well as offering guidance on what the proceeds should be used for, they describe what sort of processes should be put in place for reporting, target setting and reviewing. Broadly speaking, they advocate measurable targets, transparent reporting and independent scrutiny.

Borrowers and lenders say the principles are useful, but only go so far. For one thing, they are intended for a wide audience – not just the property industry.

Guidance that is more specific to real estate is still to be developed. CREFC Europe, the body representing commercial real estate lenders in Europe, recently convened a working group on green lending.

Its chief executive Peter Cosmetatos says the aim is not to define green but to describe the sorts of questions lenders should ask borrowers about their properties and their strategy, and gain a better understanding of what data points would be most relevant to track progress.

He says there is still a lot of work to be done. “There is a lot of interest in this area, but most lenders are still focused on things like compliance with minimum energy efficiency standards and certifications like BREEAM,” says Cosmetatos. “Very few firms have really dug into how they can encourage retrofitting of existing buildings and manage down environmental risks over time.”

Borrowers and lenders are still working out how best to fill in the blanks in the ICMA and LMA principles. “The principles provide a framework, but what they haven’t done is work out what will go inside that framework,” says Derwent London’s head of sustainability John Davies.

Derwent has come up with its own ‘green finance framework’ that sets out in more detail the standards the company will follow in future green financing deals. These are far more specific and rigorous than the basic requirements in the ICMA and LMA principles. For example, they state that to qualify for green finance, any new development or major refurbishment must achieve a minimum rating of BREEAM ‘Excellent’ or LEED ‘Gold’.

The difficulty with the current approach is that with so much being open to interpretation by individual companies, it is hard to compare individual deals. There is also a danger that companies will take advantage and set out woolly targets that can be easily achieved.

The EU’s sustainable finance taxonomy is expected to help change this. The taxonomy, which has been published in draft form and is to be adopted in the UK despite Brexit, will impose tougher rules on what lenders can label as green and ensure greater consistency.

“At the moment, financial services firms use different criteria to assess what constitutes a green investment,” says Katherine Lampen, partner at Deloitte specialising in green financing and sustainability. “This puts a framework around it so you can compare products and investments. It will make it a lot easier for us to work out whether one investment is better than another.”

To complicate matters, the industry’s understanding of what actions will benefit the environment most and how best to measure progress is constantly evolving. This means a careful balancing act needs to be struck between ensuring that rules are strict enough to prevent bad practice and flexible enough to move with the times.

In real estate specifically, there is an increasing focus on measuring how buildings perform in practice – and the technology to do this is changing fast. Theoretically, new technology should make it far easier for lenders and borrowers to accurately monitor the environmental impact of buildings.

“You can’t price what you can’t measure and there’s a huge need for greater transparency about operational data, given that EPCs and BREEAM ratings are meaningless if buildings are misused,” says Ted Orf, co-founder of proptech venture capital firm Revolt Ventures.

“The emergence of 5G, edge computing and sensors, combined with innovations in battery storage and AI, will make building management systems smarter, allowing financiers to document in real time how assets perform.”

If the industry can get it right, the potential of green finance is enormous. Many of the biggest UK investors are taking the sustainability agenda seriously, but large numbers of smaller players in the market are not as engaged. Thanks to their reach, the UK’s biggest lenders have the power to drive change among the industry’s laggards.

“We have a real estate industry that is hugely fragmented in terms of ownership, but a small number of big lenders could reach a large portion of the real estate market,” says Cosmetatos.

Green finance could also be an effective way of providing developers and investors with an incentive to make environmental improvements. With lenders under pressure to improve their loan books’ green credentials, there is plenty of appetite to finance projects that have a positive environmental impact.

Borrowers, meanwhile, could end up benefiting from cheaper finance. There is some evidence of a green bond pricing advantage and some lenders explicitly offer more competitive rates for green loans. Under Lloyds’ green lending initiative, for example, the bank offers a margin discount of 20 basis points.

However, as things stand, the scope for banks to offer discounts is limited by slotting – the regulatory regime governing their commercial property lending – because it does not allow for the risk weighting adjustments needed to support preferential margins for green loans.

Derwent’s chief financial officer Damian Wisniewski says borrowers should not assume that they will make savings with green finance deals.

“After the announcement [of the green revolving credit facility], everyone picked up the phone and asked how much we’d saved on the margin, but actually the cost is greater than any saving on the margin. This isn’t about saving money.”

He adds that its focus on green finance was driven by the company’s wider sustainability drive – Derwent recently brought forward its target to be net zero by 20 years to 2030.

This is not wholly altruistic. Wisniewski believes that those who do not act now could be forced to later on. “In due course, we think anything that isn’t green will be penalised and even taxed,” he says.

But Wisniewski’s comments on the costs of securing green finance touch on an important issue. As climate change has risen up the political agenda, the number of certification schemes and voluntary codes of conduct on environmental matters has proliferated.

In due course, we think anything that isn’t green will be penalised

Deloitte’s Lampen warns that the sheer amount of reporting property companies do on sustainability is a potential distraction. “Real estate is heavily benchmarked and is continually under pressure for what it has to report compared to other sectors,” she says.

“Reporting is important, but the really critical thing is the strategy and performance. Highly skilled sustainability teams spend half their time reporting when they should be focusing on driving strategy.”

As green loans grow in popularity, the last thing the industry wants is for them to become just another source of administrative burden. Green finance has the potential to really help the industry to tackle climate change, but it can only do that if it is used appropriately and with the right level of regulatory support.