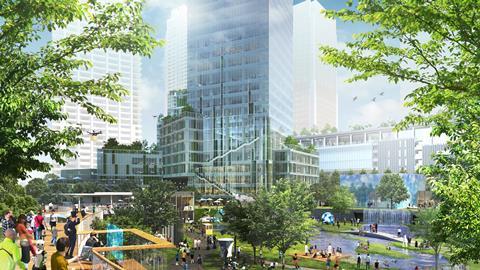 Walk across Umeda’s main footbridge and pretty much everything you see, from department stores to offices, from hotels to six of the district’s seven train stations, is owned by one company: Hankyu Hanshin.

The business district in Japan’s second city, Osaka, is already an impressive sight thanks to the brilliantly futuristic Grand Front Osaka – a 19-acre mixed-use office, retail, hotel and residential scheme developed by Hankyu Hanshin in a joint venture with 11 other companies and completed in 2013 in the first phase of the Umekita redevelopment.

Now, as all eyes are on Japan as it hosts the Rugby World Cup and prepares to host the 2020 Olympic Games, the Japanese real estate and railway giant is gearing up with its partners for the mammoth 40-acre second phase of the Umekita scheme.

The goal is for Osaka to take on Tokyo. It is an audacious vision, but as Akihiko Taniguchi, executive officer of Hankyu Hanshin’s Umekita area management development division, explains to Property Week following a tour of the site, the pieces of the puzzle are finally coming together.

“It’s cheaper than Tokyo and people are more reasonable”

Despite its humble beginnings – 150 years ago it was flat agricultural land (Umeda means plum field in English) – Umeda has long been the centre of business in Osaka, which is why the first train station in the city was built here in the 1870s.

Commerce in Umeda grew so quickly that by 1910, the old station had been demolished and replaced with a bigger one.

Fast-forward 100 years and the formation of the Umeda Area Management Alliance in 2009 between Hankyu Hanshin, Japan Railways (JR) and the joint venture company that owns the Grand Front Osaka marked an important step change in development.

The aim of the alliance is to improve the business and retail environment of Umeda and mitigate some of the economic damage created by Osaka’s declining population. “Underpopulation and the desire to turn Umeda into a business district meant we had to team up with our competitor [JR],” says Taniguchi. “That was the motivation for this alliance.” 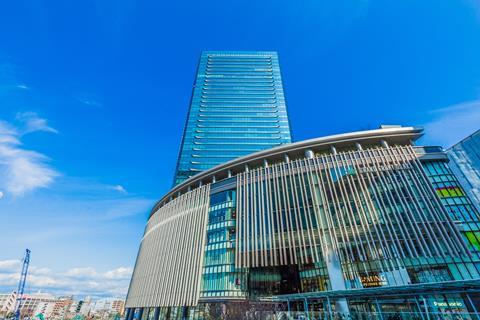 At the heart of the new business district is Osaka Station — which is owned by JR and has been knocked down and rebuilt five times since the 1870s, most recently in 2011. Umeda’s seven stations bring an estimated 2.5 million people to the area every day. Only one other area of Japan boasts a higher footfall: Shinjuku, Tokyo.

Hankyu Hanshin, which already generates more than 50% of its ¥224.7bn (£1.68bn) annual real estate revenue in Umeda, believes the area has the capacity to handle far more traffic. It says that two more train stations – a JR station that will connect directly to the airport and a Hankyu Hanshin station, which has yet to receive planning consent – are set to be built in Umeda as part of Umekita Phase Two.

It is hoped that this will increase the number of inbound passengers to the area and, in turn, make it a more attractive place to shop and to do business. 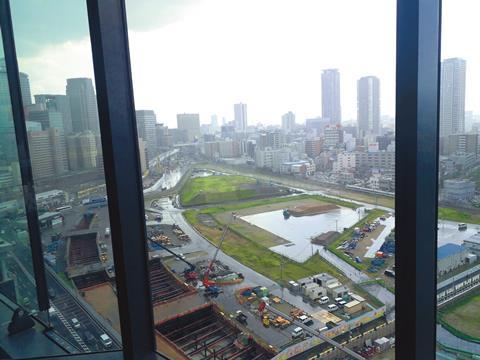 Ready and waiting: view from the Osaka Grand Front of the site where Phase Two will sit

Hankyu Hanshin hopes the two phases – the culmination of 17 years’ work – will be designated as one 59-acre business improvement district (BID), which would be one of the first public-private partnerships under the new BID regulations introduced in 2018.

Norio Mizuno, manager for Bay Area development at the city of Osaka government, says that such is the momentum behind the scheme that even if there is a change in government, it is unlikely to hamper progress.

“The people in charge of the project might change, but the project keeps going,” he says. “In Japan, a political party would never stymie a project.”

Taniguchi adds that the planning system in Japan is different from that in countries such as the UK.

“In Japan, the private sector has more influence on development,” he says. “As long as all the partners in the joint venture company agree on what needs to happen in Umekita Phase Two, the city government is on board.”

The challenge now will be to get occupiers on board. Azusa Takada, assistant manager of Hankyu Hanshin’s urban management division, does not think this will be a problem. 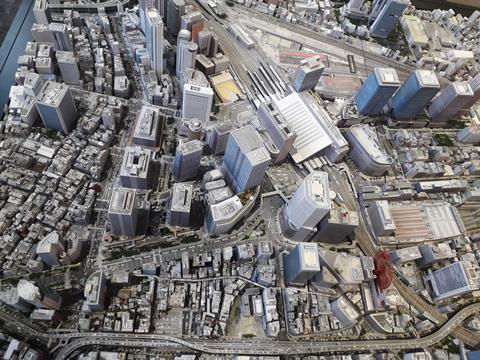 Mapped out: an architectural model of Umeda’s future

Companies will be attracted by the general business environment and relative cost, she says: “It’s cheaper than Tokyo and people are more reasonable. It’s also less crowded compared with Tokyo and a train journey into town takes less time.”

So, rather than simply trying to encourage businesses to move from Tokyo by promoting the city’s relative affordability, Hankyu Hanshin is trying to offer a more appealing business environment, says Takada.

This is where GVH#5 comes in. The co-working space and start-up school, which Hankyu Hanshin has been investing in, is inspired by Canary Wharf’s Level39 and offers cheap co-working space, as well as small offices for start-ups of up to eight people for ¥18,000 per month.

Kengo Nikawa from Hankyu Hanshin’s urban management division says the company makes little to no profit on the rent. The idea is that businesses will mature here – thanks to Hankyu Hanshin’s financial investment and business support – then move on to the more expensive and central co-working space in Grand Front Osaka.

The hope is that one day some of these firms will become big enough to rent an office building from Hankyu Hanshin somewhere in Umeda.

Hankyu Hanshin is also trying to promote Osaka by making Umeda a tourist destination. When I visited, the firm put me up in a four-month-old hotel just outside the Umeda area. Within Umeda, it owns five hotels and a sixth is opening in November this year.

Hankyu Hanshin knows that hotels alone will not draw tourists to Umeda or Osaka. The city needs a cultural quarter – somewhere with history and hipness. It is hoping Nakazakicho will fit the bill. 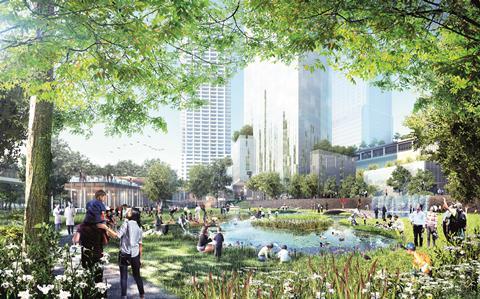 The only neighbourhood in Osaka with buildings that survived the bombing campaigns of the Second World War, the area’s architectural uniqueness gives it an old-fashioned charm missing from many Japanese cities.

Locals riding bicycles down alleyways flanked by narrow early-20th-century buildings occupied by craft shops, cafés and art galleries make this quaint spot feel a million miles — and a hundred years — away from the glistening steel towers of Umeda. In reality, it is only a 10-minute walk. “It’s like time travel,” Hiroki Kawame, manager of Hankyu Hanshin’s urban management division, declares.

Kawame is not concerned about the threat of gentrification. He insists Hankyu Hanshin has no intention of developing in Nakazakicho because “it will undermine the local colour”.

He adds that while there are exceptions, most developers are not building big apartment complexes in the area because of government regulations limiting the size of residential buildings on its narrower streets.

While it may yet be a far cry from Tokyo in terms of being a global business location, there are signs that Hankyu Hanshin and other developers’ investments into Umeda are beginning to pay off. The business and retail district can already brag that it has the largest amount of retail space in one area anywhere in Japan.

Office occupancy in Osaka and the Umeda area is also high, with a CBRE report for Q2 2019 stating that vacancy rates have fallen to an all-time low of 1.2% for the whole of Osaka and 0.2% for Umeda.

There are, however, significant challenges ahead. With the 2020 Olympics in Tokyo less than a year away, the resources of the entire construction industry are stretched and costs have soared.

Takada admits that she is concerned about how rising costs will affect the profitability of the schemes the real estate giant is planning.

Then there is the question of competitiveness. Hankyu Hanshin is so dominant in the area that it could be perceived as monopolistic. Hiroyuki Uematsu, general adviser in Hankyu Hanshin’s urban management division, strongly disputes this suggestion, arguing that the company cannot act against the public interest because 50% of its shares are owned by Osaka residents. 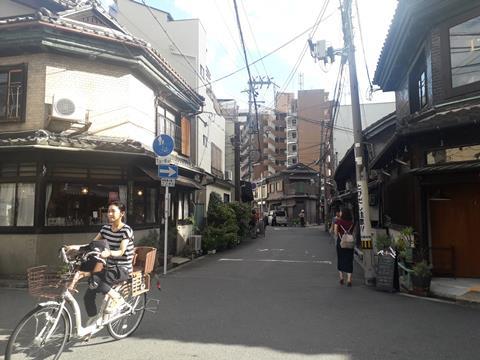 He adds that its projects in Umeda pursue the public interest by providing better public transport and open spaces for all.

Another potential issue is Umeda’s dependence on retail. Although the business district’s high density of shops, restaurants, bars, cafés and department stores is presented as a strength, the Japanese high street – like the British high street – is struggling.

Yet, he is still incredibly bullish about Umeda’s retail offering. Kawame argues that the gap left by Chinese shoppers has been filled with domestic shoppers and tourists from other countries. These visitors flock to Osaka to shop in Umeda, but also to experience the nightlife in Dotonbori and to see Osaka’s famous castle.