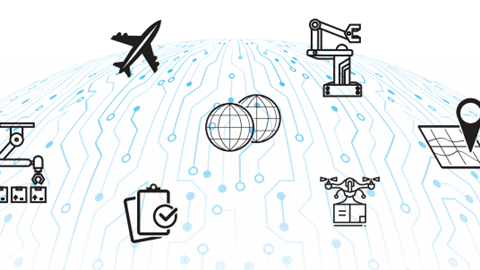 Sentiment among the industrial and logistics sector is still strong, according to the results of Property Week, Savills and db symmetry’s second annual market census, in association with Analytiqa.

Almost 300 professionals from across the sector took part in the survey, more than a third of whom were occupiers keen to have their say on the state of the market. Most encouraging for the sector was that more than half of occupiers who took part (54%) anticipated requiring more space over the next two years. Additionally, 41% said they envisage requiring the same amount of space in the next two years and just 5% said they would need less space.

Occupiers specified that their increased space requirement was predominantly (31%) due to the continued growth in online purchases, the pace of change towards new retail channels and increased customer demand for delivery.

However, 21% of occupiers highlighted a lack of availability of warehouse space or labour as the biggest challenge facing the sector, citing a shortage of suitable accommodation for expansion in London as a particular worry by several respondents. Matt Barker, managing director of CBS Logistics, said that “London councils need to ensure that key industrial and logistics spaces are protected”.

All respondents shared the positive occupier sentiment on future demand for space. Overall, 88.6% thought take-up this year would remain similar (54.3%) or increase (34.3%), against a backdrop of robust take-up levels last year. 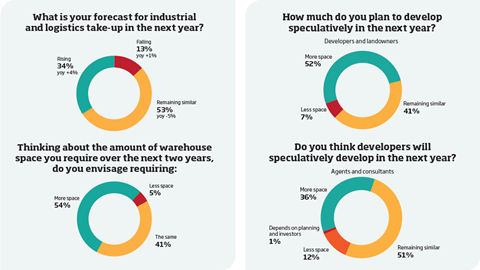 Richard Sullivan, national head of industrial and logistics at Savills, said: “It is very pleasing to see that more than half of occupiers anticipate requiring more space over the next two years. While the survey shows that some are still worried about the lack of supply, Savills is currently tracking more than 9.1m sq ft of speculative development that is due to come out of the ground during this time period, which in theory should help to alleviate some of the pressure currently faced by the industry.

“Even 18 months ago this would have seemed like a daunting figure, but with demand evidently still high and sentiment strong this can only be seen as a positive thing.”

Developers and landowners have been buoyant in their site acquisitions in the past year and this was reflected in the answers of those surveyed. More than half (53%) said they had grown their land banks in the past six months, an increase on the 47% of respondents who said they had done so in the previous year’s survey.

“Even 18 months ago 9.1m sq ft speculative development coming out of the ground over the next two years would have seemed like a daunting figure, but with demand evidently still high and sentiment strong this can only be seen as a positive thing”

The census revealed that developers and landowners were most concerned about the lack of development sites, with 93% of those surveyed stating it was very important or important to them when considering a new industrial and logistics scheme – up from 91% last year.

Whilst lack of supply remains a problem for occupiers, rising rents are now a growing concern. Alongside that, the potential impact of Brexit continues to weigh heavily on occupiers’ minds: 11% said it was the key factor having an impact on their business. One annoymous occupier said: “The sector needs to gauge which businesses will leave the UK after Brexit and that will indicate where the free space will emerge; for example, Telford has many German-owned businesses that may leave come 2019.”

To counter the lack of supply, developers and landowners plan to bring more speculative buildings to the market in the next year. More than half (52%) said they were planning more spec developments and 41% said their spec pipeline would remain the same.

Christian Matthews, director at db symmetry, said: “Delays in the planning system are restricting the supply of consented land into the market, causing a rise in rents and increasing land prices. While this is having an impact on the choice of product available to occupiers, it is ensuring the marketplace should be resilient in the future to outside influences such as Brexit.”

Again, developers and landowners considered power supply to potential new schemes a top issue, with 70% saying it was very important or important to them. This was no doubt due to the growing influence of technology in running modern industrial and logistics facilities coupled with the capacity issues with what db symmetry development director Tom Leeming describes as the “dated and underfunded National Grid infrastructure”.

From a technology perspective, warehouse automation was expected to have the biggest impact on logistics; 17% described it as a “game changer”. Predictive analysis (11%) and electric vehicles (10%) were also highlighted as potentially game changing. Interestingly, developers were most sceptical of technology, with no one from that sector selecting any proptech development as game changing.

On the investment front, more than half of investors and asset managers (53%) believed investment levels would at least remain the same this year compared with the record-breaking volumes achieved in 2017, with 37% expecting investment in the sector to increase in 2018.