Japanese knotweed: identification and treatment can help solve a knotty problem for the housing market

The presence of Japanese knotweed can a deal-breaker but is the bad press out of proportion? 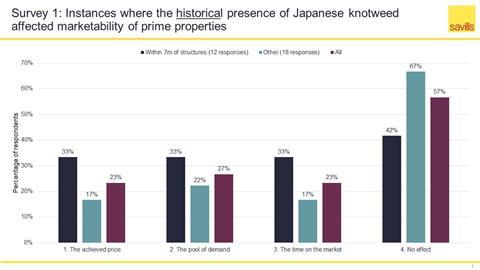 Savills has published the findings of a survey of almost 100 agents, in a study designed to explore the impact of Japanese knotweed on the residential sales process and values.

This study is the first of its kind and, as such, it will be of fundamental interest to residential valuers, surveyors and property litigation lawyers.

There have been numerous legal actions brought against vendors and surveyors with significant compensation being obtained, but in truth the body of evidence for how knotweed actually affects house prices is relatively weak.

Introduced to the UK in the 19th century and originally popular because of its quick-fix screening properties, Japanese knotweed is now perceived as invasive and a potential, though arguably exaggerated, blight. As part of the conveyancing process, sellers must state whether it is present on their property or within three metres on an adjoining property.

Savills asked agents from Savills and Knight Frank for their experience of the impact on higher-value sales, both when Japanese knotweed had already been identified and treated before marketing and when it was discovered prior to or during the sales process. This has enabled our researchers to draw some useful conclusions – the parameters of the analysis and full results can be found in the firm’s report, ‘Japanese knotweed and prime property’, published today.

Overall, the survey found that Japanese knotweed can reduce the pool of demand for a property, create difficulties in the mortgage and conveyancing process and contribute to buyers withdrawing. As with any unwelcome surprise, it is the unexpected discovery that appears to be most off-putting. 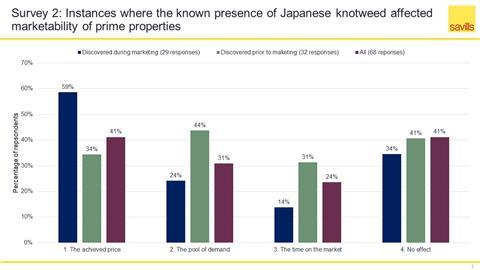 However, this does not automatically mean that a prime property will sell at a discount, especially where the presence of Japanese knotweed is located more than seven metres from a habitable space.

Sellers can of course also mitigate the potential impact on the saleability of their property by having a treatment plan in place and an insurance-backed guarantee for that treatment. Where Japanese knotweed has been treated prior to marketing in this manner, and appropriate management plans, warranties and guarantees are in place, the survey suggests there is no impact on price in the majority of cases.

Where knotweed is or becomes evident during marketing resulting in an impact on value, the price chip can potentially be more than the cost of remediation but it is most commonly less than 5% of the purchase price, the survey found.

The research highlights that price achieved can be impacted by an infestation, particularly if it is only discovered during the marketing exercise having not been previously treated. In these instances, value can be reduced in rare occasions (7%) by between 10% and 20% but in more than half of the cases (53%), while it may have slowed a sales process, it had no impact on value whatsoever.

By contrast, in 70% of cases where the knotweed has been treated and appropriate management plans, warranties and guarantees are in place it made no difference to the price achieved. The majority said the impact was typically less than 5% and only a very small minority (7%) said that values could be impacted by 10% to 20%.

Importantly, this research found little evidence to support long-term diminution of value or stigma having an impact on value even after the knotweed has been treated.