Look to the past to ride out uncertain times

Since the beginning of September, the UK has gone through a series of rather unsettling events, touching various aspects of our private and professional lives. 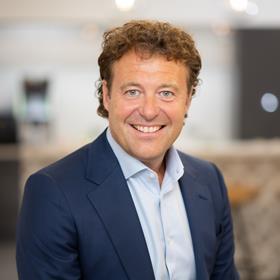 The appointment of the new prime minister was met with mixed feelings, ranging from hope to suspicion and scepticism. Just days after Liz Truss was sworn in as prime minister, the nation learned about the passing of Queen Elizabeth II, which saddened millions of people across the world. No sooner had we bid a final farewell to our monarch than the public got hit with another announcement – of a different kind – as Kwasi Kwarteng unveiled a series of drastic tax cuts as part of the mini-Budget.

What followed needs little explaining – we’ve all seen the headlines from the past few weeks to know that his measures received a lukewarm welcome, to say the least. As a result, the pound plunged to record-low levels against the dollar and we saw widespread confusion within the mortgage market, with products being hastily repriced or simply withdrawn until further notice, leaving thousands of buyers in limbo. At the time of writing, the Bank of England has increased the scale of its bond-buying programme to shore up general financial market stability, the sliding pound and the liability-driven investment (LDI) market.

The interest rate hike announced the day before the mini-Budget affected the investment community, too, making borrowing and servicing debt more expensive for thousands of property owners across the country. Understandably, all of this uncertainty makes many would-be investors wonder whether putting their money into property is still a sensible thing to do.

Right now, some may feel like the very foundations of our society are being shaken and there is very little to fall back on for reassurance given the grim headlines left, right and centre, but it’s important to stay level-headed and turn to the past to see how previous challenging economic scenarios played out and how the market reacted.

My version of a crystal ball

While the British economy is not yet, officially, in recession, many believe we’re not far off – and some believe we’ve been in one for a while, but the yields on commercial property are still surprisingly low, indicating a potential disconnect between the pricing and the economic reality. Something has to change urgently if our industry is to weather this storm.

As the below table spanning 40-plus years’ worth of data clearly demonstrates, today’s commercial property yields are still keener on the whole compared with previous recessions in the early 1990s and the financial crisis of 2008. 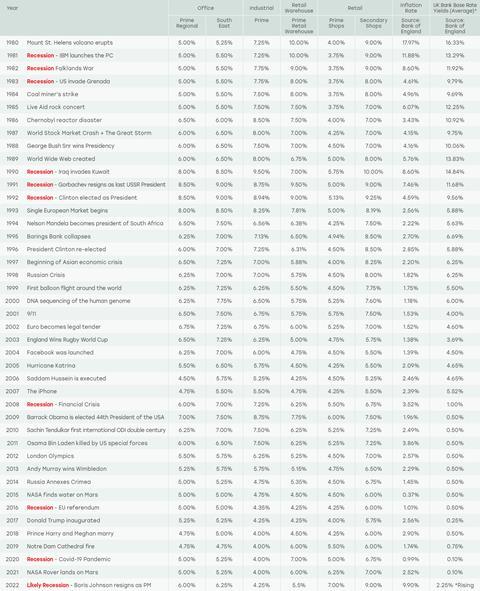 Looking back at the market data from previous recessions is a useful exercise, providing us with a good point of reference and an indication of what we can expect in the not-so-distant future. According to the figures from the data collected by Allsop over the last 40 years, during the economic crises of the 1980s, 1990s, 2000s and 2010s the yields across offices, industrial and retail warehousing were much higher than they are now, so could it be that our market has got to accept a price correction in order to thrive in the future? Failing that, UK commercial property will face liquidity issues and its ability to attract new capital in 2023-24 will be further undermined.

We predict a quick and rapid price correction across all commercial property sectors, and we are witnessing this already. It will be interesting to see the severity of the correction, particularly in the industrial market and, say, City offices where the occupational market appears to be holding up reasonably well. Will it be these sectors that post-correction see the first activity?

For some, the inevitable need for repricing is hard to swallow but it’s a necessary step in reinstating the health of our market, much like leech therapy, which some say is good for restoring blood circulation. We need a quick sharp correction to reflect the current lending environment, which has changed brutally in the space of only four months.

Without the repricing, our market runs the risk of finding itself at the mercy of overseas buyers keen to ride the currency wave. We are starting to see the first signs of overseas interest, but is that really enough to sustain the commercial property sector over the medium term? If past experience is anything to go by, the answer is no.