The historic body has been rocked by a corporate governance crisis that began late last year with reports in The Sunday Times that four directors were dismissed in November 2019 for raising the alarm about a 2018 BDO financial audit. 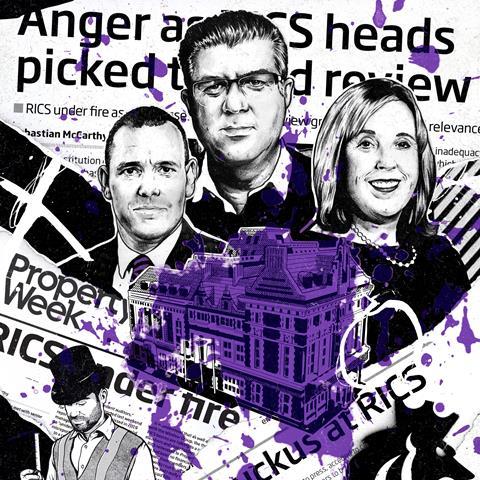 Since then, members have raised a wider range of concerns about RICS and last month, it bowed to industry pressure and agreed to undertake two reviews.

The first is being overseen by independent QC Peter Oldham, who will investigate the events that led to the dismissal of the directors and the 2018 BDO financial audit.

The second is far wider in scope and is looking at the “ongoing purpose and relevance of RICS in 2021 and beyond”. As part of the broader review, RICS has promised that “no voices will go unheard” and is seeking feedback from its 133,000 members.

Property Week asks some of those members, as well as past presidents and senior industry gurus, where they think the organisation has gone wrong and what they want from the broader review.

Few have a better idea of the current mood within the rank-and-file RICS membership than Paul Morris, a director at St James Securities. Morris wrote a post that went viral on LinkedIn last month in which he questioned the value for money of the 152-year-old institution – and was flooded with hundreds of emails and phone calls from fellow members sharing their own grievances.

He sums up members’ current feeling as one of being “left behind” by the body. “It is about the service to members. What am I actually getting for my money? A lot of surveyors like me are non-practising but are still proud to be a chartered surveyor. I feel like we’re just a money machine.”

Morris wants to see the review of the RICS’s “purpose and relevance” address the issue of what members receive for their annual fee, but also hopes the body will reconsider its international purpose.

He asks: “Do we want to be a global profession? Speaking to members abroad who have phoned me, it doesn’t seem to hold the same cachet in Australia or America, so you question what exactly we’re doing there.”

A senior real estate boss with close ties to RICS agrees about the need to address foreign expansion and give UK members a greater say. “At the top of the list of things I’d like to see is a change in the governance structure,” he says.

“The governing council needs to be proportionally representative. You have more than 133,000 members, of which roughly 94,000 are in the UK and Ireland. But the GC, of which there are just over 20 members, do not represent that weighting of membership and that is critical.”

“The leaders have taken the money and ticked the boxes, but never really had the time and inclination to look for serious change. The problem is that you have a president for one year who no one has heard of, and like some charities, no one really takes responsibility for what’s happening.”

Many former senior RICS executives express concerns that the current crisis engulfing the organisation risks undermining the achievements of the past.

Past president Dr Louise Brooke-Smith says: “Organisations should always be aiming to improve, whether through their activity or governance. So, the current RICS reviews are welcomed – even if they have evolved under some sufferance and there is some concern as to propriety.

“Whatever the outcome, I hope a ‘baby and bath water attitude’ doesn’t emerge, with the organisation losing any of the good stuff it has achieved in recent years. There are strong feelings regarding global ambitions, but the RICS was right to move on from its ‘Little Englander’ state.

“The international activity has been successful in terms of serving members, clients, the public and the standing of the profession and that hasn’t been to the detriment of those members in the UK.

“Ours is a global industry and will continue as such, so a global approach is critical. Similarly, its EDI work, while lagging behind other institutions for years, caught up fast and is something to be proud of. But the general relationship with members has not been a success story in more recent times, and governance has now morphed into something that simply doesn’t appear to be trusted. 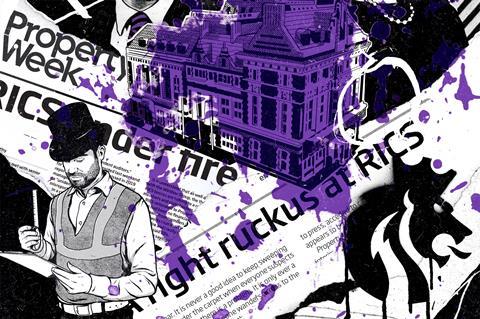 “Yes, it’s a professional body with a Royal Charter and it needs to be business-like, but it also has to be relevant to our sector, accessible to the life blood of members, and transparent in its operation.

“With those goals at the fore, let’s hope the baby is saved but the dirty bath water is thrown out quickly, so the RICS can move on to better days.”

Neil Sinclair, chief executive of listed REIT Palace Capital, echoes the general feeling that RICS bosses have become too remote. “What’s happened is that RICS has lost touch with its members,” he says. “I can’t even tell you who the president is today.”

Sinclair feels that RICS should speak up more about the key issues facing the sector. “With all the challenges in property today, such as the moratorium on evictions, shouldn’t RICS be a body that can comment? It’s not happening. Only Melanie Leech from the British Property Federation is doing that.”

Others argue that if the organisation is to continue down the internationalisation road it needs to be much clearer about the benefits. One former member of the management team says: “There has been an absence of clear articulation to members about the value of internationalisation. Being a member of a respected international organisation recognised as a standard setter contributes constructively to real estate issues that are often global, rather than local. Things like valuation standards and safety standards are types of activity that have a global significance.”

Another ex-senior RICS boss agrees: “With its reputation frayed, it is understandably hard for ‘heartland’ [UK] members to acknowledge the remarkable progress the RICS has made over the past decade as a global brand. It’s easy to forget that this success has raised not only the institution’s influence but hopefully members’ revenues.”

However, that same executive bemoans the lack of openness from RICS leaders. “There’s no denying members’ dismay, perhaps disbelief, at seeing these same RICS leaders back themselves into the corner of self-preservation, locked in a death-fight with their own members. Where has the transparency that RICS ethical codes demand gone?”

Past president professor Graham Chase’s ultimate wish is that RICS address the growing apathy at best, antipathy at worst, among members. “Over the past few years, there has been considerable disquiet by members with regard to the connection between the organisation and its members, and hopefully this will be included as one of the issues for review, among a number of others,” he says.

“Members are seeking ownership and leadership of their organisation so as to provide the facilities and status required by them but also aligned with the public interest profile set out in its Royal Charter.”

For a fellow senior former RICS executive, the key question that needs to be addressed is what RICS stands for. “Is it a membership or public organisation? Is it an executive body or a standards setter? Is it a policeman?” she asks. “At the moment, it is trying to be all these and, as a result, a large part of its UK membership is not actively engaged.”

Members are seeking ownership and leadership of their organisation

Malcolm Raven of chartered surveying company Raven Green would like to see RICS become more of an issue-based group.

“I would estimate that the majority of the communications I receive from the RICS bears little relevance to my everyday activities as a commercial property asset manager and agent,” he says. “Where have they been on the important issues raised by Covid-19 during the past 10 months or so, such as business rates, the rental moratorium ruining landlords and the CVA debacle?”

“In my rural world, up in the North East, we have no contact with the executive team at all. We are meant to be a members organisation, “ he says, adding that the executive team has “lost focus and the members need them to get back to the grassroots”.

While members have their own personal wish lists for the reviews, all hope RICS will take the opportunity to be transparent.

Morris is worried about the purpose review being run internally by chief executive Sean Tompkins and president Kathleen Fontana. “There is quite a level of cynicism among members, which I share,” he says.

However, one past president shares the hopes of many that RICS will address the issues it faces head on: “It is experiencing the worst bit of PR it has had in 150 years, but fundamentally the leadership team work hard and are doing the best they can. I don’t think from the way they’re doing this review they will get it wrong. They will try to sort this out.”

The question is: will they succeed?