It is no secret that Britain has a housing supply crisis. Yet for a long time, the way we delivered homes showed no sign of changing. 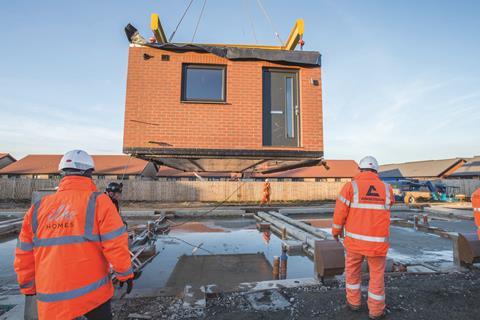 It is no secret that Britain has a housing supply crisis. Yet for a long time, the way we delivered homes showed no sign of changing.

Recently, however, the industry has started to embrace innovation in the supply chain. Modular, where houses are built in a factory, has the potential to play a key role in this revolution.

The sector remains a nascent part of the industry, accounting for around 10% of UK housebuilding, according to Savills’ Spotlight on Modern Methods of Construction report in June.

But in the past year or so, modular has shown signs of finally becoming a mainstream form of housing development in the UK. In November 2019, then-housing minister Esther McVey announced plans to create a ‘Construction Corridor’ in the north of England to power the UK’s modular revolution.

Around the same time, ilke Homes agreed a £30m investment with Homes England’s Home Building Fund – the first time the agency has ever directly invested to boost an offsite manufacturer’s production capacity.

This momentum has carried on into 2020. In February, the Welsh government announced that it is making a £45m investment in modular housing, in an attempt to increase development of social and affordable homes.

The Homes for Heroes campaign in May followed suit by calling on the government to commit to delivering 100,000 affordable factory-built homes on public land for key workers.

Backed by the UK’s biggest housing association and investors, as well as developers such as ilke Homes, Project Etopia and Tide Construction and Vision Modular Systems, the campaign shows that modular is gaining approval from some of the industry’s biggest players.

A role for housebuilders

Many housebuilders are realising that something has to change if we are to fix the housing supply shortage. As the Savills report noted, modular is likely to play a key role in that change.

It is well known that the UK faces a construction worker shortage, which modular can help solve by speeding up production while reducing the need for onsite labour.

While Covid-19 is our immediate crisis, climate change remains the longer-term threat that the property industry, business and political world needs to tackle.

Modular has a crucial role to play here too. Currently, the built environment contributes around 40% of the UK’s total carbon footprint, according to the UK Green Building Council, while home heating systems account for as much as 20%.

The awards follow Etopia Group’s recent announcement that all its homes have an EPC rating of 103/100, making them carbon negative and some of the greenest homes in the world.

“We are revolutionising the industry, and creating the high-quality, tech-driven, net-zero homes of the future,” says Joseph Daniels, founder and chief executive of Etopia Group.

To maintain this momentum in the wake of Covid-19, further support from central government will be vital, argues ilke Homes’ executive chairman Dave Sheridan.

“Government funding will be vital in providing modular with the ability to create thousands more skilled jobs and drive efficiency, quality and sustainability within the housebuilding industry,” he says.

If housebuilding’s future is truly going to be factory-based, more investors and developers will also need to get comfortable with the asset class.

Anastasia Gorokhova, a partner at Osborne Clarke, says: “While the sector is still in its infancy, it has grown impressively over the past few years. But barriers to growth are still evident. One crucial step for UK modular will be getting more lenders and other developers comfortable with it as an asset class, given that it requires more upfront investment than traditional housebuilding.”

But with the likes of Goldman Sachs, Urban Splash and the Welsh government all backing modular, the future of homebuilding could very well be in a factory.