It is the most important shed ever built — in the UK at least. The building, which is nearing structural completion, is located at Harwell Science & Innovation Campus in Oxfordshire and has the potential to reverse the changes brought about by the Covid-19 pandemic and transform all our lives. 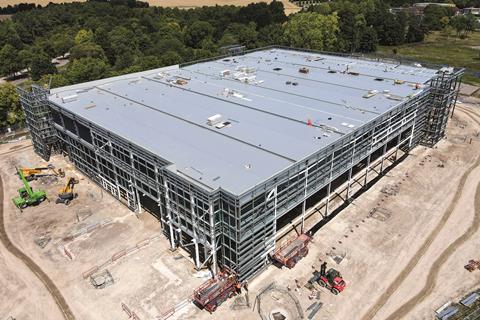 When completed in Q2 next year, the building will become home to the Vaccines Manufacturing and Innovation Centre (VMIC), which will have the capacity to make sufficient doses of a Covid-19 vaccine for the entire country — assuming that an effective and safe vaccine is available at that point.

So, how did the VMIC building come into being and what sort of demand might there be for other facilities up and down the land?

For a government whose competence has been found wanting in recent months, the VMIC is a rare good news story – not that members of the current cabinet can take much of the praise. The decision to fund it goes back to the launch of Theresa May’s industrial strategy in 2017 and the events that led to its inception date back much further.

During much of the 20th century, the UK had an enviable reputation when it came to the design and manufacturing of vaccines, with companies such as GSK, Merck, Sanofi and Pfizer leading the way. Around the turn of the millennium, however, manufacturing was largely moved offshore. The research and development (R&D) of vaccines continued to take place domestically – largely in the biomedical golden triangle of Oxford, Cambridge and London – but we lost the ability to make large batches of doses ourselves.

When work started on May’s industrial strategy, however, one of the key sectors of the economy the government first alighted on was the life sciences. Sir John Bell, chair of the Government Office for Life Sciences and regius professor of medicine at the University of Oxford was one of the key advisers. He is also chair of the Bill and Melinda Gates Foundation’s scientific advisory committee, which is one of the lead actors in the fight against Covid-19 globally.

“In helping the government to shape the sector deal, he came up with a number of project proposals and one of them was the VMIC,” says Angus Horner, director at the Harwell Science & Innovation Campus. “The idea was to do some R&D, some prototyping and start small-batch manufacturing with a view to industry partners and others doing large-scale manufacturing.”

In August 2019, it was formally announced that Harwell had been chosen as the site for VMIC and by the time the pandemic struck at the start of this year, the team was in the midst of finalising the designs. Work analysing the virus – known as structural biology interrogation – moved from China to Harwell as the country went into lockdown, but it was also soon realised that VMIC had a far bigger and more important role to play than previously anticipated.

“One or two of us immediately thought that we needed to build VMIC much quicker and that we needed to build it a lot bigger,” says Horner. “So I phoned up about four different people — who will remain nameless — inside senior government and outside government and said, ‘I think we need twice as much money for this thing’. I was doing that in collaboration with the VMIC guys. Very quickly, in the first week or two, we got nods from inside the cabinet.”

It took a little longer to get the additional funding formally signed off, but ultimately the budget for building VMIC increased threefold, from £65m to £196m. “The budget got increased substantially to accelerate the build and ensure it could do national-scale manufacturing when we get a vaccine that works,” says Horner. “It will be able to manufacture enough to cover the whole of the UK. It also has enough [capacity] to produce vaccines for international use as well.” 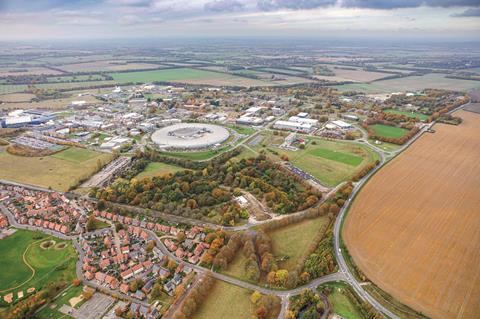 Research field: VMIC is an important addition to the Harwell Science & Innovation Campus

Critically, VMIC has been designed so that it will be able to manufacture any of the candidate vaccines – there are more than 150 in development around the world including the Oxford vaccine, which is in late-stage tests.

“It can manufacture the Oxford vaccine if that works, but there are other candidates internationally,” says Horner. “Similarly, it can work on vaccines for other diseases – whatever it is that comes along next. The depressing reality of our situation now as a species is that we are going to get more of these sorts of viruses and we need sovereign resilience and global resilience so that we can fight them off. It’s a very considered response by the UK government to have a serious investment in this space so that we can protect ourselves and also grow that industry in the UK on a serious basis.”

It is, of course, great news that the delivery of VMIC is little more than six months away and that it will deliver substantial manufacturing capacity. However, it is already clear that more such facilities will be necessary, especially if the UK is to play a leading role in supplying a vaccine to countries around the world. Fortunately, the construction of buildings such as VMIC is straightforward and cheap, even if the fit-out is rather more expensive.

“The real estate shell-and-core bit is actually relatively simple,” says Horner. “We were able to get a design knocked into shape with VMIC pretty rapidly. Essentially, it is a large, flexible, pretty industrial-looking building. [However], there is a much more complicated phase of fit-out and process engineering work than for just an industrial building. The budget for the main construction is a minority part of the overall budget.”

Rob Sadler, head of Savills UK’s Cambridge office, says that biomedical firms are increasingly interested in taking on industrial buildings, rather than the more traditional, office-like labs. Again, cost is the major driver. “So, at one extreme you could have a building that is purpose-built and that would be £200/sq ft to build, which is the normal build cost for an office building,” he says.

“Your life sciences occupier will come in and their fit-out could be anything from £200-£400/ sq ft. If you adapt that to the logistics market and you’ve got the shell, they will still spend the £200-£400/sq ft on the internals, but they’re paying an industrial rent, which is a third of the office or lab rent. It doesn’t work for everyone, but there are a lot of companies that prefer to take logistics space.”

The potential for the UK to become a major vaccine manufacturing hub has not gone unnoticed by the big property agencies. Savills, for instance, recently published research on the subject.

As a country, we will have to stand on our own two feet and be in a position to provide our own vaccines

“In terms of the UK, we think there is going to be a requirement for these super-vaccine hubs – anything between four and 10 facilities,” says Sadler. “They will be primarily what we normally know as logistics and storage facilities.”

Len Rosso, head of industrial and logistics at Colliers International, agrees. “With manufacturing, the productive way of doing it is to incorporate it into some sort of logistics facility,” he says. “You could build something that from outside looks fits for purpose, but then on the inside you fit it out as needed. It will be much more cost-efficient than building something that looks more like a hospital.”

What’s more, the new facilities don’t necessarily have to be located in the South East or even close to major life sciences research institutions. VMIC is different because it is intended as a home to both R&D and manufacture, but as the offshoring of vaccine manufacturing in the late 20th century demonstrated, the manufacturing can really be done anywhere. That, of course, was at a time when manufacturing capacity wasn’t a national security issue.

“They don’t need to be in the golden triangle,” says Sadler. “They will be in other parts of the country where labour is available and at a much lower cost. The size of these facilities could be up to 200 acres each, so we’re not talking about small-scale here. In some respects, it’s almost going back to the old model. It’s clear that as a country we will have to stand on our own two feet and be in a position to provide our own vaccines.”

He adds: “The manufacturing doesn’t have to sit next to where the research is done. The research will be more expensive and, for now, it’s going to be Cambridge, Oxford and London, but the manufacturing can go further afield. It can go further north and I suspect the government is going to do a big push on that in terms of job creation in the North rather than just the South East, in line with the levelling-up agenda.”

VMIC may be leading the way, but there is great potential for the industrial and logistics sector to play an important, if secondary, role in the fight against Covid-19. The caveat – and it is a rather significant one – is that an effective vaccine needs to be available.

Join us in person or online with our new flexible hybrid event format, when we come together and embrace the changes of the new world that we are operating in.