The figures speak for themselves. According to Colliers, there was £7.84bn of investment into the UK industrial and logistics (I&L) sector in 2019, of which 20.7% was represented by portfolio acquisitions. 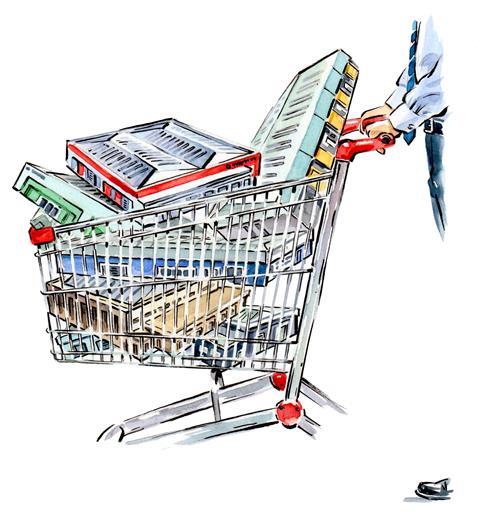 By 2021, however, the volume of investment had grown tremendously, to £17.92bn; so too had the proportion of portfolio transactions, which increased to 38.1%. Only provisional data is available for the year to date, but so far portfolio acquisitions account for 52.1% of investment. So, what explains the massive uplift in portfolio deals?

Having been regarded for years as something of a Cinderella sector, I&L has in recent years moved into the limelight. The rise of ecommerce led to huge demand in the sector, something that was then supercharged by the Covid-19 pandemic. All of a sudden, major international investors wanted a piece of the action – and wanted to plough into I&L at scale.

Dominic Moore, head of asset management and ESG director at Clearbell, agrees, adding that buying big makes a lot of sense for investors.

“I think that you’ve got a unique market in logistics at the moment,” he says.

“Rents are growing, yields are coming down and this has been going on now for three years, maybe four years. There are probably still some pockets in London where there is some growth to come, but certainly that rental growth is now moving out to the other major conurbations. There is still this massive wall of money looking to buy into that rental growth story.”

In addition, Ferranti says that buying up a suite of I&L assets can allow investors to improve the returns profile of a wider portfolio at speed. “They can refinance the overall performance of the multi-sectoral portfolio very, very quickly,” he says. “Otherwise, they’ll be underperforming in terms of the average or total return, which they are benchmarked against for a very long time.”

Indeed, it would appear that time is of the essence for many investors. “There’s still a lot of interest in industrial,” says James Pitt, regional director at Muse. “The conversation we were having originally [with investors] on one of our projects was about one to three units, but that’s expanded now to potentially taking out the rest of the scheme. They want critical mass. They want to get this money placed in the UK quickly.”

Buying up multiple properties in a single transaction is also more efficient. “The reason we think people are doing more portfolio deals is purely economies of scale,” says Len Rosso, head of industrial and logistics at Colliers. “Investors all want to build up big portfolios themselves, so the reality is if they’re trying to do that through one-off transactions, you’ve got all the costs for each deal, such as stamp duty and solicitors’ fees.”

Acquiring a portfolio is also more attractive when it comes to financing. “Let’s say you buy a portfolio for £2bn,” says Rosso. “You can lock in for probably three to five years, as opposed to if you’re trying to buy one-off assets, [where] each time your finance rate is fluctuating depending on what’s happening in the world.”

There are some potential downsides for investors, however, not least the fact that sellers often try to dispose of lower-quality assets as part of portfolio sales.

“In most portfolios, even prime ones, people tend to hide one or two poor buildings – that’s why they put them in the portfolio,” says Rosso. “[But] as long as you’re totally comfortable with those and you can find an exit for them or something to do with them, that’s fine.”

Despite most portfolios containing one or two duff buildings, such is the state of the market at the moment that portfolios that largely contain prime assets are selling at a premium – so for more than the total value of their constituent parts.

“I think the reason is that getting £500m or £1bn of assets in one go is such a rare commodity,” says Rosso, although he adds that there are only four or five players that have the ability to come to the table at that level.

“Previously, if we go back two or three years, I think there was a slight discount [for a portfolio]. Now, you’ve got the reverse psychology where actually, if it’s a really prime portfolio, you’ve got a slight premium attached to it. Sellers know that and buyers know that equally, too. If you want to enter the market, that’s the only way of doing it now, so there is a premium attached.”

Moore adds: “Because there is so much money looking for portfolios, there is competition between buyers and that drives the pricing. So, you can see why there’s that portfolio premium. Buyers are wanting to do one big deal, [to] do it in one lump sum, rather than in lots of little bitty deals. That’s why you get the premium.”

Of course, the situation could change again, but that would require some of the heat to come out of the I&L sector – and few expect that to happen any time soon. Ferranti points to the fact that in February, the proportion of retail spending represented by online shopping reached 27.5%, compared with 19.1% in the same month before the pandemic.

“Retail as a whole has been suffering slightly because of what’s going on globally at a macro geopolitical level,” he says. “But consumers are still spending more online. They’re searching for bargains. This will drive extra demand for the industrial and logistics sector. Strong rental growth is all linked to the lack of supply. We can’t really produce new stock fast enough.”

Indeed, supply is at a historic low. “Nationally, we’re seeing the lowest vacancy rates we’ve ever seen,” says Tom Scott, a director at Savills. “So, I think over certainly the next two to three years, it’s very difficult to see anything other than pretty significant rental growth.

“In time, there should be more supply coming through, but when we look at the supply of units by each unit size that’s coming through the development pipeline, it’s very well spread. There aren’t significant amounts of competition coming through for any one size of unit.”

Brexit certainly hasn’t helped matters. As a result of leaving the EU, it is now far harder for retailers and manufacturers to operate a ‘just-in-time’ delivery model because of increased friction at the border, with the upshot that companies need to hold more stock or parts. “Companies that need the stock in the UK are taking a lot more space,” says Rosso. “They are stockpiling because they need to.”

Finally, Scott notes that the UK and Europe more generally are actually slightly behind the North Americans when it comes to ecommerce take-up, something that investors in the region have noticed. “The North American experience on logistics and the move to online has been slightly ahead of us,” he says.

“Therefore, they’ve seen it happen domestically, so they can see that it’s not some sort of flash in the pan and that it’s going to continue to evolve in the UK and Europe. As a result, they’re getting in that little bit ahead of the curve.”

So, demand for I&L assets isn’t about to decline any time soon. And while that continues to be the case, it seems likely that portfolio acquisitions will be ever-more popular. It’s a very good time indeed to be the owner of multiple prime logistics buildings.