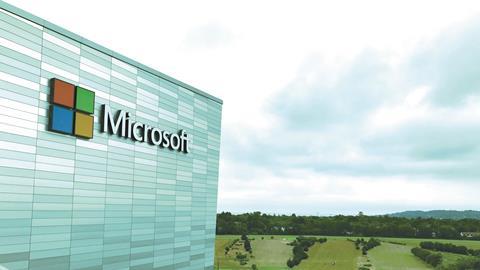 From the outside, the new Microsoft Corporation campus near Dublin looks imposing, but not extravagant. Anodised aluminium panels and gargantuan windows give it a functional look, much like one of the company’s personal computers. But just like a PC, within the casing is a seemingly endless number of complex components.

Last month, Property Week went on a tour of One Microsoft Place, which opened in April this year, to find out from RKD Architects, the firm behind the innovative X-shaped building, how it created the cutting-edge office.

RKD architects David Petherbridge and Justin Treacy were assigned the task of renovating the four buildings back in 2011. The largest software company in the world had occupied the buildings in the south of Dublin since the 1980s and not only was a major client of RKD, but also counted Ireland as the second-most important location to the Microsoft organisation after the US, so the pair knew they couldn’t put a foot wrong. 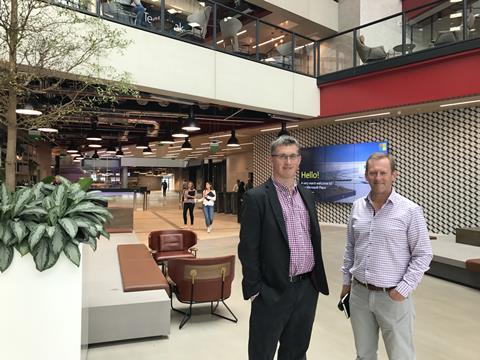 But where to start? The RKD team explored the idea of changing the configuration of the existing campus, but it soon realised that wouldn’t work. The problem was that the business was operating out of four buildings. This meant staff were spending half their time travelling between the different Microsoft offices. “They were basically sitting on a minibus all day, going back and forth,” says Treacy.

A renovation was not the way forward, realised the architects, telling their client: “We don’t think that’s the answer. We think you need a new building, where you can bring all your staff together.”

Microsoft had never developed a building for itself outside the US. “It always had local developers to build offices that it would then fit out,” says Petherbridge. “This idea was completely new to it and it was a big bet for us.”

Luckily for Petherbridge and Treacy, Microsoft was going through a change that would eventually see its focus shift from designing software to offering cloud products. The timing was right for new ideas and the company reacted to their proposition with enthusiasm.

We needed something that is reflective of the company’s culture

“We basically said ‘this is the right thing to do; let’s go find a site’,” recalls Petherbridge.

The site they settled on was at South County Business Park in Leopardstown, south Dublin, where Microsoft already had a base. The local authority gave planning consent with the proviso that the building should not look too big or too oppressive, which presented a major challenge for the architects. “One of the tricks we used was to install reflective panels randomly applied to the building so it would reflect the light differently in different weather conditions,” says Treacy. “This breaks down the mass of the structure.”

Its unusual X shape also helps disguise the sheer size of the seven-storey structure. “We came up with a few architectural tricks to make the building look more intimate than it is,” says Petherbridge. “We tried to reflect the high-tech nature of the business with the materials we used. What we needed was something that is reflective of the company’s culture, its ethos and the way it is going forward.”

Construction began in 2015 and the new 400,000 sq ft single-building campus, which is located on a 5.6-acre site overlooking Dublin Bay, opened for business this April.

When you walk into the main atrium, it is apparent that this is not a straightforward office building. Looking up, you can see a complex web of staircases, pathways and what can only be described as layers. 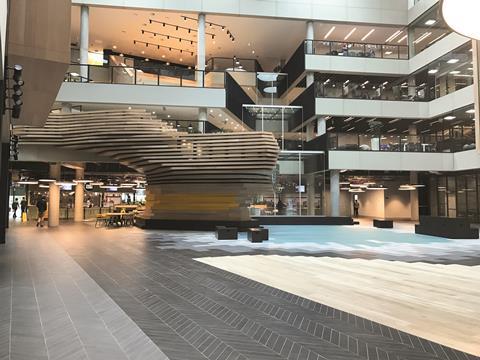 The building also boasts 25,000 pieces of furniture in 50 different styles and, perhaps most surprisingly, 85 meeting rooms on every floor – 595 in total. “We wanted it to be a space you discover,” says Treacy. “It takes time to explore it, to find your way through.”

The two architects used an unconventional approach to designing the internal space. “We thought of it as an island,” Petherbridge explains. “If you put a lot of people on a desert island, what they would do is work together. They would have to collaborate and communicate to get things done. We used it as an analogy for what this building was doing.”

The architects also used this island concept to help zone the different sections of the building. The entrance is the ‘harbour’ and from this ‘port of arrival’, you walk through a passage and climb up the ‘mountain’ (a wooden staircase with irregular levels that brings to mind Escher’s Penrose steps) to the upper levels and the top of the island. There is even a ‘digital lake’, comprising 125,000 LED lights, and a ‘digital waterfall’, both of which serve essentially as giant moveable screens that can be programmed for special events.

“The energy here is great,” says Joanne Morrissey, head of human resources at Microsoft Ireland. “In the past 18 months, we’ve hired about 800 people. It has been a really exciting time of growth,” she says. 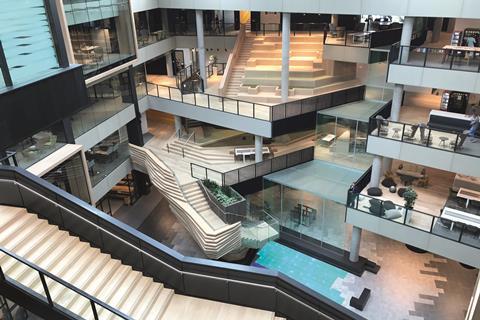 Brief encounter: the space is designed so colleagues will just ‘bump into each other’

“What’s unique about Microsoft Ireland is that this is the only place outside [Microsoft’s headquarters in] Seattle that has every single business unit. Most Microsoft locations in Europe would predominantly be sales offices. Some would have some engineering work or data centres. But we have all of it here.”

The challenge was to create something that wasn’t “uniform”, says Morrissey. She adds that Satya Nadella, Microsoft’s chief executive since 2014, used this building as an experiment to “craft the design principles” that “every Microsoft building” will have from now on. “It’s the largest office project in the group,” she says.

Software engineers, data scientists, digital sales managers and cloud services are all based within the building, which is open 24/7. The 2,000 employees comprise 72 nationalities and cover 70 countries in 34 languages so they have very flexible working hours. The design of workstations is different depending on the roles of the people who occupy them. Some offices have noise-cancelling panels for people making international calls to the US at night.

“We’ve done a lot of research on how different profiles of workers work and we engineered the environment around them,” says Morrissey.

Her team studied data from Outlook to understand how many meetings an employee from the sales department, for instance, would go to.

We engineered the environment around the workers

Microsoft approached the design of the building as if it was developing new software, she adds: “It’s what we call ‘agile development’”. “The way you develop software has changed. You don’t just have a big idea, build it, wait a year and then launch it. You’re constantly evolving and updating as it goes through. On every prototype, you have feedback on the data.”

To encourage communication among employees, Microsoft asked the architects to create a space where people could meet in an accidental way. “We loved the idea of someone in sales meeting with the engineer who designs the Office software,” says Morrissey. “The first month we got here it took us forever to get into meetings, because we kept bumping into people.” 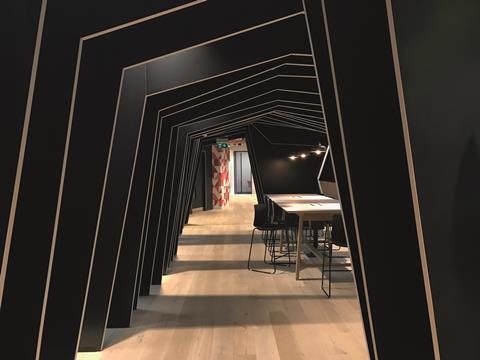 This, too, is something unique to One Microsoft Place, claims Morrissey. The company’s global headquarters in Seattle is used by 60,000 employees across 82 buildings, with 102 shuttle buses to transport people. It is much more difficult to bump into colleagues. There are no shuttles in Dublin, as everything is consolidated under one roof. Even the lifts are hidden away, because the whole idea is to get people moving.

A quarter of workers don’t get enough exercise

“A quarter of workers don’t get enough exercise,” explains Morrissey, while climbing the 99 steps of the ‘mountain’. “This is how you get your daily exercise. I did two media tours after the launch and did 15,000 steps. It covers 34,000 sq ft. It’s bigger than an Ikea.” 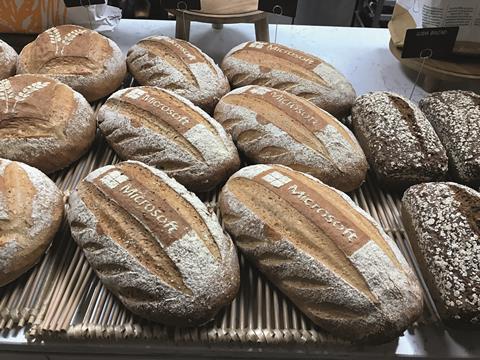 One Microsoft Place, like other significant tech campuses, offers a huge number of amenities. These include five restaurants on the ground floor of the building alone; five barista bars; a bakery with Microsoft-branded bread; an Italian restaurant serving fresh pasta; a stone-baked pizzeria; dispensers of fresh fruit-infused water on each floor; a gym; a yoga room and fitness ‘box’; a music room (there are 150 musicians within the workforce); 40 fitness classes every week; and ping pong and pool tables.

Morrissey says that despite all its “exciting features” Microsoft One Place has not been “a dream job” for RKD’s architects and interior designers. “They [the architects] didn’t just have a free ride for their design; it had to be functional as well,” she says. Treacy adds that there were “checkpoints” all the way along “to make sure we were compliant and achieving what Microsoft wanted”.Unsurprisingly, the employees love it. This was apparent during Morrissey’s guided tour. When she introduces Petherbridge and Treacy as the architects who designed the building, employees endlessly thank them. “We love the building. It’s 10,000 times better than the old one,” says one HR person on the seventh floor.

Although the building is fully operational, it will never be completely “finished”, Morrissey says.

Its features will change regularly based on input from employees. It can also be expanded, if need be. “The business is changing all the time and the building has to be flexible enough to accommodate that,” says Petherbridge.

Just like its computer software, Microsoft’s office is constantly updating.