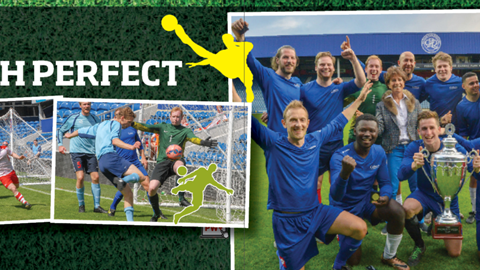 The drama unfolded across 11 hours in sweltering heat, as 16 teams battled for the highly coveted trophy, which was presented by Stephanie Moore, widow of 1966 World Cup winner Sir Bobby.

Despite soaring temperatures, the standard of football on display was hugely impressive, and some of the skills on show wouldn’t have looked out of place at this summer’s World Cup.

The action kicked off at 9am and following some fierce battles in the nine-a-side half-pitch format group stages, where every team got a point on the board, the title contenders emerged early.

Newcomer Titlestone was the only team to emerge from the group stage with a 100% winning record, sweeping all before it in group C – otherwise known as the ‘group of death’.

It was joined in the knockout phase by fellow group winners GVA, Colliers and the Shop Agents Society (SAS), alongside group runners-up Savills, Fourfront, GL Hearn and CBRE.

Despite finishing bottom of its group the Office Agents Society pulled off a surprise, beating JLL in a tense penalty shoot-out to clinch the plate title, which ran parallel to the Property Week Cup. 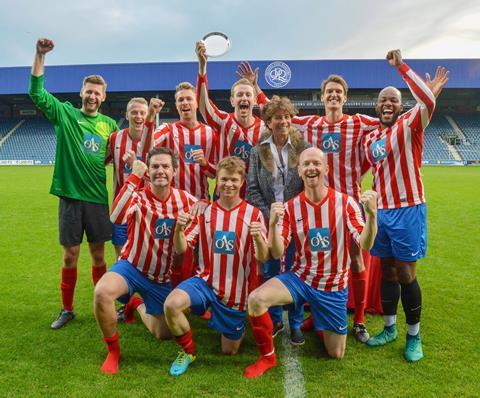 Penalty shoot-outs were also a feature of the main competition, with CBRE and GVA knocked out before the semi-finals in a manner all too familiar to England fans.

As for the semi-finals, the Savills team stepped up its game to oust Titlestone 2-1 in the first match, although there was some good news for the latter as Blane Perrotton’s four-goal haul saw him claim the tournament’s golden boot award.

In the other semi-final, Emmanuel Mensah and Rob Beeching starred for Colliers as the ‘boys in blue’ steamrolled SAS 3-0.

That set up a rematch of an evenly contested group-stage game with Savills that had ended 0-0. Another tight battle ensued, with Colliers emerging triumphant after saving a penalty and scoring a late goal that sealed the victory.

After celebrating in style on the Loftus Road pitch, player of the tournament Beeching from Colliers told Property Week it it was an “honour” to receive the trophy from Stephanie Moore.

For her part, Moore said the event, which was sponsored by Frost Meadowcroft and D2, made an “invaluable contribution” to the work of the Bobby Moore Fund for Cancer Research UK, which supports research into bowel cancer. A cheque for around £10,500 will be presented to Moore at Wembley later this month.

Commenting after the presentations, lead organiser and LSH captain Jon Rea-Palmer said: “It was a cracking day’s football at QPR played in good spirits with Colliers worthy winners.

“The weather was again fantastic and the enhanced format of 16 teams worked well allowing us to raise more than £10,000 for an excellent charity, the Bobby Moore Fund. Being our second year working with Property Week, we couldn’t be more delighted with the way it unfolded.”

Working alongside LSH and event co-ordinator Porterfield PR, Property Week intends to make next year’s tournament even bigger and better and will share details on how it plans to achieve this soon.

Colliers International lift the trophy after a long day’s work