Developer Iain Hutchinson has shown what determination, ruthless analysis and inspired architecture can do when it comes to winning planning permission on difficult sites. Within two weeks – really – of a two-week appeal ending last month, the inspector had decided in favour of a 151-unit residential development on Metropolitan Open Land (MOL) in the London Borough of Bromley (pictured).

Getting permission to build on MOL is extremely difficult, given its status as London green belt and a mayoral policy absolutely opposed to development on such land, however useless a particular site may be.

So how did Hutchinson and his consultant team manage to win permission?

First, it was quite an odd piece of land: the triangular site next to Lower Sydenham railway station is inaccessible to the public and was formerly used as a playing field for a long-redundant adjacent factory, which has itself been replaced by housing by Crest Nicholson – also the result of a successful appeal.

Second, and perhaps most significant, the council was unable to convince the inspector that it had identified sufficient land to ensure an appropriate level of housing supply, including affordable housing, over the next five years.

Third, the quality of the architecture was a significant factor. The inspector said: “The finesse of the design and detailing combine to create a development of exceptional architectural placemaking quality that has a lightness of touch and appearance. The setting along the western edge of the site, the extent of the landscaped and publicly accessible park to the east and south, combined with the lighter scale and mass create a development that relates sympathetically to the site and MOL.” 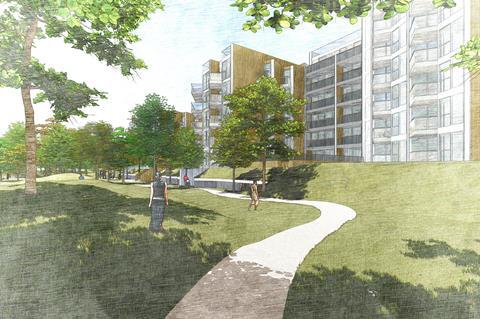 Ian Ritchie Architects, which had designed an earlier proposal for the same site that was lost on appeal, produced a highly convincing alternative that, among other things, opened up the land to the general public, generating a significant new piece of usable open space complete with playground, at no public expense.

It also addressed the thorny issue of ‘double aspect’ with an innovative window design that helped to win the day.

The London Borough of Bromley opposed this development even though it has a lamentable record of promoting housebuilding activity in the borough in recent years. Its rather peculiar barrister didn’t help, at one point in cross examination trying to suggest that the Albert Memorial was relevant to the townscape analysis. Little good it did him.

I wonder what the government’s clumsily named Building Better, Building Beautiful Commission would make of all this. The Ritchie design is admirable, but whether one would call it beautiful is surely too subjective a matter. The point is that it is an excellent proposal that should prompt the mayor to look at MOL policy again.

Incidentally, Bromley’s silly claims for costs against the appellant were all thrown out. Otherwise, the inspector’s decision would probably have been reached even faster.

Rise of the space-time office

Offices are empty much of the time – a vast waste of resource. Now industry space-planning veteran Andrew Chadwick and co-researcher Jeremy Melvin are promoting the idea of exploiting those wasted assets by rethinking how we manage and charge for the space. Their first paper on the ‘space-time office’ was presented at the recent Copenhagen conference of the BCO, which supported the research along with Zurich Insurance.

Their notion is that the ‘square foot hour’ becomes a form of currency, with the potential to link to some form of blockchain. Multiple users would rent space as and when they need it. This could include non-commercial users who need space (perhaps ancillary space used for meetings or sports) outside conventional office hours.

Part of the thinking is that the office building, in the era of millennials, should become more of a social asset rather than simply workspace. Who knows – perhaps developers would donate ‘square foot hours’ to community groups, as a new form of planning gain. The discussion is just beginning.