The stoicism of the British shopper has been reaffirmed since the EU referendum. Putting rabid remainers and leavers to one side – people who frankly deserve each other (Jacob Rees-Mogg and Anna Soubry should help the nation by eloping and going somewhere else) – despite the wearing political chaos, folks have tried to behave as if life must go on.

That stoicism, however, has wavered over the last six months, notably in October to November last year, when Brexit truly hit the headlines, and folks started to behave as if they had or were about to lose their jobs. Sainsbury’s chief executive Mike Coupe put it succinctly when he said the British were behaving as if they were in a recession.

And yet, the economic reality could not be further from the truth. The UK, thankfully, is blessed with virtually full employment. What’s all the more remarkable is that unemployment has not been this low since the current series of labour records began in 1971 – and Britain has the largest pool of people of working age in history.

More to the point, that workforce is experiencing rising real living standards. In a tight labour market, the rate of salary increase is 3.4%. At the same time, inflation (as measured by the Office for National Statistics’ CPIH) is sitting at around 2%. Such a positive gap is reflected in the Asda Income Tracker, which suggests that more households have more pennies to spend.

While most chancellors of the exchequer would bite off the hand of the dealer of such economic cards, Philip Hammond is one of a truly crap political cabal known as the British government’s cabinet. While the cabinet must collectively take responsibility for the political mess in which the UK, embarrassingly, finds itself, frankly just about every MP needs to hang their head in shame for how they are going about their business. In my opinion they don’t give two flying figs about the plight of citizens, depending upon the common sense, good will and stoicism of the British to carry on regardless. 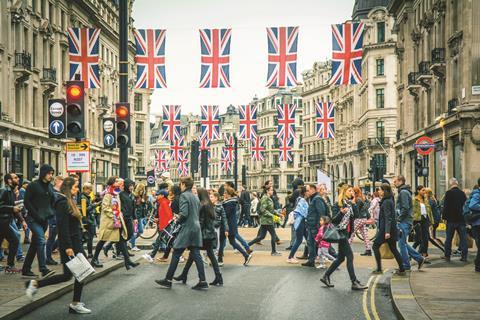 On the rise: the UK is experiencing wage growth and rising living standards

Within this context, retail and retail real estate have not been immune to political and economic pressures. Notable failures at the start of December last year can be reasonably attributed to the UK-EU situation delivering collateral damage for the first time. But still, given the real consumer economics outlined above, the trade should be doing much better than it is – the problem is that consumer confidence remains fragile and jaded.

What lies ahead? At the start of the year my Property Week prediction was that the only thing that seemed certain was that Brexit would be delayed. As to what type of Brexit, who knows? And increasingly, who cares!

As for retail, worrying times are probably ahead as our politicians behave like lunatics – or is that unfair to the latter? While all this goes on, the real agents of change in British retail press on – online in non-food and the limited assortment discounters in groceries. These are the real disruptive forces from within.

Let us hope that the next time I write, politicians are not centre stage. There are sufficient good folks to tell them that they are a disgrace – I hope that they reflect on this.