Regeneration plans will level up the UK

It’s no secret that the UK has a tremendous level of regional inequality. Outside London and the South East, many of our urban areas lag far behind economically. 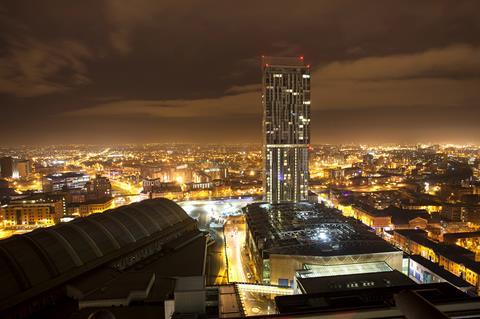 As part of its election campaign, the government laid out its intention to address this inequality and ‘level up’ underperforming and left-behind parts of the UK through a programme of infrastructure development, investing in education, skills and scientific research and development.

The economic benefits of this approach are clear. According to the Centre for Cities, if the eight largest underperforming cities in the UK closed their output gap, the British economy would be £47.4bn larger in total. Manchester (pictured), Birmingham and Glasgow account for 70% of this gap.

A key part of ensuring these areas can be regenerated surrounds cutting planning red tape. The government’s recently announced planning reforms were designed to do just this.

However, some parts of the plan have been labelled by critics as hindering the government’s election pledge to level up the UK.

The key point is that under the planning proposals, funds for new infrastructure and social housing would be raised from a nationally fixed levy.

The levy, handed to local councils, would be applied to the predicted market value of a building development once completed.

Essentially, this raises the prospect of a huge disparity in the market value of developments between London, the South East and the rest of the country, meaning the system could end up raising most funds for areas that already had good local amenities.

So, instead of setting the levy nationally, some want it set at a local level.

Boosting funding will also be crucial. Since 2010, spending on the English planning system has been cut by 55% ­— the greatest fall across all council activities.

While the jury is still out on whether the government’s planning reforms go far enough, they will play a key role in regeneration. The recent pandemic may also act as an unexpected catalyst.

The great working-from-home experiment that Covid-19 set in motion has meant that many people have reassessed where they want to live.

[The new normal] is by no means an overnight fix

An increase in working from home means that many people have been considering ditching homes in the commuter suburbs or central urban flats for somewhere that offers more space. According to data from Rightmove, people searching for a home in a village jumped by 126% in June and July this year compared with the same period last year.

This possible reassessment of people’s lifestyles is likely to have an impact on regeneration, given that it reverses a trend.

According to the Centre for Cities’ Outlook 2019 report, the population of many regional urban centres has doubled since 2002, while the country’s population as a whole has increased by just 10%.

“It is clear that for most of us, living with Covid-19 has created a desire for more space and the ability to get out and about more, which was previously taken for granted,” according to the report.

“As more of us work from home or closer to home, design needs to recognise this shift and adapt to a new world.”

Steven Cooper, head of development and planning at Cluttons, adds: “This is acutely relevant in large-scale redevelopment or regeneration schemes, where every square foot is accounted for and has value attached. But from now on, [it will also be relevant]where space and amenity will get extended and regular use, whether this be in homes, within the development itself or within close proximity.”

Cooper believes we could see a further shift in both legislation and design to ensure the space we live and work in accounts for what is set to be the new normal.

“It is by no means an overnight fix, and not as easy as it sounds,” he adds. “Local authorities will have to work closely with developers to ensure that areas of regeneration are fit for purpose and future-proofed.”

If you want to benefit from more residential property insights, join us for the RESI Convention on 10-11 November 2020.