The benefit of Hines sight

Retail parks in Ireland are bucking the slowdown in rental growth in the wider retail sector, new research by Savills shows.

Between June 2018 and June 2019, rental growth for retail parks rose from 2.2% to 6.5%, while rental growth for the Republic’s retail sector as a whole slowed, from 3% in June 2018 to 1.5%, as a result of retail failures such as Debenhams, Patisserie Valerie and Pretty Green. 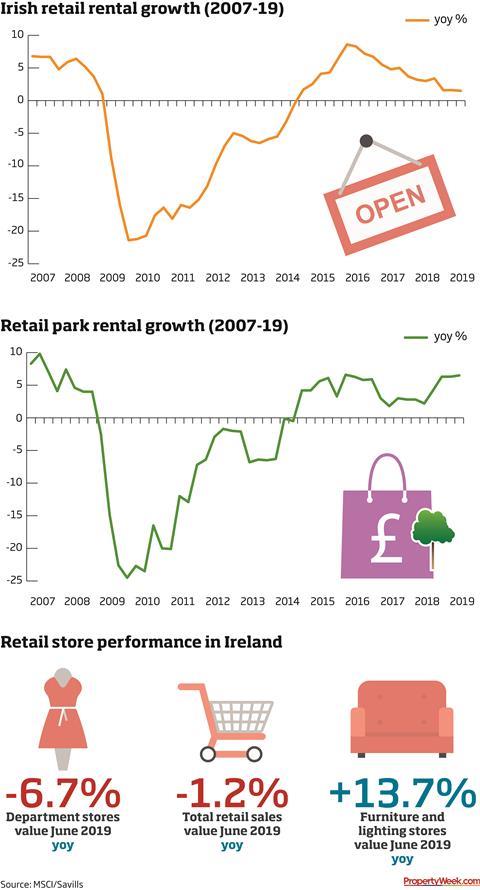 Much of this growth is being driven by the completion of new homes in Ireland, argues Kavanagh. In the first quarter of 2019, 23% more new homes were built than in the same period of 2018.

“People need to fit out their houses with electrical goods, furniture and flooring,” Kavanagh explains, noting that furniture and lighting sales surged in value by 13.7% in the year to June 2019.

Retailers that thrive in retail parks are capitalising on the uplift. Danish home retailer JYSK plans to open 20 stores across the Republic over the next two to three years, while EZ Living Interiors, EZ Living Furniture and Michael Murphy Home Furnishings all plan to expand.

“The recovery in housebuilding is driving the strength of the retail warehousing sector,” Kavanagh says. “All economic indicators are pointing in the right direction in Ireland at the moment.”

However, he adds that the pressure of political uncertainty around Brexit could cause housebuilding to slow.

“Brexit is affecting the residential market in the UK and could have an indirect effect on Ireland,” he says.

The benefit of Hines sight