The Arc’s passage to economic prosperity

The government’s Industrial Strategy focuses on developing the UK’s knowledge-based economy – a vital part of future-proofing our country’s competitiveness.

One of the most successful areas driving this part of our economy is the Oxford-Cambridge Arc which now contains more than 20% of the UK’s entire science and technology sector’s floorspace.

The stratospheric success of the Arc’s knowledge economy has driven office rents up 11.9% in the last year as spinouts and other universities vie for valued space, our latest research shows.

That now means it is almost as expensive to rent an office in the Oxford-Cambridge Arc region as it is in areas of London. Prime office rents in Cambridge now stand at £45 per sq ft, while Oxford follows closely behind at £40 per sq ft. These are only slightly below the key London markets of Canary Wharf, where floorspace attracts a premium of £48.50 per sq ft, and the rejuvenated area of Stratford where the average sq ft costs £48.

Compared to an average of 2.2% growth in prime rents in other regional cities in the UK, there is clearly a high demand for business to be based in the region.

And this Oxbridge office boom is not showing any signs of slowing down. 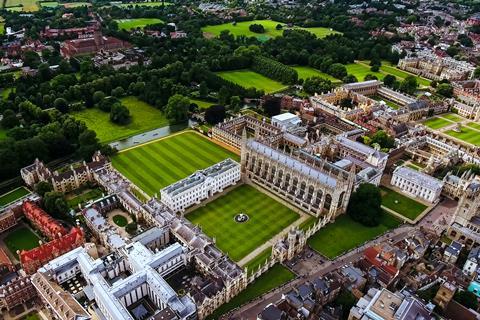 The Cambridge office market is on track for its busiest year since 2014 at a time when brexit means we are in one of the most uncertain economic periods in living memory. We still predict Cambridge office rents will break the once unthought-of £50 per sq ft mark within five years.

The city of Oxford is now a global hotspot for innovation and technology transfer. Billions of pounds of public and private investment flows into the fast-growing spinout companies, national research facilities and infrastructure situated there.

This has driven an appetite among institutional investors, like Legal and General, who recently entered a £4bn partnership with the University of Oxford to build science parks and thousands of homes for staff and students over the next decade.

And, it’s not just office space that is attracting a price premium in the Arc. In Cambridge, which Apple, Microsoft and Google now call home, house prices have risen by 73.4% over the past decade, while Oxford has seen its prices increase by 66.8%.

But, to solidify Cambridge and Oxford’s place in the list of leading global tech hubs, policymakers in the UK must be more pragmatic about relaxing planning so that economic growth can be better supported. There is a real threat that if the government doesn’t start taking infrastructure seriously, it will be impossible to bolster economic growth in these tech hubs, as innovative alumni spinouts look further afield for better facilities and housing.

The University of Oxford and Cambridge University are brands synonymous with innovation. But the brands alone will not be enough for the Arc to smash through the glass ceiling which threatens to halt growth.