Taking the iconic former Topshop flagship store on Oxford Street, our concept reinvents and transforms it into ‘busy space’ for the 21st century, blurring the boundaries between life, work and leisure and condensing these uses into a single hub. 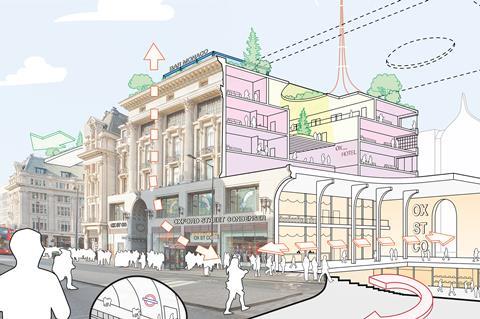 The ‘busy space’ concept intensifies the uses within the building to create a compact, high-functioning, ‘condensed’ hub, which connects to an elevated walkway that takes the pressure off the notoriously congested Oxford Street pavements and Oxford Circus Underground station.

At roof level, the store is the key access point to interconnected, modular, high-level rooftop walkways, which connect the length of Oxford Street – the ‘W1 Connector’.

This offers a slower, more peaceful route through the West End, bursting with plants, and with numerous vantage points to take in spectacular views across the city.

The W1 Connector will be populated with small bars, pop-ups and cinemas, and will also re-establish the famous AIR Studios (the independent recording studio complex founded in 1969) for a new generation.

The first, ground and lower-ground floors are interconnected to provide dense, flexible and relevant shopping spaces, which can be curated to create immersive experiences, alongside a vibrant mix of food and beverage outlets. Short-term leases and affordable rents will make this premier retail location energetic, vital and relevant.

At lower levels, the building links into existing transport infrastructure, with a new access straight from the tube to the building. This is reminiscent of the ‘ekinaka’ shopping experience – a Japanese concept meaning shops inside railway stations – which offers a more fluid and efficient connection between the city’s transport infrastructure and retailers, while reducing congestion on the street outside.

From the second floor upwards we have added bijou residential apartments, where residents have the chance to live in the centre of the city and be a part of Oxford Street’s renaissance as a new cultural district.

There will also be student accommodation, which can become affordable hotel rooms during the holidays. This makes the most efficient use of the building and creates an affordable central place for tourists to stay. It also boosts the night-time economy by bringing a greater diversity of people to the centre, with a short and safe trip back to their accommodation at the end of the evening.