Historically, little consideration was given to office provision in warehouses. Stretching right back to Victorian times, offices were often shoe-boxed sized rooms crammed into the rafters of the building. 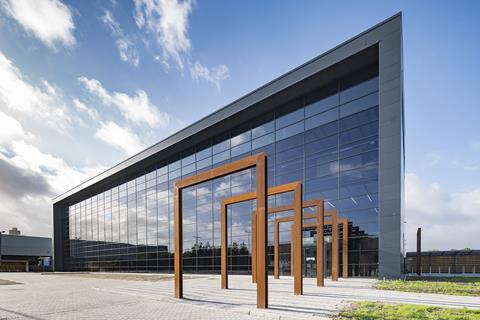 However, today many modern businesses like Elon Musk’s spacecraft venture SpaceX are placing their corporate HQs within or alongside their manufacturing space.

And in the future it’s anticipated that as greater automation and robotics are introduced to warehouses, more humans will make the switch from the factory floor to the office, which in turn could lead to the percentage of office space within industrial and logistics facilities increasing.

So how likely is this eventuality and how much office space are industrial and logistics occupiers currently looking to take?

According to Will Cooper, director and head of development project management, building and project consultancy at Savills, for the time being at least the office provision in most industrial and logistics facilities is pretty low.

“The office element of a warehouse is between 5% and 10% depending on how big it is,” he says. That is partly because landlords want to future-proof their buildings and ensure that if the current tenant leaves they are able to quickly find another occupier.

“You don’t want to over-provision,” says Cooper. “If you put too much office space in, it may put people off, so it’s about getting what the market thinks is right and having flexibility to add more.”

Andrea Ferranti, associate director at Colliers International, says that although demand for larger office space is an exception rather than the rule at present, some clients have gone down this route.

“We have seen the odd forward-thinking client trying to get extra [office] space, which could go up to 17% or 20%, but these are one-off instances,” he says.

Another senior industrial and logistics source says his company has also fielded a few requirements from occupiers where the amount of office space requested is higher than the traditional industry standard.

He agrees with Ferranti that such requests are the exception rather than the norm, however, he believes the Covid-19 pandemic could see a growing number of occupiers request more office space in their warehousing so that they can implement the government’s social distancing guidelines and future-proof their buildings should we experience another pandemic in the years ahead.

While such a shift in approach to the percentage of office provision in a warehouse is still largely theoretical, what has happened over the last few years is more landlords and occupiers have looked to enhance the standard of their warehousing to help them attract and retain staff.

“What we see is more investment both in and outside the warehouse,” says Ferranti. “Ten years ago, it would be just a box with some desks and lighting if you were lucky. Now we see shared facilities, green footpaths, new cycle lanes, extra trees, green walls in the offices. There’s more emphasis on the use of solar lighting, natural lighting, the design and layout in terms of spacing. It’s all about keeping staff happy in their office space.”

Stephen Ellis, senior investment manager at Federated Hermes, agrees with Ferranti that the role of the warehouse and the office space within it will become an increasingly important element of a businesses’ overall function.

“The office element within the warehouse may become more important on the back of this, in terms of the impact achievable operational efficiencies will have on the overall business, as well as meeting other key criteria, such as allowing greater breadth of function in one location or promoting staff integration; the visual position of the office element and entrance may also play a role in corporate identity, or [in] providing a venue for sales and product promotion. This will of course vary from tenant to tenant,” says Ellis.

He adds that in the future “warehousing locations are likely to be increasingly judged on a range of additional criteria, such as the extent [to which] they promote and meet the occupier or investor’s ESG values and requirements, or the working environment [that] the buildings, surroundings and amenities provide for staff on site”.

But while some industrial and logistics experts believe the amount of office space provided in warehouses will rise over the next few years, not everyone is convinced.

Jim O’Connell, divisional partner in Glenny’s business space agency team, thinks it is too early to predict which way the market will move in the future.

“While it’s inevitable that there will be an element of change, we can’t say right now if the next phase of speculative development will reflect a shift in office provision,” he says.

“What we do know is that with warehouses becoming more automated, we could see overall staffing levels reduce and this would impact the amount of amenity and office space provided, but this prediction predates the pandemic and reflects wider workplace changes as a result of newer technology coming into play.”

In the short term at least it appears unlikely that the current industry standard of circa 5-10% of office space in warehouses will significantly increase. But don’t bet against that benchmark slowly nudging up over the coming years as more companies look to go down the SpaceX route.