The year of radical collaboration

This week, Property Week  and UKGBC kick off the third year of our Climate Crisis Challenge, supported by lead partners Argent, Barclays and Mishcon de Reya and supporting partner chapmanbdsp. 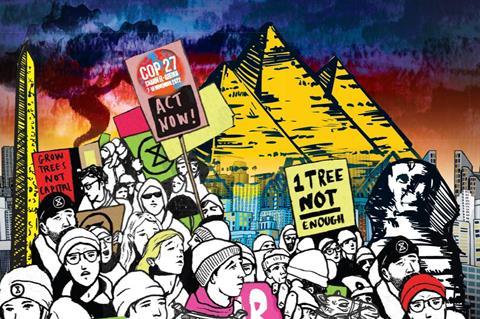 While year one was all about raising industry awareness, or the ‘why’, and year two was about preaching to the non-converted and the ‘how’, year three will focus on best-practice evidence, or the ‘what’.

This year, as well as reiterating our call to businesses and organisations to introduce robust net zero strategies, we have set out three primary campaign objectives.

First, amid soaring energy prices, we are calling on the industry to reduce its in-use emissions ahead of COP27 in Egypt. Second, we will be urging the government to plan for net zero by aligning the Planning Bill and its implementation with the UK’s net zero ambitions.

And third, we want the industry to showcase best practice not just undertaken within individual organisations but relating to initiatives undertaken in radical collaboration with others.

As UKGBC chief executive Julie Hirigoyen argues in her comment piece in this issue, the industry needs to go “further and faster”.

To establish where the baseline is, we are launching our third Climate Crisis Survey to find out not just how industry attitudes are changing towards the climate, but also what has actually been achieved to date and what is yet to be achieved.

Enter this year’s survey here, or complete the form below:

The achievements of the second year of the campaign show how far the industry has come – but also how far it has left to go. One major achievement of last year’s campaign was the surge in the number of UKGBC members signed up to the WorldGBC Net Zero Carbon Buildings Commitment.

From 2020 to 2021, thanks to growing industry awareness of the commitment supported by the first year of the Climate Crisis Challenge, the number increased from 16 to 42. Over the course of 2021, this figure rose again from 42 to 58.

1 ‘Reduce in-use’ – measure, disclose and reduce in-use energy in the buildings you control

3 Showcase best-practice and radically collaborate – share examples of what you are doing in terms of mitigation and adaptation, not just yourself but in radical collaboration with others

6 Through training and upskilling, embed ESG principles in your business

7 Define and deliver positive social value outcomes on all your projects, prioritising inclusivity

Just as more organisations signed up to the WorldGBC Net Zero Carbon Buildings Commitment, in September last year the commitment itself changed to include embodied carbon to keep up with the pace of change.

Karl Desai, senior adviser for advancing net zero at UKGBC, told Property Week at the time that the push to include embodied carbon in the commitment was something that WorldGBC had been working towards since the original commitment was introduced in 2018.

Sadly, this was not a view shared by the UK government. Despite minister for business, energy and corporate responsibility Lord Callanan saying at Property Week and UKGBC’s Climate Crisis Challenge Spotlight event in September last year that the government was “certainly looking at” including embodied carbon in its Heat and Buildings Strategy, the eventual strategy published in October did not include any references to embodied carbon – and there was only a fleeting reference to it in the Net Zero Strategy, which came out the same day. As Hirigoyen told Property Week at the time: “What we would like to see much, much sooner is a commitment – not just consideration for introducing – but a commitment that embodied carbon will be regulated at the earliest opportunity, supported by suitable data management and collection systems, tools and incentives for industry.”

The Spotlight event underlined increased industry engagement with the climate crisis. So too did the number of responses to the Climate Crisis Perceptions Survey published in April, which were up 40% on the year before.

The results also showed an increased appetite for change. The percentage of respondents who said that tackling the climate crisis mattered to them personally and that they felt equipped to tackle the crisis increased – from 92% to 94.5% and 47% to 56% respectively.

In response to this desire for greater action, last year’s Climate Crisis Challenge involved a significant focus on the practical steps businesses could take to achieve net zero carbon. This culminated in the launch of the UKGBC’s Whole Life Carbon (WLC) Roadmap at COP26 in November. UKGBC Scotland was also launched at COP26 in Glasgow.

While Property Week and UKGBC were at the summit, as were other notable property attendees, as Property Week reported at the time, the industry did not turn out en masse – which underscores just how far the Climate Crisis Challenge still needs to go in preaching to the non-converted.

As Susan Freeman, a real estate partner at Climate Crisis Challenge lead partner Mishcon de Reya, puts it: “This year, the campaign is about continuing this momentum and engaging a wider audience – while focusing on solutions and actual evidence that our industry is mobilising.”

Claudine Blamey, head of sustainability and digital strategy at fellow lead partner Argent, adds: “This year is all about action. We need to capitalise on the momentum of 2021 and deliver real solutions that make a difference to the world and people around us.”

Property Week and UKGBC’s three key objectives for the third year of the Climate Crisis Challenge are:

With energy costs set to soar this year, it is not just consumers who will be looking to address their ‘cost-of-living crisis’; there is also a golden opportunity for commercial landlords to address their energy performance and in-use emissions.

Energy management and reduction, energy efficiency improvements and a managed transition away from gas heating are essential.

The WLC Roadmap recommends that all building owners should establish “portfolio energy efficiency targets with clear milestones”. These should include reference to both the Roadmap itself and sectoral average EUI trajectories.

In addition, property businesses of all stripes should commit to sharing energy data regularly and transparently with all parties and collaborate with tenants to minimise operational energy through requirements clearly set out within green leases.

Building owners and landlords should also implement portfolio-wide plans to transition away from fossil fuel heating.

Climate was a critical omission in both the government’s Planning White Paper and Levelling Up White Paper. The former was published in August 2020 and the latter was published this month. Worryingly, neither are aligned with the government’s legally binding targets to be a net zero emitter of carbon by 2050 and to slash emissions by 78% by 2035 compared with 1990 levels.

Setting a clear, holistic approach to climate in planning is also vital for industry.

Many local authorities have declared climate emergencies, showing leadership by setting their own higher climate and environmental standards.

While local flexibility is essential, it has resulted in very different approaches from authority to authority. Central government needs to develop a consistent approach to measurement, reporting and compliance that is easier to navigate, robust and consistently delivers sustainable outcomes, while empowering local authorities to continue leading the way and set their own targets.

To that end, Property Week and UKGBC are calling on the government to ensure the new planning system is aligned with the Climate Act, so every planning decision – whether it is on a 200,000 sq ft office development or a residential extension – is in line with the government’s national carbon budgets by law.

As Guy Grainger said in a recent interview with Property Week, rising to the Climate Crisis Challenge should not be about gaining competitive advantage, or a proprietary matter: it should be about “radical collaboration”.

Only through such collaboration will the whole industry be galvanised into action and be able to reduce carbon emissions.

Throughout the third year of our Climate Crisis Challenge, we want to foster this spirit of “radical collaboration” by showcasing examples of sustainability best practice throughout the industry.

We will do this throughout the year across our online, print and social media coverage.

We also want to encourage businesses to share best practice with each other. Agents need to share knowledge with agents, developers with developers, landlords with landlords and investors with investors.

Throughout the last two years of this campaign, the property industry has shown that it is open to ideas that would have seemed far-fetched a decade ago. This is encouraging to see, but it is nowhere near enough.

If we want to have any hope of rising to the Climate Crisis Challenge and becoming a net zero carbon economy, every stakeholder needs to rapidly and radically ratchet up their ambitions.

We need the government and the property sector to come together now, in a spirit of radical collaboration, and forge a clear path towards a better future for our planet.