To retrofit or rebuild? That is the question

For years, conversations about sustainability in the built environment focused on operational use – the carbon emissions generated once a building is occupied. But spurred on by Property Week’s Climate Crisis Challenge campaign and sister publication Architects Journal’s Retrofirst drive, the debate has moved on. 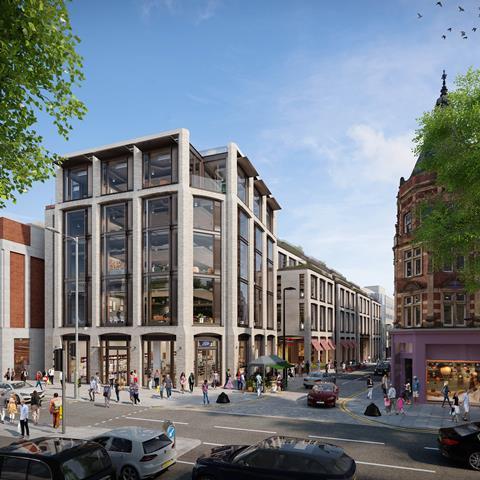 The big question now is whether to knock down a building and replace it – squandering the embodied carbon – or to find a way to retrofit or refurbish the asset.

So where has the debate got to – and whether the answer is to retrofit or rebuild, what does it mean for real estate?

The drive to retrofit has gathered momentum over recent years and is still favoured by many. It is certainly the preferred route as far as Sean Clemons, managing director at consultancy RLF, which has just been acquired by MGAC, is concerned.

“There’s been a historical tendency for the industry to want the shiny and the new almost instinctively, but there is a growing and encouraging emphasis on the refurb case, as the environmental agenda gathers pace,” he says.

It is a viewpoint shared by Lora Brill, head of responsibility and ESG at Orchard Street.

“Repositioning and refurbishing existing buildings to meet the evolving needs of society and the economy allows us to reuse building materials and historic sitework, which can reduce emissions significantly when compared with a new build,” she says.

As an example, Tom Smithers, property director at AshbyCapital, cites his company’s recent development, The Kensington Building, which he says boasts 35% less embodied carbon than a typical new-build office thanks to the reuse and repurposing of as much of the previous building as possible. That included 78% of the substructure and 48% of the superstructure.

“With the built environment contributing about 40% of the UK’s carbon footprint, it’s imperative that investors and developers look beyond the operational carbon footprint of their buildings to the emissions produced in the construction process and embodied carbon,” he says.

While late to the party, the government is also now actively looking at embodied carbon. In the build-up to COP26, it released its much-anticipated Net Zero Strategy, which aims to provide a route map towards that 2050 target.

It declared an intention to improve reporting on embodied carbon in buildings and infrastructure, with a view to exploring a maximum level for new builds in the future.

Julie Hirigoyen, chief executive of UKGBC, welcomes the move, but urges the government to move more quickly. “We believe the industry is ready to take meaningful action,” she says.

“We are therefore calling for a commitment to introduce the regulation on embodied carbon at the building level at the earliest opportunity, starting with mandatory measurement of whole-life carbon on large projects.”

Measuring a project’s whole-life carbon – ie the carbon involved both in its materials and produced from its operation over its lifetime – is already seen as best practice, although commentators agree that it is not always particularly straightforward to do.

In many cases, the more environmentally friendly option is to retrofit a building using materials that are as sustainable as possible, while at the same time maximising its energy efficiency.

However, it is difficult to bring an older building up to the levels of efficiency that are possible using cutting-edge technology in a new build. 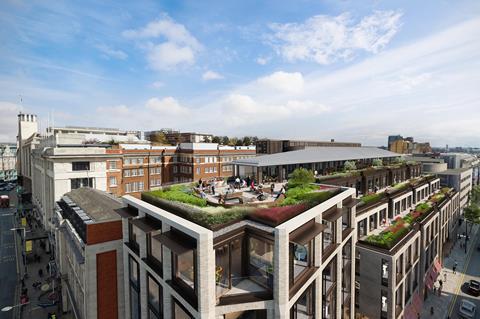 Old and new: AshbyCapital reused as much material as possible when refurbishing The Kensington Building

“While savings in embodied carbon from the refurbishment of an existing building will play a crucial role in helping the building industry reach its net zero carbon ambitions, the approach needs to be considered in parallel with potential savings to be made in energy demand reduction and operational energy consumption,” says Yetunde Abdul, UKGBC’s head of climate action.

“Where none are identified, starting afresh and replacing the existing asset with a high-performance, low-embodied design may be preferable.”

However, Matthew Bonning-Snook, property director and chair of the sustainability committee at Helical, says very high standards can be achieved with retrofit projects.

“I think it absolutely can be very efficient, because where you are going right back to frame, you have the opportunity to put in new cladding, mechanical and electrical systems and so on.

You can certainly bring it up to high standards.”

The central question is how long a building will be used post development. If the highly energy-efficient building lasts long enough, at some point the lower operational carbon will compensate for the lost embodied carbon in the demolished structure.

The period of time will vary. Hence the need to measure whole-life carbon from the outset.

Other factors also need to be considered. For instance, buildings can be incredibly energy efficient, but they still use energy, and knowing where that energy is coming from is an important part of the calculation.

There may be other benefits to rebuilding new to be considered

“You’re looking at how quickly the grid can be decarbonised and what the overall energy demand of the building is,” says Jestico.

“We know the government has said that the electricity grid is going to be decarbonised by 2035, so you can put that into your emissions calculations.

“We can conduct pretty accurate models of a building in operation now. We can essentially create a digital twin of a building and predict how it’s going to perform over its lifespan.”

Ed Dixon, head of ESG, real assets, at Aviva Investors, agrees. “We’re at the point in the market where we’re able to assess the options very accurately and make a judgement call based on those projections,” he says.

“That has moved an awful lot in the past five years. Even five years ago, you would probably have struggled to get accurate embodied carbon projections.”

Jestico argues that models need to build in a certain amount of contingency planning.

“There is a degree of prediction about it, so when you’re doing these sorts of predictions you should always run several analyses. If my inputs changed by plus or minus 10% to 15%, does it affect the outcomes and the conclusions?”

Abdul adds that weighing up the sustainability of different approaches shouldn’t just be about carbon.

“While carbon is a primary consideration, there may be other benefits to rebuilding new that should be considered if approaching sustainability holistically,” she says.

“Health and wellbeing, social value, biodiversity and climate resilience are all factors that are likely to be impacted differently as a result of building new rather than refurbishment, and these wider implications should form part of the conversation.” 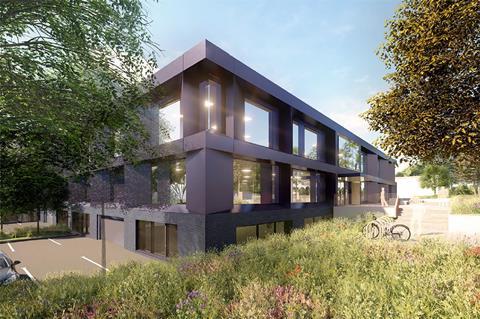 The choice of core materials used is also important. Steel and concrete are notoriously carbon intensive to make, but great efforts are being made to try to make the process more environmentally friendly.

“There is so much going on in this space with constant developments and innovations,” says Abdul.

“Steel has the benefit of being easily recyclable, but [achieving] that through zero carbon means is non-trivial. Electric or zero carbon hydrogen furnaces that are 100% renewable are being touted as potential solutions for processing or recycling steel in a low-carbon way.”

Similarly, changes to concrete production, including replacing cement to lower carbon emissions, are under way, while the government hopes carbon capture, utilisation and storage (CCUS) technologies will play a big role in decarbonisation more generally. “Do these and others pass muster or is it essentially greenwashing?” asks Abdul. “Only time will tell.”

“We decided to carry out a back-to-frame refurbishment on a dated office rather than replace it with a new build,” he says.

Experts agree that if the decision is made to go with a highly efficient new build, it will need to last for a long time. If a new owner comes along and decides to knock a building down and start again after only a couple of decades, all those careful calculations will have been for nothing. “People knock down buildings that are 15 years old, which should be a crime,” says Jestico.

Good-quality houses do not tend to get demolished on a whim, whether or not they happen to be listed or protected. Victorian terraces remain popular and could still be around in another 100 years.

Commercial buildings, on the other hand, do not tend to last so long, primarily because the way offices and shops are used changes over time. It is for this reason that many in the industry argue that commercial buildings should be designed with future adaptability in mind.

“Sustainability is about changing the worst stock we’ve got today that’s not efficient and producing something that we can use for the future.”

It can be difficult to retrofit adaptability into an existing structure, which makes it more likely that a building would need further work in the future or to be knocked down.

“What it could mean is ultimately, in 30 to 40 years, guess what you’re going to do? You’re going to refurbish it again. And therefore, the embodied carbon you put back into refurbishment actually counters what you should have done in the beginning, which is the long-term vision.”

The intricacies of the debate surrounding whether to retrofit or rebuild are many and varied. What is encouraging is that the industry is having the debate in detail and in earnest.

“I think it’s a recognition, particularly from the architecture and the engineering professions, that we’re in an emergency,” says Dixon.

“We’ve seen a huge change and a real groundswell of interest and appetite from professionals. People are going into work every day designing buildings and they want to do it better. That’s a really positive, fantastic thing.”

Time will tell which prevails and if we see meaningful and lasting change.