View from the top: Brian Bickell, chief executive of Shaftesbury

When videos surfaced on social media of people enjoying the reopening of pubs in their swathes in Soho in July, some people were worried restrictions had been eased too soon. 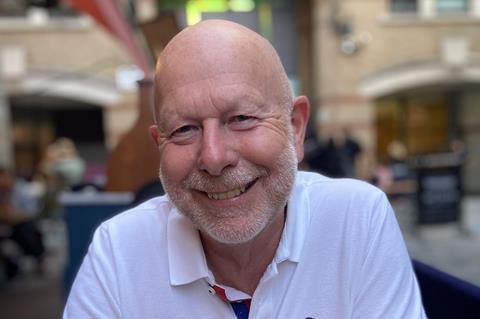 Brian Bickell, chief executive of West End landlord Shaftesbury, was in the area at the time. “I was on Old Compton Street that Saturday night,” he recalls. “My general view is that young people are not the slightest bit interested in social distancing.”

He adds that the close-knit groups of revellers celebrating the end of lockdown restrictions were contained to just a few streets in Soho and generally speaking the area remains pretty quiet.

“Even when you walk around in the day, it is younger people who are getting on with their lives. Older people just seem reluctant to do anything,” he says.

So what does Bickell think needs to be done to close the generational gap and encourage people of all ages back to shop, eat and drink in the capital?

Most of Shaftesbury’s tenants are in the F&B sector and have had a tumultuous time since the outbreak. The first London area to close was Chinatown and many West End businesses followed suit a few weeks later.

Reopening has been a slow process since restrictions were eased. West End footfall is running at about 20% of pre-Covid levels. Some of Shaftesbury’s tenants are keen to open again, but Bickell says low usage of the underground and the large number of people still working from home don’t make it viable economically.

“They won’t open until there is more footfall and more people won’t come into the West End until everything’s open, so they’re slightly hamstrung at the moment.”

While the government claims its ‘Eat out to help out’ scheme has been a resounding success, Bickell is not convinced the £10 per head voucher has made a meaningful and lasting difference to the landlord’s

“It’s just a gimmick really and it doesn’t get you very far with a meal in the West End,” he says. “The bigger picture is that people are nervous about going out and going to restaurants. It’s about breaking down those barriers.”

Although he accepts Covid-19 has been a huge challenge for the government, he is not impressed with the way it has handled the crisis.

“The way they go about things and the lack of decisiveness about everything; it’s just a bit wishy washy,” he says. “You’ve got to take decisions. That’s what leadership is all about.”

“In France for instance, you have to wear a mask when you go into the restaurant and if you move around, but at the table, you don’t have to. It’s things like that, getting used to wearing masks, which will make people feel much safer about the whole thing. But again, you just need to have some rules.”

In the absence of rules and any meaningful support for landlords from government, the likes of Shaftesbury have had to set their own ground rules. For Bickell, the key to unlocking the area’s recovery is helping tenants get back on their feet.

To this end, Bickell and his team have worked closely with Shaftesbury’s tenants to help them through the crisis.

The company put together a package of support for tenants for the six months up to the end of September, the end of its financial year, and Bickell says the support could continue beyond that to at least nine months. “We’ve always thought this was going to be a long road to recovery,” he says.

Meanwhile, Bickell accepts that he is likely to collect no more than 50% of the rent due for the six-month period.

“Our ambition is to get back 50% of the rents, but a lot of that will be on a deferral basis,” he adds. “We’ve said to tenants they can extend their lease and pay it back gradually over the next couple of years. We’ll be returning to normal very gradually anyway, so we’re not pushing people to pay anything.”

Bickell says that every tenant is different and should be treated differently. It is a stance that, in his view, sets Shaftesbury apart from other landlords, some of which he believes have behaved badly during the pandemic.

“When we come out of all this, people will remember how certain landlords have behaved and we want to show that Shaftesbury isn’t a fair-weather friend,” he says.

It needs to support as many tenants as possible. Valuers slashed £87m off the value of Shaftesbury’s portfolio on the basis of a “Covid-19 income and occupancy assumption”, according to the company’s half-year results ending in March.

This fall in value comes at a time when landlords have the tough task – and additional cost – of making buildings ‘Covid-compliant’ while also trying to push ahead with ambitious carbon reduction targets. 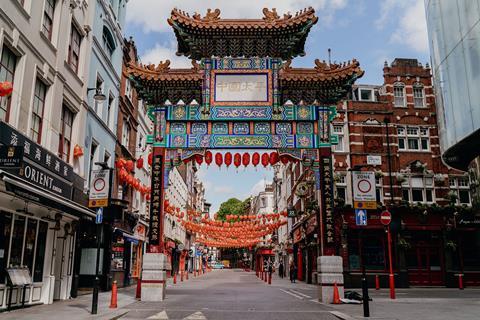 Running on empty: China Town, part of Shaftesbury’s estate, was one of the first London areas to enter lockdown

For Bickell, the climate agenda is a business critical one that even a global pandemic should not detract from. Buildings will become unlettable if the issue is not addressed, he argues.

“The bar is being raised all the time,” he notes. “You won’t be able to let space if it doesn’t meet those basic requirements. Businesses are going to ask about that sort of thing before they sign up for the space.”

Given that the average age of buildings in Shaftesbury’s portfolio is more than 150 years, reducing its carbon footprint will be no easy task.

“Older buildings can never be as efficient as modern buildings, unless we pull everything down, which we’re realising is not very sustainable,” says Bickell. “It’s all about embedded carbon in buildings; we should try and preserve that. But our buildings are never going to be perfect. Plus, 20% of them are listed.”

The FTSE 250 company had intended to publicise its membership of the Better Buildings partnership and its Blue Turtles scheme in Carnaby Street this year – a collaboration with ocean conservation charity Project Zero – but the pandemic has “derailed” these plans.

Another drama Bickell has had to deal with over the last few months is the exit of major shareholder Samuel Tak-Lee from Shaftesbury and the purchase of his 26% stake by Covent Garden landlord Capital & Counties (Capco).

“It was a bit of a surprise, I have to say,” he chuckles. “The litigation [with Tak-Lee] has been rumbling on for 12 months and we were still getting letters from the lawyers about this while we were in lockdown. We had a court date for 20 June 2021 and I thought, ‘Great, it’s going to go on till next year’.”

The back and forth between the two parties has been frustrating, he admits.

“Mr Lee had his own view. We never met the man. It’s weird, he’d been on the share register for six years and refused to meet us a number of times when we asked,” elaborates Bickell. “I wouldn’t say it’s been a distraction, but it’s very frustrating because we always try to know our tenants very well and to talk to our shareholders as well and see what they expect of us. And he just wouldn’t do that.”

Capco’s purchase of Tak-Lee’s stake put an end to the legal dispute and Bickell has high hopes that the company can build a strong relationship with its new shareholder, which also happens to be Shaftesbury’s next-door neighbour.

“We’ve always taken the view that people don’t care who owns the West End; they just look at it as a good experience as a whole.Capco has done a lot to turn the [Covent Garden] piazza around over the past 10 to 15 years as it was desperately dull before.”

Shaftesbury has already worked with other West End stakeholders such as The Crown Estate, Great Portland Estates, Grosvenor and Capco to create more pedestrian space as the government lifted restrictions on non-essential shops.

“None of us could bring back the West End on our own, but working together as a group is the best support we can give each other really,” says Bickell.

Another issue Bickell has been mulling in recent months is the ‘Black Lives Matter’ movement and the lack of diversity in the property industry.

As an openly gay man, Bickell says his experience of the real estate industry is “nowhere near as bad as it was” when he started his career. He adds that Freehold, the networking forum for LBGTQ+ people, has been a “game changer” for the industry.

“There was nothing like it when it started nine years ago, but now we’ve had over 1,000 members in London and other groups have come out of it in different parts of real estate and it is starting to change attitudes.”

“If we want to attract bright, creative people into an industry, they’re going to look at real estate and think, ‘I don’t want anything to do with that’. This past 17 weeks or so has accelerated it all,” says Bickell.

He adds that since he joined the industry in the 1980s, it has always “looked inwards, not outwards”.

“Its view of the world is very much property centric and it doesn’t seem to understand – or want to know – what went on in buildings, for instance.”

Shaftesbury has been doing what it can to redress the balance. One initiative was the introduction of ‘blind’ CVs in the recruitment process, but Bickell admits this hasn’t worked out how he’d hoped.

“We asked for blind CVs and the HR consultant who’s worked with us for a couple of years and is involved in the recruitment of young surveyors [for us] says they all look the same – like they’ve been turned out by factory. They all do the same thing, have the same gap year and all like rugby and cricket. She couldn’t believe it. That is what we’re facing.”

Whether the tenacity of landlords such as Bickell will be enough to mitigate the forthcoming difficulties the industry faces remains to be seen.