Duncan Owen is finding life in lockdown a blessing and a curse. On the one hand, he has been able to spend more time with his family. On the other, work is intense and his 19-year-old son, who has moved back home from university during the lockdown, has taken a fancy to his stash of good red wine. 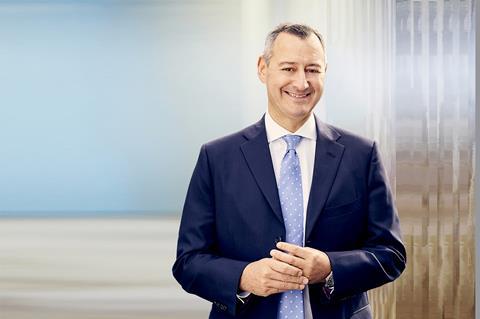 The global head of real estate at Schroder Real Estate Investment Management spends most of his time in the office or travelling for work so, depletion of red wine stocks aside, says he has relished the new work life balance. “It’s been a little bit like Christmas without the presents,” he says.

However, he adds, the first few weeks of lockdown were frantic on the work front.

“The outbreak coincided with rent needing to be collected,” he says. “We’ve got around 6,000 tenants and we needed to speak to most of them. Once that was over, I think there was a collective sigh of relief.”

Now, as Boris Johnson gears up to unveil his lockdown exit plan, Owen reflects on how Schroders, which has around £16.3bn of real estate assets under management, has responded to the pandemic and reveals why he remains optimistic about the future.

First, though, Owen gives a shout out to his team, which has had to rapidly rethink its priorities in the face of Covid-19.

“The lockdown has brought out a lot of teamwork, which has been amazing,” says Owen. “Everyone knows everyone else is working hard and I think people are looking at whether they’re doing this for the right reasons. I’ve seen the team really re-calibrate which jobs are important.”

Owen sees parallels between the current crisis and the early 1990s recession. “What is similar is this is affecting the real economy rather than the financial one. Consequently, unemployment and job risk is going up. We should pull through it and avoid a depression, but it will affect sentiment.”

One reason Owen remains positive is the continued investor appetite for real estate funds. He cites Schroders’ debut hotel fund, which raised €300m (£255m) in its first close at the end of January. That doesn’t mean he is in any rush to snap up assets.

“I don’t think there’s a traditional window of opportunity where if you don’t invest by October, it’s too late, the price will bounce back up,” he contends.

“There’s a time for patience and sensible capital in terms of investing. The right opportunities will come through.”

Through what Owen calls a combination of “intention and fluke”, Schroders is in a strong place to weather the storm.

“We did an awful lot of sales in 2019 as we were worried about market pricing and the market itself. We were also fortunate in that it was the right time to sell a number of projects where we’d refurbished and repositioned assets. We also had very low leverage across our European and UK strategies.”

Conserving cash is a key part of Owen’s strategy. “Our investors used to say: ‘We don’t like the fact that your REIT is so long in cash; it’s going to be a drag on performance’.”

We should pull through and avoid a recession, but it will affect sentiment

He recalls a specific incident when he was grilled at a shareholder meeting about the balance sheet, which was a third liquid. He told shareholders the market was about to correct.

“Of course, we didn’t think it would correct in this way for this reason, but that turned into being much more of a strength.”

Looking ahead, he expects to see an acceleration of existing trends rather than emergence of new ones.

“I think the biggest thing [the pandemic has caused] is that it has accelerated structural changes that were, by and large, already in motion,” he elaborates.

“For example, a move towards flexible working, the attack on physical retail and the demise of airports — the pressure to fly less because of carbon footprint was already there.”

On the issue of tenants being granted rent holidays, Owen says he doesn’t have a particular problem with it, as long as landlords are also offered help.

“All aspects of the property food chain need to be treated equally,” he reasons. “If you say to all tenants they don’t have to pay the rent, you need to give equal support to landlords.

“They need to get relief from the bank in the same way as tenants. A lot are pension funds and insurance companies.

“I think it’s inequitable for tenants if they say they can’t pay the landlord the rent, but wish to continue to pay shareholders dividends — that’s just a transfer of wealth from the pension fund owners to the shareholders.”

He believes a backlash against this type of behaviour could be one of the few positives that comes out of the crisis.

“The most compelling thing that is happening at the moment is a real shift against inequality,” he argues. “A lot of people across the generations will be thinking very differently after this.”

As will a lot of real estate players. The good news for Schroders is that, under Owen, it already was.